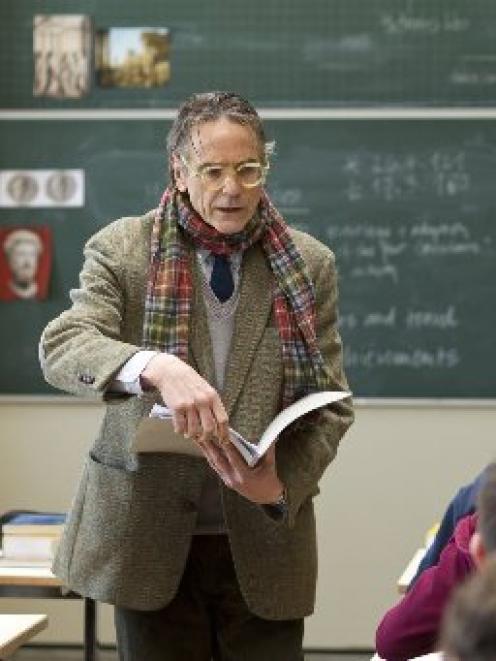 Raimund Gregorius (Jeremy Irons) plays chess with himself in the evenings and recycles teabags in the morning.

By day he is a professor of Latin and ancient languages with disastrous taste in spectacle frames. Worst of all, he is living in Switzerland.

Things are pretty dire. Few do quiet desperation like Irons.

Fortunately for him, an opportunity arises to save a young woman from jumping to her death.

She soon departs the scene but leaves in Prof Gregorius' possession a book and a ticket on the night train to Portugal.

Intrigued and with nothing better to do, the professor catches that train and during the trip becomes fascinated by the contents of the book.

Now, everyone knows a little about Franco's Spain - anarchists, fascists and George Orwell - but Portugal had its own dark days under the heel.

It turns out the author of the mysterious book was quite involved and the professor is drawn into a tale of brutality, heroism, loyalty and love in Lisbon of the early '70s.

While the inscrutable Portuguese tend not to talk about those days, we are told, they all agree to talk to the professor.

This includes Rampling, doing a fine job of desperate loneliness, and Courtenay, enjoying himself as an embittered old revolutionary.

Some nice twists and turns keep the tale bubbling along.

Best thing: The film provides lots of opportunities for voice-overs by Mr Irons. He has a lovely voice. Takes you back to Bridey.

See it with: A fan of Jeremy Irons. Most people over 40?