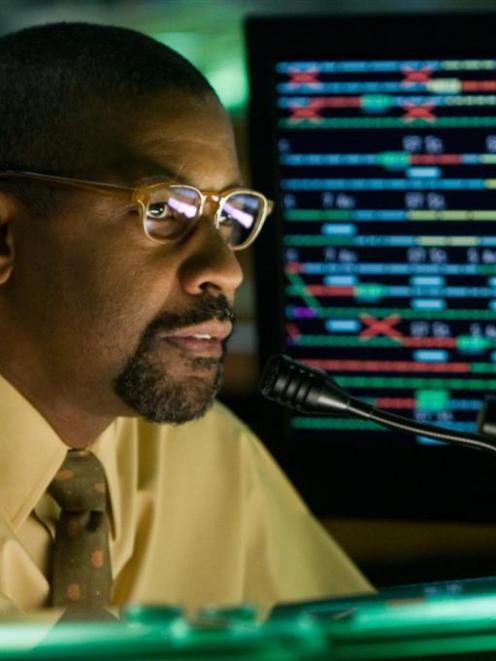 Denzel Washington in 'The Taking of Pelham 123'.
Satisfy your action cravings...

The omens for The Taking of Pelham 123 aren't good.

A goateed John Travolta, complete with prison neck tat, stalks menacingly (or as menacingly as Travolta can) along a subway platform supported by a crew of caricatured thugs.

We are left in do doubt as to where the perfunctory hostage plot is going, especially when we meet a rather tired-looking Denzel Washington tucking into lunch over his subway control station.

Add some half-baked story beats involving financial sabotage, New York traffic, Catholicism and the resurrection of a failed man ... and you have a high-stakes drama that is only slightly less claustrophobic than Phone Booth. Except that for most of its 121 minutes, director Tony Scott's latest piece of mainlined testosterone satiates every boy's-own action cravings.

There is some awesome cinematic-choreography. Cameras whizz, lift, drop, spin and do just about any form of movement invented for capturing images.

The Taking of Pelham 123 is guaranteed to keep any aspiring shooter and editor pinned to their seats.

As a remake of the relatively successful 1970s original, The Taking of Pelham 123 doesn't add 30 years of wisdom.

What it does do is take you on a whistlestop trip across Manhattan at angles that only the finest film technology can provide.

If you can abide cringe-worthy scripts, over-the-top stunts, and "what a guy" posturing, then The Taking of Pelham 123 is probably not a bad way to disengage the brain.

Best thing: The race to transport $10 million in cash across New York in rush hour.

See it with: A six-pack of energy drinks.