Kate and Anne buddy up 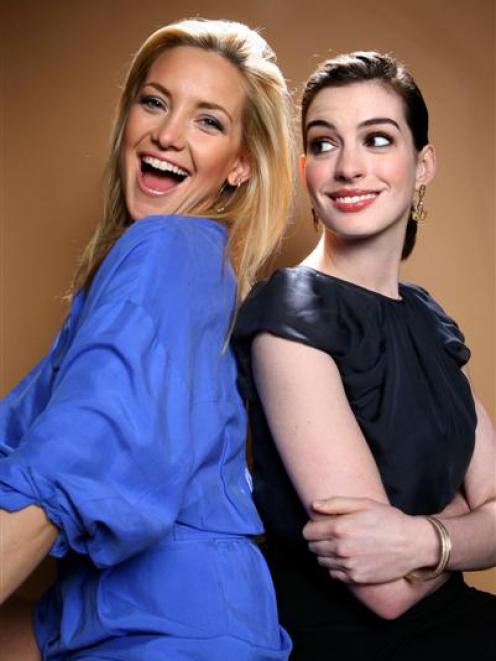 Kate Hudson (left) and Anne Hathaway are happy to star in the female-driven comedy Bride Wars. Photo from Los Angeles Times
So who takes longer to get dressed? That's a no-brainer when the choice lies between Kate Hudson and Anne Hathaway, the two young actresses who play best friends turned battling bridezillas in the new film Bride Wars.

When the question is posed during an interview with the two leading ladies, Hudson instantly turns to Hathaway, who looks guilty as charged.

"Yes, it's true," says Hathaway, best known as the star of The Devil Wears Prada and now Rachel Getting Married, with self-recognition flashing in her large brown eyes.

"I find the outfit, then I'm literally one step from the door and I'll look down and something will catch my eye and I will have to go back and start from scratch.

"It's not even for me that the results are so great. I just have to find the thing that I'm comfortable with or I'm going to be a basket case all day.

"I'll walk out half-naked," interjects Hudson, who first caught the public imagination nearly a decade ago as a trippy groupie in Almost Famous.

"I have this thing, if it takes me longer than 10 minutes to get dressed, I'm not going anywhere. I'm not in the mood."

Perched side by side on a fancy hotel room couch, the duo are giddy and chatty, so much so that they talk over each other, and to each other, as they discuss their new movie and related tangents - boys, clothes, what makes a movie star and weddings.

Periodically, Hudson bursts into song - her whole life appears to have some internal soundtrack, and she could definitely give any jukebox a run for its money.

Their outfits more than illustrate their perspectives on dressing, and perhaps on life.

The 26-year-old Hathaway is crisp in a black structured sheath, her hair pulled back tight in a soignee ponytail to reveal the luminous white skin and the famed doe eyes.

Hudson (29) is loose and sun-kissed and Californian, wearing what appears to be a blue silk shorts jumpsuit, and unconsciously flipping her long, blonde tresses.

Both wear stilettos but no stockings.

While weddings are a familiar trope to Hollywood comedies, spawning such films as Wedding Crashers, The Wedding Planner and Four Weddings and a Funeral, Bride Wars is not so much about the romance between a man and a woman; it's a female buddy picture, a counterpoint to the "bromance" films that have swept Hollywood recently, the endless stream of male bonding tales like Superbad, Role Models, Stepbrothers and Pineapple Express.

Such is the state of opportunities for young actresses in Hollywood that neither Hudson or Hathaway (whose collective resume includes such hits as How to Lose a Guy in 10 Days and the Princess Diaries movies) has ever starred in a film opposite a female peer.

"One thing we were drawn to is it's a story about friendship," says Hathaway.

"To actually have the story line between two women was just . . . so refreshing.

"Two movies I grew up loving were Romy and Michele's High School Reunion and Muriel's Wedding.

I loved those movies and it occurred to me - I haven't been doing this very long and I don't mean to be stepping up on a soapbox or anything - but I've read a lot of different scripts since I've become an actress and I've never come across a female buddy comedy before. Never."

"It's really rare," agrees Hudson. Female comedies, female-driven movies are hard to get made."

The reality underlying the film Bride Wars is that two of the most eligible women on the planet are without steady guys for the moment.

"For the first time of my life, for a bit of a stretch, I've been totally without that distraction," says Hudson, who admittedly loves being in a relationship and has been romantically linked by the tabloids to Owen Wilson and Lance Armstrong.

"I'd never recognised what I was, alone as an adult . . .And it's nice to discover that about yourself."

"I am that girl who goes off with the guy and then looks back and goes, 'I have all these other relationships. Why did I neglect them?' The concept of always needing to be together - that's such bad advice.

"You need to keep your sense of self, your life, your background, your history."

"That's what our movie is about," says Hudson.

"You get carried away by all these things, the relationships, the wedding, the dreams," says Hudson.

"And then suddenly, you go, `Wait a minute, I need my girlfriends!'." 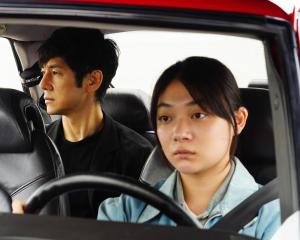 From page and stage to the screen