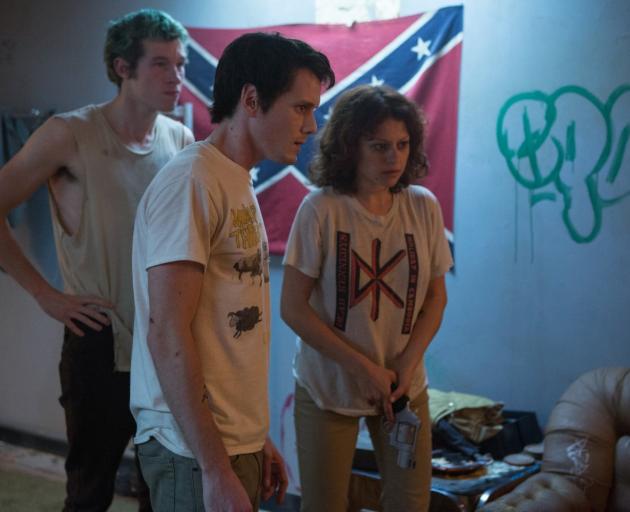 One of the most terrifying moments in Green Room comes just 15 minutes in, when punk outfit The Ain’t Rights, the heroes of our story, provocatively belt out a cover of the Dead Kennedys’ classic, Nazi Punks F... Off, to a hostile audience of skinheads.

It’ll ring true for anyone who’s experienced that kind of extreme tension at a gig, when it feels like the crowd might attack the band or vice versa, and it exemplifies the feeling this music can conjure  in the right hands.

For ordinary viewers this should hopefully be the most directly relatable aspect here, as what happens next makes it look like a long-haired lovefest by comparison, when the out-of-their-depth band members, having finished playing at this neo-Nazi dive just south of Nowheresville, witness the aftermath of a murder in the backstage green room.

As they fight to escape their increasingly worsening predicament, the undercurrent of menace is ratcheted up to full-blown intensity once bar owner Darcy (Patrick Stewart) arrives.

Playing irresistibly against type, Stewart is unassumingly sinister, if underutilised, but the extensive supporting cast are great also, particularly the late Anton Yelchin who, as the mild-mannered, perpetually startled bassist Pat, gives the most affecting performance on offer.

At its core this is a horror/thriller that, like a good punk song, aims to hit you squarely in the gut, and for the most part it’s suitably nasty, brutal, bloody and efficient, if not quite as ingenious or chilling as I would have liked.