A new kind of fame for Sienna 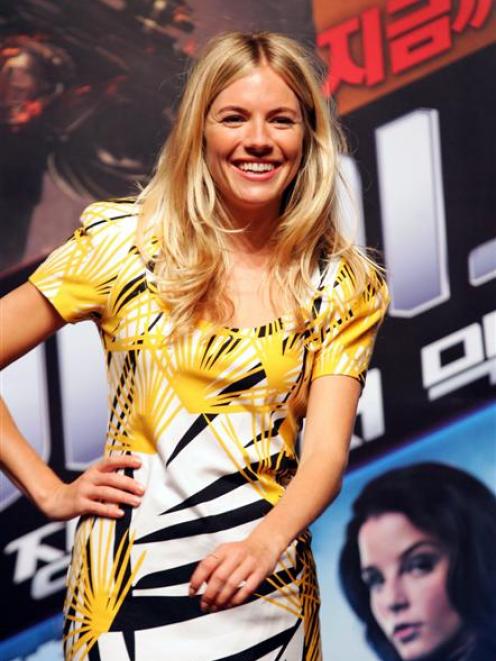 Actress Sienna Miller attends the G. I. Joe: The Rise of Cobra press conference at the Shilla Hotel, in South Korea.
As the shoot-'em-up would-be blockbuster G. I. Joe invades cinemas around the world, one of its stars faces the very real risk of genuine fame, Amy Argetsinger reports.

And she's suffered, so prettily, the burden of her fame: The humiliating break-ups laid bare in the press.

The blow-back from careless interviews.

The "homewrecker" catcalls in the blogosphere.

The shame of topless photos, caught on vacation, all over the tabs; all the horrible invasions of privacy.

Right about now you're thinking: "Who's Sienna Miller again? Remind me why I'm supposed to know her?"It's OK! There's absolutely no reason you should know who she is, not even if you're a religious follower of the celebrity press that tracks her so closely.

She's an actress, but odds are you've never seen a single one of her movies.

Miller's fame is of the kind that is disconnected from the star's success in the field for which he or she is ostensibly famous.

Sienna Miller is not famous. She is famesque.

Famesque is not the paradox of the unlovable A-lister - the Nicole Kidman types who win all the awards but lose the hearts of the multiplex.

It's not the quandary of the shrinking star (Ricky Martin), gossip-bait still on the strength of a few decade-old monster hits.

The famesque are distinct from their has-been cousins who extended their run via reality shows or the train wrecks (Lindsey Lohan) whose detour from genuine fame is compelling because they had it and blew it.

The famesque of 2009 are descended from that dawn-of-TV creation, the Famous for Being Famous.

Turn on a talk show and there'd be Zsa Zsa Gabor, Dr Joyce Brothers, Charles Nelson Reilly, so friendly and familiar and - what was it they did again?

But the FFBF always seemed to know how marginal they were - that was their charm.

And they never, ever made the cover of People.

The truly famesque possess the seeming gravitas that comes with a title and the suggestion of a job - actor, singer, pro-athlete.

It's just that ... you've never seen them act, or heard them sing, or watched them play.

Instead: You read about them. A lot.

There was a time when the growth of our worldwide round-the-clock entertainment-news industry was gravely threatened by the fact that there weren't enough legitimate celebrities to power it - until the famesque stepped in to fill that market niche.

Because, hey, it's not every day Mel Gibson gets drunk and insults a cop.

So: Sienna Miller, the most famous obscure art-house film star in history.

The celebrity press often drops the name of a star's most recent or biggest project to remind you who they are.

For Miller, it's Factory Girl (2006), in which she starred as drug-damaged '60s scenester Edie Sedgwick.

You didn't see it, right? It made only $US1.6 million in US theatres.

Miller's biggest-grossing movie was the fantasy-adventure Stardust, in which she was billed about sixth or seventh behind Michelle Pfeiffer and Robert De Niro.

Not that you saw that one either: It made only $US39 million, not a lot for that kind of thing.

Then how'd she become so famesque?

Us Weekly news director Lara Cohen, who says she's been with the magazine "since the era of Bennifer One," says it started with being incredibly photogenic.

Maybe five years ago, Miller had one big hit film in the UK (Layer Cake, in which Daniel Craig starred and Miller played a relatively minor love interest) and a lot of buzz.

"So we were seeing a lot of photos of her. But she was interesting as a style icon in a way that Jordan or some of the other British celebrities were not."

(We don't know who Jordan is either.)Miller gained momentum, Cohen says, with her knack for "no-holds-barred, watch-your-mouth interviews".

As during the filming of The Mysteries of Pittsburgh, when Miller, interviewed by Rolling Stone, slammed her host city as "[rhymes-with-Pitts]burgh".

Says Cohen: "It was the most publicity that movie got". (It grossed less than $US100,000.)And Miller harnessed the power of celebrity dating, where "one plus one equals four," Cohen says.

Miller became famesque by dating actor Jude Law, then really famesque when he cheated on her with the nanny - to the point that she was the one who made Balthazar Getty famesque (even though he's the one with the hit TV series, Brothers & Sisters) when he reportedly left his wife for her for a while.

But Miller's groundbreaking famesque is threatened.

She stars in G. I. Joe: The Rise of the Cobra, a big dumb movie now playing on thousands of movie screens.

By now it's possible that millions have seen Sienna Miller on the big screen.

What happens then? Will we lose interest? Will she stop saying provocative things or dating messed-up dudes? (Cohen's not worried: "She has a really great publicist. One of the best in the business".)