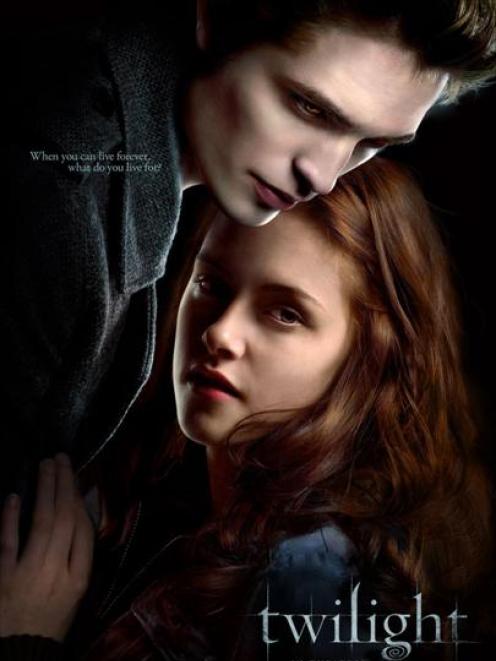 The stars of 'Twilight', Robert Pattinson and Kristen Stewart.
I am not now nor have I ever been a 13-year-old girl, but Twilight made me wish I could be, at least for a couple of hours, the better to appreciate a movie that has been targeted at that demographic with the delicious specificity of a laser weapon.

In case there are no teenagers in your immediate vicinity, Twilight is based on the book by Stephenie Meyer, the first of a quartet that has sold 17 million copies worldwide and been translated into more than 30 languages.

Meyer is not exactly a great literary stylist, but she has come up with one heck of a romantic concept.

But let her 17-year-old heroine, Bella Swan, beloved of Edward Cullen, tell you all about it:

"About three things I was absolutely positive. First, Edward was a vampire. Second, there was a part of him, and I didn't know how dominant that part might be, that thirsted for my blood. And third, I was unconditionally and irrevocably in love with him."

As romance fans know, love needs obstacles to hold our interest, and in this egalitarian age, obstacles are hard to come by.

The Oscar-winning Ghost of several years back had one lover living, the other deceased, and Twilight's notion that he's undead and she's not is just as good, maybe better.

Connecting this to the extreme emotions of the young teenage world, in which every moment is a crisis and the chaste romance of passionate soul mates is more attractive than dubious sexual shenanigans, was the masterstroke that created a phenomenon.

It's very much to the credit of director Catherine Hardwicke and screenwriter Melissa Rosenberg that Twilight the movie really gets this.

This film succeeds, likely unreservedly for teenagers and in a classic guilty pleasure kind of way for adults, because it treats high-school emotions with unwavering, uncompromising seriousness.

Much as you may not want to, you have to acknowledge what's been accomplished here.

For openers, neither Laurence Olivier attempting Shakespeare nor Konstantin Stanislavski tackling Chekhov approached their material with the degree of reverence that Hardwicke brings to Twilight.

A director whose entire career (Thirteen, Lords of Dogtown, even The Nativity Story) has been built on the veneration of young adults, Hardwicke has connected so intensely to the Meyer novel that it's hard to imagine anyone else making a better version.

Hardwicke also was instrumental in casting Kristen Stewart and Robert Pattinson as the star-crossed Bella and Edward, and those choices were excellent, not only because they're skilled performers but because they, too, threw themselves into their parts as if they were Greta Garbo and Robert Taylor doing Camille for George Cukor.

Stewart made an impression as Emile Hirsch's wannabe girlfriend in Sean Penn's Into The Wild because, Hardwicke has said, "I felt her yearning - it was just palpable," and it is that quality that sets the tone for the entire film.

When Twilight opens, 17-year-old Bella, likely the palest girl in all of Phoenix, is moving to tiny Forks, Washington, an area (shot with a brooding beauty by Elliot Davis) that gets more rain than any other place in the country.

She's going to live with her dad, Charlie (Billy Burke), the local chief of police, while her mother makes a new life with a new husband. Even before the plot kicks in, Bella demonstrates the film's key attitude: As a teenager, she is, by definition, a deeply superior being, elevated far above the dross of the rest of life.

When she thinks about her pathetic, clueless parents, should she think about them at all, it is with benign condescension.

Forks High School holds no charms for this elevated creature, until she sees the glamorous, self-confident Cullens, the four foster children of the town doctor.

"They kind of keep to themselves," Bella is advised, but one smoldering exchange of looks with dishy Edward lets us know all that is about to end. But not at once.

Edward bolts when he has to sit next to Bella in biology, stays away from school for a few days and then acts so friendly that Bella tells him "your mood swings are giving me whiplash".

What gives? As Bella ever so slowly finds out, Edward is acting the way he does because he is a vampire who is so powerfully attracted to her it scares him.

"Your scent," he tells her in one of the franchise's signature lines, "is like a drug to me".

Aside from self-control issues, which make even kissing dangerous, Edward is pretty much the ideal boyfriend, both super-sensitive and super-strong, capable of flying Bella through the air at a moment's notice.

But don't think for a minute these two don't have their problems.

Jacob (Taylor Lautner), a hunky member of the local Quileute tribe, has doubts about the relationship, the rest of the Cullens are dubious as well, and some nasty old-school vampires just happen to be lurking in the neighborhood, hungry for a tasty snack.

Though Hardwicke gamely ups the film's action quotient to appeal to those random males who might think of showing up, Twilight is unabashedly a romance. All the story's inherent silliness aside, it is intent on conveying the magic of meeting that one special person you've been waiting for.

Maybe it is possible to be 13 and female for a few hours after all.