When boys break up 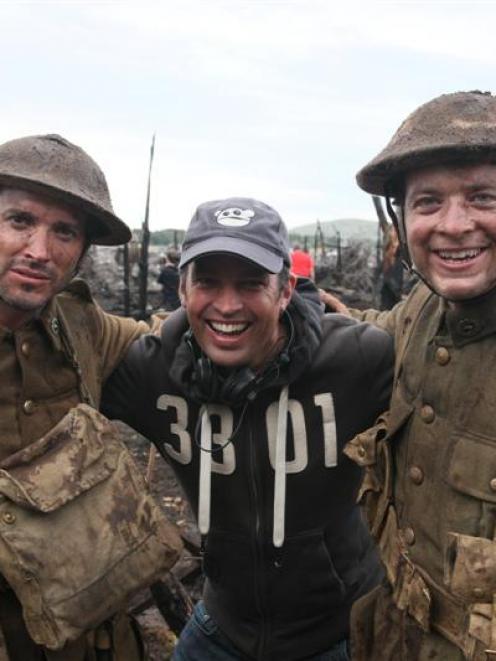 It was January in the Catlins and meant to be summer. But Robert and Duncan Sarkies were faced with wind and rain.

Then the local Lions showed up. 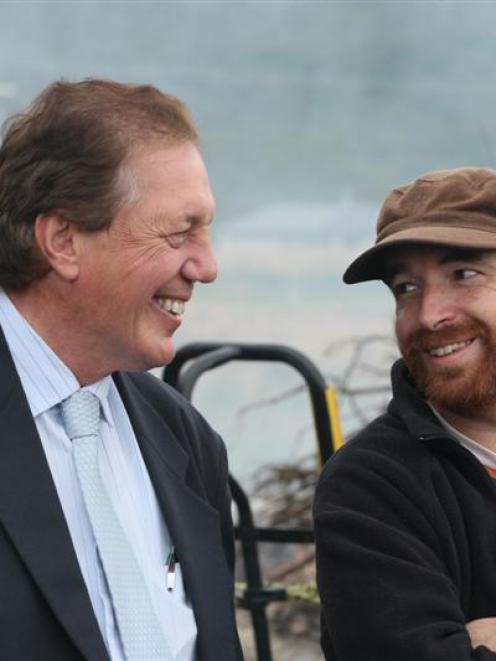 Robert Sarkie and Tim Shadbolt.
Unable to pay for helicopters to take their film-making gear to Cathedral Caves, the brothers had called for reinforcements.

Robert thought they were hiring a rugby club. Even a Lions club seemed a good idea at first.

"But I realised when they turned up that they were all quite old. So I felt really bad," he says, chuckling down the telephone line from Wellington as he remembers feeling he should carry the heaviest gear through the bush and on to the beach.

He needn't have worried. The Owaka Lions Club members - average age about 60 - loved their experience on the set of the black comedy Two Little Boys, and can't wait to see the film when it opens in cinemas on Thursday.

Shooting in more than 50 locations in 36 days was ambitious, particularly as they were often remote settings on beaches and cliff tops and the weather conspired against them, Robert says. "We basically learnt to be flexible, which is quite a feat when you're dragging around 10 trucks and an 80-person film crew."

But mentally accessing the locations was easier, the former Dunedin brothers drawing on memories of school camps and childhood holidays at places such as Tautuku.

In the same way he was conscious of ensuring Aramoana looked poetically beautiful in his feature film Out of the Blue, Robert Sarkies says he wanted to make something of the Catlins visually in the film - sometimes to offset the "less beautiful antics" of the leads as they ran around the place trying to dump a body.

Based on Duncan Sarkies' 2008 novel, the film stars Flight of the Conchords' Bret McKenzie, and Hamish Blake, from comedy duo Hamish and Andy, as Invercargill bogans and estranged friends Nige and Deano. Already past its "best by" date, the pair's intense relationship has been put under further strain by the arrival of Gav, played by Dunedin actor Maaka Pohatu.

When Nige accidentally runs over a backpacker, it forces him to reconnect with Deano, from whom he desperately wants to escape, Robert explains.

"It's called Two Little Boys and it's a lot about arrested development. These are 10-year-olds in the bodies of 20-something-year-olds and the journey of the film, particularly for the Bret McKenzie character, is a journey towards growing up ..."

The funny but unusual story called on the director to chart a path through broad comedy, absurdism and "relationship break-up stuff, with wildlife".

"It's like attempting to take an audience on a roller coaster where they can't see what's in front of them," he says, adding that, despite the wild ride, the characters and their relationship needed to feel real.

Applying the rules of a relationship to a friendship and therefore having an exclusive friendship was an idea ripe with comedic potential, Duncan says.

But the idea of loyalty between mates was based on reality, as some men were more attached to their friends than their romantic partners.

"I've seen a lot of friendships that appear to be a bit too close for comfort.

"And it's such a New Zealand ideal, this concept of mateship that you see in beer ads and Barry Crump novels."

Such observations were unfortunately not the only experiences he could call on. When his girlfriend broke up with him, he "channelled" some of his emotions into the writing process. And the story is set in the early 1990s when he was not exactly a bogan but did wear a mullet and tasteless patterned jerseys.

The brothers started writing the screenplay before Duncan had finished the final draft of his novel, and each form influenced the other.

Robert says it is no coincidence that any time he has made a film, he has come to the Dunedin area to do it.

"When you leave a place it becomes exotic, especially if you grew up there ...

Two Little Boys would also have been partially set in Dunedin if it were not for the financial support of several organisations in Invercargill.

Most of the funding was provided by the New Zealand Film Commission but the pair struggled to pull together the extra, relatively small amount they needed to make the film happen.

"It's not like anyone [in Dunedin] was unfriendly. There was just a practical reality of the city doesn't have much money because it was building, and is now desperately paying for, a stadium. It's the sport versus art debate, isn't it?

""It's a nice stadium though," Duncan pipes up. "And I do think Dunedin is very capable of courting film to it.""Maybe turn [the stadium] into a giant film studio for Peter Jackson's next [movie]," he offers with a laugh.

"See if we can get James Cameron to shoot Avatar [there].

In reality, film-making here is not so much an industry as "little groups of creative people working together trying to build stories", then attempting to find funding, says Robert, who once saved his school lunch money to put towards his early films.

"It's actually a bit of a miracle that anything gets made in this country and I'm delighted that we have and that we're about to bring these crazy characters into the New Zealand consciousness."

How overseas audiences will react to a film Duncan Sarkies describes as a "Darwinist-Penthouse forum influenced-stoner-crime-romantic-thriller-comedy" remains to be seen.

But the creators of the New Zealand box-office hit Scarfies say cult success for their latest film would suit them just fine.

"We've done a story that's not Hollywood pap. It's very much a New Zealand film and [we're] proud of the fact."

The Dunedin Sound championed by Flying Nun Records in the 1980s showed there is no point in New Zealand copying an American blueprint and doing a pale imitation, Duncan adds.

"A film like ours has a far better chance of succeeding internationally if it goes for it and makes its own, bold statement."

The Sarkies' next project could revolve around Duncan's new novel, which will be published in New Zealand and the United Kingdom next year. Brother Robert feels The Demolition of the Century would make a "terrific" film.

"It's partially inspired by the actual demolition of the Century movie theatre in Dunedin, but that's more a metaphor, to be honest," Duncan says.

"It's a really large story that I've already shared with some readers and there's been a lot of excitement about it."

The Otago Daily Times has two copies of Two Little Boys, the novel, together with two double passes to the film to give away. To enter the draw, you need to answer this question: where does Duncan Sarkies think James Cameron should shoot his next Avatar film.
Write your answer, with your name, address and daytime phone number, on the back of an envelope and send it to ODT Editorial Features, Response Bag 500012 Dunedin, or email playtime@odt.co.nz with Two Little Boys in the subject line, to arrive before Thursday.