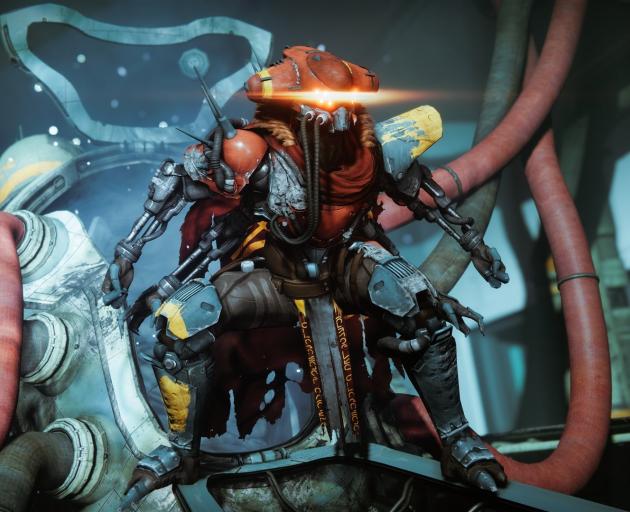 PHOTO: SUPPLIED
After getting his hands on its latest major expansion, Destiny addict Ben Allan checks in on the state of the game franchise, still rolling on in its seventh year.

Look, I need to be upfront about something: I love Destiny. I get why it doesn’t work for everyone, but as with a lot of the dedicated fans of the space shooter, something about its goofily-dancing, heavily-armed space wizards and epic tale of Light vs Darkness has properly connected with me. So spoiler alert: I’m going to recommend you check it out in its current state at the end of this. But while I can’t be totally objective about it, I have been there through all the ups and downs of this ever-evolving game, so I’m in a pretty good position to give you the state of play. And good news: things are on an upswing.

If you’re a complete Destiny neophyte, the game, now in its second iteration, is a massively multiplayer first person shooter. It’s set in the far future after humanity entered into a golden age of prosperity and space colonisation ushered in by the arrival of a benevolent alien entity called The Traveller, and then was plunged to near-extinction when The Traveller’s many enemies caught up to it and wrecked everything. Players take the role of Guardians, (mostly) immortal warriors brought back to life by and lent some of The Traveller’s powers, and then tasked with looking out for the remnants of humanity across Earth’s solar system — mostly by shooting things. A "live service" game, Destiny is constantly on the move in terms of story, activities, and new loot for your Guardian to strive for.

November last year gave us Beyond Light, the game’s latest major expansion, with a couple of major selling points to go with it: a brand new planet (OK, moon), Europa, to explore, and the arrival of a whole new suite of powers for players, based on tapping into the magic of the game’s big ethereal bad guys/force/thing, the Darkness.

Europa itself has a basic "frozen wastes" aesthetic, and offers a couple of new wrinkles for the game; weather effects, in the form of intermittent snowstorms, and a campaign storyline that starts to blur the lines between your good-guy Guardians and the bad-guy aliens in interesting ways. With nearly seven years behind it now, the story of Destiny is sprawling, and it’s hard to imagine anyone coming in fresh won’t be confused at some points by the sheer number of proper nouns being thrown around, but even with all the complications the expansion tells a fairly self-contained little story.

The icy landscapes of Europa and ruined towers are impressive in a "big white vista" way, but it’s the buried ruins you’ll explore on the moon, in which a notorious scientist was up to some unscrupulous experiments, that offer the coolest level designs and sights.

The new power of the Darkness, Stasis, essentially amounts to "ice magic", and is much more customisable than the game’s pre-existing light powers, with more of a skill tree selection to play with. It’s also so effective and fun that no-one is much bothering with anything else. Freezing enemies into solid blocks and then shattering them across the landscape is yet to get old.

There’s good news, too, for people who want to try the game out, because after years of it having an infamously confusing new player experience, Beyond Light has brought in an introductory campaign specifically designed to guide new players into the game. This takes place in the Cosmodrome, a ruined space programme area on Earth that’s been brought back from the first game, and does a good job of introducing newbies to the world, game loop, and basic history.

Beyond the base game and expansions, Destiny has a paid seasonal content model, which brings in new game activities and storylines every four months or so, and which developers Bungie are now using to drive the game’s story along. The first post-Beyond Light season, Season of the Hunt, was not a great one for gameplay, but introduced some important story elements, and those are now paying off in the current Season of the Chosen, which is a real banger. The new Battlegrounds activity is chaotic fun, notable for the sheer amount of enemies it throws at you, and special mission The Presage is a spooky exploration of a haunted ship that shows the game can do more than just gunfights. The story moves along every week, and in response to player concerns about "Fomo", seasonal activities can now be accessed even after their season dates end. It makes the game feel busy and alive.

Is there anything to complain about? Always. Beyond Light came with the removal of a lot of the game’s pre-existing content as four planets and everything on them were literally disappeared from the solar system, part of a move to keep the game at a manageable size. That’s a lot of content gone — but there’s still plenty there, and if you’re coming in new, you won’t miss it.

The game’s upper-echelon PvP mode Trials of Osiris is also in a right old state, with players in it recently jumping off cliffs en masse to throw matches just to get loot, and was shut down entirely last weekend after a large, organised and mind-boggling online player operation to trade wins was uncovered. But Bungie have promised changes are on the way.

So yes there are nitpicks, but there’s probably never been a better time to jump in. If you’re on X Box’s Game Pass service, Destiny 2 and Beyond Light (as well as the game’s two previous major expansions) are both available, so you can take a look — and dive into a huuuuuge amount of content — without shelling out any cash. And with Bungie expanding and committing to more Destiny content for years into the future, if you become as hooked as me, you could have a lot to look forward to.