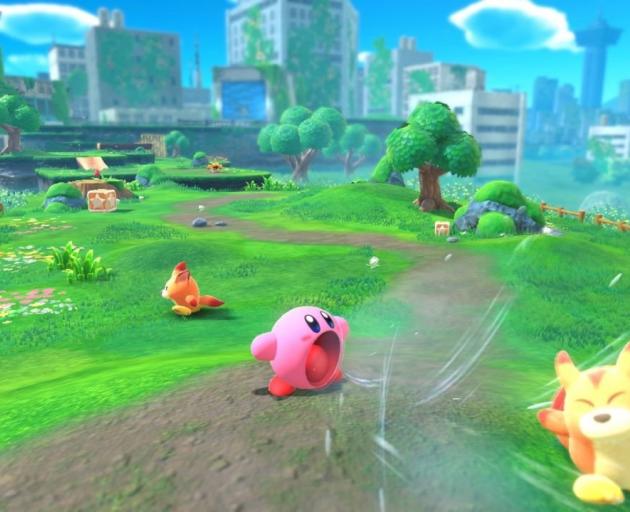 Kirby’s journey through the colourful Forgotten Land isn’t quite enough to hook in experienced gamers. IMAGE: SUPPLIED
KIRBY AND THE FORGOTTEN LAND

Explore the Forgotten Land, rescue the Waddle Dees and save the day.

It’s a simple premise. But sorry Kirby, I just don’t feel like it.

When I first started playing Kirby and the Forgotten Land, I felt like I had been taken back to the era of the original PlayStation.

But this nostalgic feeling cannot carry Kirby to success.

The game is repetitive and very easy, which makes for an overall boring experience.

There is plenty the game has going for it, but as a package it failed to really capture my interest.

The strongest aspect of Kirby and the Forgotten Land is its design.

When you find a Waddle Dee, one of the little yellow squishy villagers you need to rescue, Kirby darts up the screen in a happy victory pose and disappears in one fluid motion.

It feels punchy, like the game never wants to drop the rhythm.

The same can be said for other elements of the gameplay, such as when you copy an ability or activate Kirby’s new mouthful mode. There is a fun little animation that never overstays its welcome, and you’re back to playing before you know it.

Visually, Kirby as a little smooth pink ball makes for a pretty contrast to the green and blue backgrounds of the overgrown world you explore.

It makes for a fun little romp, but I never feel like playing more than one or two levels at a time.

That is the fault of the gameplay.

The core loop of the game is simple. Start the level, complete option objectives to rescue as many Waddle Dees as possible, and end the level in some form of mildly interesting way, often using mouthful mode.

This mode requires Kirby to suck, suck, suck until he stretches his mouth around a large manmade object, such as a car, a cone, or a set of stairs.

At first these can be a lot of fun, but most only have one gimmick which becomes stale, such as the cone which flips upside down to spike the ground.

The same can be said about the copy abilities.

There are a range to pick from and swap between, but they rarely feel much different from each other.

However, upgrades can help differentiate between them and make them feel more satisfying to use.

There are two game modes, normal and ‘‘wild’’ mode, which is meant to be a hard difficulty.

However, having exclusively played on wild mode, I do not understand how things could be much easier.

I’m not asking for an intellectual challenge or to have to produce grand displays of skill, but I felt a complete lack of any form of challenge.

This game reminded me of those Playstation games of old, but those games had a frustrating drive to them. Failure was a reasonable possibility.

In the Forgotten Land, I do not know what happens when Kirby runs out of health, because it has not happened yet.

This is partially off-set by time challenges found spread around the overworld map. Here you need to skillfully utilise each of Kirby’s copy abilities to complete a time trial for a reward. They are interesting, but lack the fun design of the actual levels.

As an icon of Nintendo I expected Kirby to transcend generational boundaries, like Mario or The Legend of Zelda, but I cannot help but feel like this one is mainly for the kids.

It feels like the kind of game that would be great to play co-op alongside a younger family member, or as a relaxing way to spend time with a significant other, but lacks appeal as a single player game for experienced players.