Making a name in Dr Who game 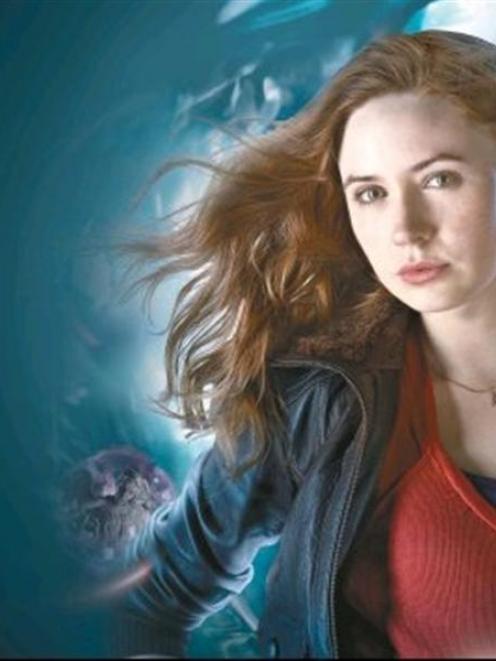 Forget, if you will, the time-bending qualities of the Tardis. Karen Gillan, the female offsider in the 11th Doctor Who series, has been enjoying more traditional modes of transport of late.

Specifically, she is on a tour bus somewhere outside Salford, near Manchester, at 10pm (her time - it's the morning here), explaining some of the unexpected spin-offs that come with landing a role in a television science fiction series that has run, off and on, since 1963: the attention from legions of fans makes her feel like a rock star, though she is quick to add she hasn't been acting like one.

In fact, she puts herself to bed early, eats in moderation ("though I'm no health freak or anything") and does many of her own stunts in her role as Amy Pond, who first meets the new Doctor Who (played by Matt Smith) when he crashes the Tardis into the 6-year-old orphan's garden.

In the first episode of the new series of Doctor Who, which screens on Prime at 7.30pm on Sunday, the young Amy feeds the doctor while informing him of a crack in her bedroom wall and a mysterious voice that mentions a "Prisoner Zero".

Investigating the crack, the Doctor unknowingly lets out Prisoner Zero before heading off to fix the Tardis, promising to be back in a few minutes.

Realising Prisoner Zero is hiding in Amy's house, he breaks in to try to warn her, only to be knocked out by a policewoman - Amy - who tells him he has returned not five minutes but 12 years later.

With just 20 minutes to save the world before it is destroyed by Prisoner Zero's guards, the Doctor and Amy try to track the alien, who takes on the form of patients in comas.

As for the rest, you'll just have to watch, lest the plot be spoilt, though it is safe to say that when the Doctor returns a second time (two years into the future), it is the eve of Amy's wedding.

However, she throws caution to the wind and goes anyway.

Still, the decision to forgo the amorous and run with adventure provides a good window into the psyche of Amy.

It's a trait Gillan, a Scottish actor who has secured more than a few decent acting jobs despite having only recently celebrated her 21st birthday, can relate to.

Gillan grew up in Inverness, in the northwest of Scotland, and developed a love for acting early on, attending several youth theatre groups and taking part in a wide range of productions at her school.

At the age of 17, she secured a place at the prestigious Italia Conti academy in London.

During her first year she landed a role in the crime series Rebus and soon appeared in a variety of programmes including Channel 4's Stacked and The Kevin Bishop Show.

She also stars in the film Outcast (with James Nesbitt), which had its premiere at last month's SXSW festival in the United States.

"Doctor Who is a show like no other in terms of interest and criticism. Because it is such an institution in the United Kingdom, people feel so passionately about it.

"The fans feel really protective about it. It feels daunting ... but I quite like that.

"The bar has been set so high. It is a challenge to live up to that and make the part your own."

Gillan actually had some previous experience of the world(s) of Doctor Who.

In one episode in the last series, she appeared as a soothsayer.

"It was a funny one auditioning for this, because I didn't even know who the character was.

"That's when I learned who Amy was."

She says there is a sense of shared adventure in the fact Smith, the actor in charge of fleshing out the new Doctor, is also new to the role.

"We were just talking about this earlier actually," she explains as the phone she is on threatens to cut out completely in some communications black hole.

"It is so good to have someone to share this experience with. It makes it so much more fun. We understand what each other is going through.

"What is so important about Doctor Who is the relationship between the Doctor and his companion.

"She drives him up the wall quite a lot. I think they have a really deep connection with each other, but it's not a romantic one.

"It's a really strong bond. But they are both mental. They share this lust for adventure."

• The new series of Doctor Who premieres on Sunday at 7.30pm on Prime.