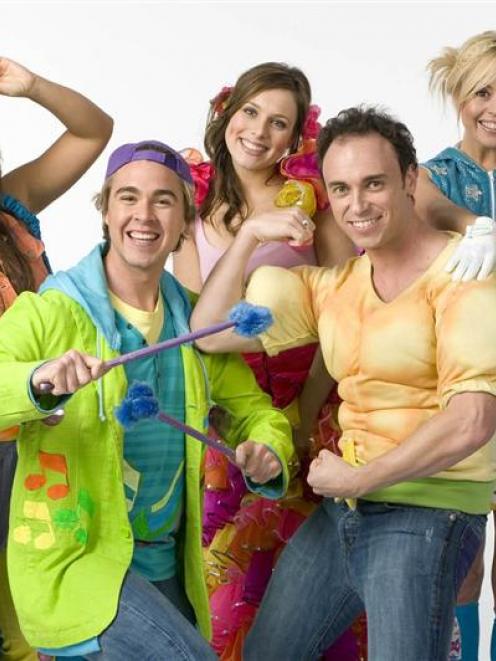 Cast members are (from left): Sun Park, Stevie Nicholson, Casey Burgess, Nathan Foley and Kellie Crawford.
If you can't sing the opening lines of their signature tune, "Five in the air: let's do it together. Five to the side: who cares about the weather?" then chances are, you don't have young children in your household. Hi-5 are rock stars among preschoolers and heading this way. Kim Dungey talks to original cast member Nathan Foley.

The man whose smile has lit up the Hi-5 stage for a decade says he has bad days like anyone, but switches on when the cameras roll.

Nathan Foley is one of five fresh-faced role models, whose catchy pop tunes and dance routines are designed to keep pre-schoolers on their feet and off the couch.

Speaking from Sydney before Hi-5's New Zealand tour, he says some days he feels tired.

"But as long as you're eating, not abusing your body and having eight hours of sleep every night, you just switch on, like anybody who goes to work . . ."

If any of the Hi-5 cast is having an off day, their pint-sized fans would never know it. The entire cast seems constantly happy.

And unlike other entertainers, they have managed to avoid controversy. The worst we found on the Internet was Foley and co-star Kellie Crawford calling off their engagement in 2006 (his present girlfriend is photographer Melissa Stone) and Charli Delaney sporting a funky haircut after retiring from the group at age 27 (Delaney told a women's magazine she wanted to prove herself as an actress for an adult audience and needed to "de-Hi-5" herself).

Foley, one of two original members left in the line-up, says there is potential to be typecast but sceptics will hopefully change their minds when they see him perform solo.

Away from Hi-5, the 28-year-old writes his own songs, sings pop and rock and roll, and loves American muscle cars, corvettes, mustangs and motorbikes..

He entered his first talent quest at the age of 9, and was 18 when he auditioned with 250 others for a new television show created by Helena Harris, the brains behind Bananas in Pyjamas.

Wildly popular with 2- to 8-year-olds, Hi-5 now airs in more than 80 countries and has generated a range of merchandise, from DVDs to clothing.

Foley says he has saved enough for a deposit on a house, but the perception that because he is on television, he is rich is not correct. "I don't own the show so I'm no millionaire."


He also has no privacy, but is not complaining. "This is the industry I chose and that's part and parcel of it.

"I've met some wonderful people and kids, and been to amazing places around the world . . . It's a fantastic show to be part of."

Though he has toured New Zealand 10 times, he thinks he has been to Dunedin only once.

"We probably flashed in one night, did a show and left for the next city. I can't remember yesterday, to tell the truth."

However, he is sure that New Zealand children attending the shows are very much like those in Australia. "They're there to have a good time, jump up and down, and get into it."

Being a role model for children is great, he adds.

"A lot of kids are listening to [American rapper] Eminem and watching action and violence films. We don't want to be old-fashioned but we do want to have a positive message . . . And having a strong educational basis to the show is important."

Foley regularly presents the "Shapes in Space" segment, exploring shape, space, colour and pattern, but in the circus act, gets to be a strongman. The show also features juggling, tumbling and a flying trapeze.

"It has a bit more of a wow factor," he says. "In the beginning, we just did song and dance. This one is more theatrical; there's something for parents and kids."

• Don't miss it: The Hi-5 Circus plays in Dunedin's Regent Theatre on September 29.