On the floor: Band on the money 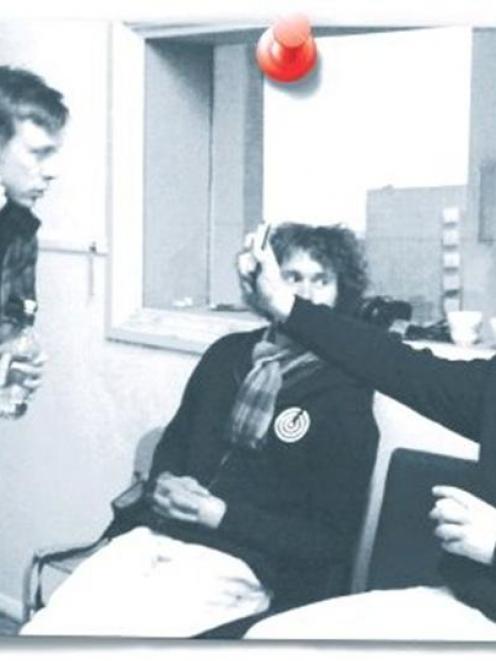 Tonnon (left) and his Finance Company collaborators.
Dunedin's Tono and the Finance Company haven't ever been mistaken for an actual lending agency, much to the relief of the band's frontman, Anthonie Tonnon.

"Not quite, but I do think that a lot of our emails end up in people's spam filters. And we did leave ourselves wide open to the same jokes: 'have you gone under yet? ... '"

The recession kind of annoyed me, because we pre-dated the recession, and we didn't mean to have such a topical name. We chose the name in the days when every second TV ad was trying to offer you finance ... and I thought it was ridiculous. We predicted the recession."

The band is playing a handful of dates around New Zealand, although Tonnon hangs back from calling it a tour.

"No official tour as such, but we're playing Auckland and Christchurch shows in November and December. We'll take the EP on tour when it comes out early next year. We're playing some shows because we have ants in our pants and we'll all be in different places over the summer."

Tonnon says the band is tight.

"We're at a point where we understand each other and it all works easily. The last EP was originally a solo project, so I directed Andy and Bugs a lot, and I wrote the backing vocals and a lot of the extra parts. We've been playing so long now that I don't have to tell them anything, and they figure out something better than I could imagine myself. The new songs have a more raw, guitar-driven feel that has developed from the chemistry on stage.

"It almost feels like grunge, but that's not the right word. We've become more rhythmic, and more relaxed about how much instrumentation we need. The backing vocals now develop from improvisation."

Tonnon says he is excited about the venue.

"The upstairs bar has a great environment with excellent sound and plenty of space. It's nice to be playing in the same place the Clean and the Verlaines were playing in 20 years ago."

• Catch them
Tono and the Finance Company play at The Cook tonight.