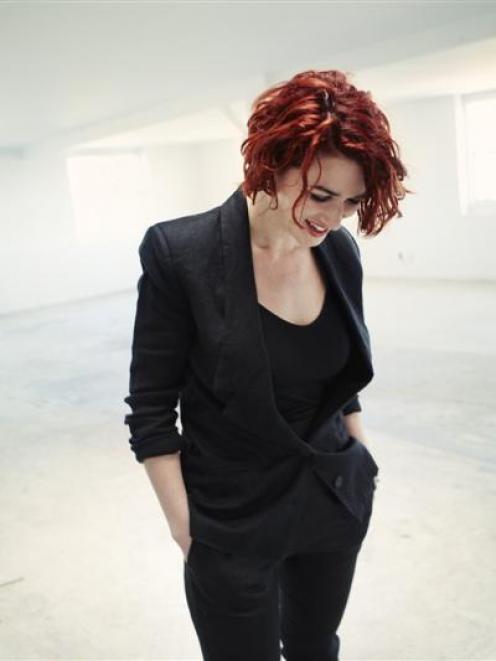 Julia Deans: "We love Chicks - both my band and Fur Patrol love it." Photo supplied.
Julia Deans is on the road again. Her tour started last night in Timaru, and she plays at Chicks tonight. She is performing songs from her debut solo album, Modern Fables, in shows throughout NZ.

Deans is bringing a drummer and bass player with her, Richie Pickard and Redford Grenell, although she promises some people will see her play solo.

She is a frequent visitor to Dunedin. "I love touring, and I always feel disappointed when I get to the end of a run.

"I love the bonds you form with the crew you're touring with; I love meeting new people in each town; I love performing; the actual travelling gets a bit tedious, but it's about the only time I usually get to read so even that has its up side."

"I often come up with ideas and bits'n'pieces when on the road, but I tend to need somewhere a bit more stable and private to really finish things. I tend to get a bit shy and anxious if I think people can hear me. Although sometimes you feel ... you're just some conduit for this little notion that really needs to burst out of the ether and into the world."

She's keen to return to Chicks, as she has fond memories.

"We love Chicks - both my band and Fur Patrol love it! There's just that great vibe. ... It has a sense of history, it's cosy without inducing claustrophobia, and the people ... are warm and welcoming and rich in character."

> See her
Julia Deans plays at Chicks in Port Chalmers tonight before heading north to The Penguin Club in Oamaru on Thursday.


• Chris Matthews, of the recently reformed band Children's Hour, will be playing at the Cook on Friday, November 26, with Rob Mayes and Brett and Heath from Squirm as Robot Monkey Orchestra.

> See them
Chris Matthews plays with Robot Monkey Orchestra at The Cook on Friday with Squirm and Death By Silo.

He is joined on tour by a vocal quartet, a female beatboxer and dancer Cat Ruka. The show also features an original backdrop by painter Nigel Brown. The show starts at 8pm.