Leaving notes for others 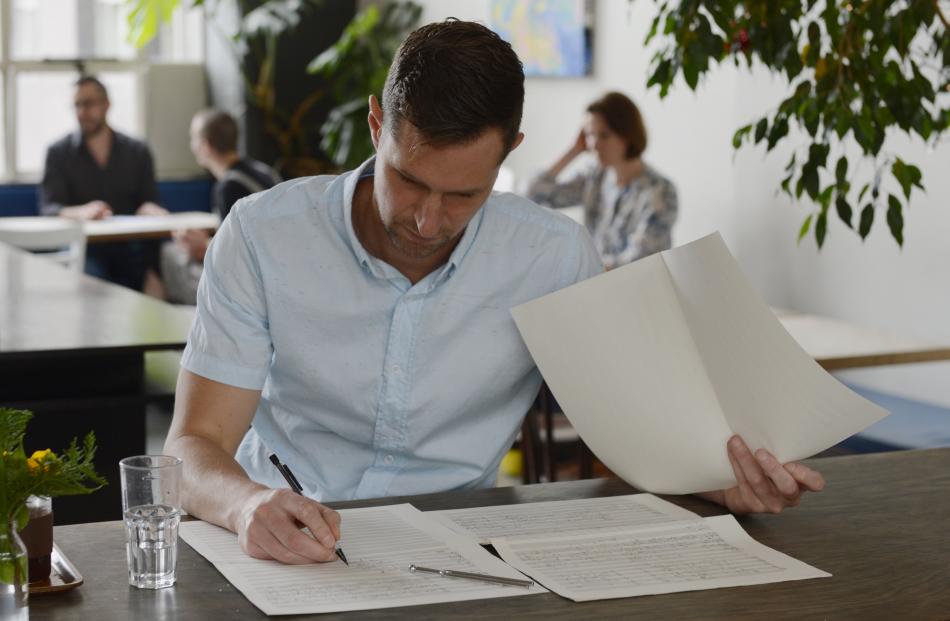 Mozart Fellow Chris Gendall prefers the noise of a busy cafe to silence when composing. Photo by Gerard O'Brien. 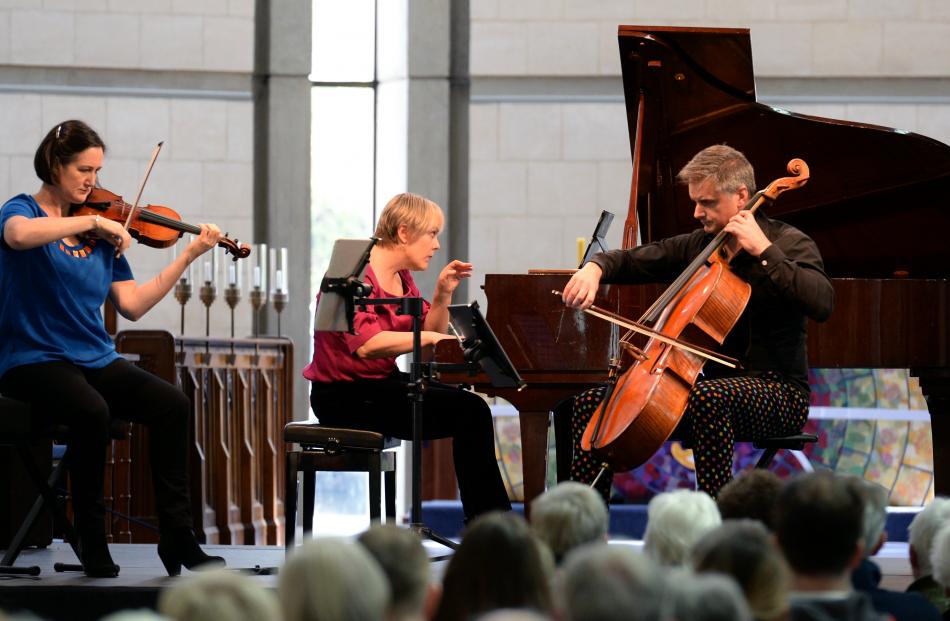 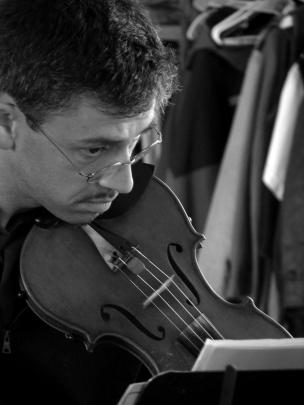 Composers might be invisible but hearing musicans play their work can make it all worthwhile, 2016-17 University of Otago Mozart Fellow Chris Gendall tells Rebecca Fox.

Chris Gendall relishes the challenge to be creative and different whether it is for violin, flute, percussion or cello.

''I'm not really sure I do things that are conventional any more,'' he says.

Which has made being appointed to the University of Otago's Mozart Fellowship for a second year even more significant for him as it provides office space and a salary.

''I guess I get to sink my feet in a little bit more and I'm pleased about that.

''It's nice to have time to mull things over and it's meant I've been able to take on projects that I'm not being paid for, which when you are freelance get pushed to the side.''

He started his first fellowship year with a plan to complete three works and had accomplished that, with a couple of surprises thrown in.

A request for some orchestrations from a chamber opera he had written some years ago were performed in Vietnam and will also be performed by the New Zealand Symphony Orchestra.

Then a film-maker and choreographer approached him about using a piece of his electronic music in a short dance film.

''It looks incredibly beautiful. It was a nice experience, a kind of surprise.''

During the year, he had written a concerto for New Zealand violinist Prof Mark Menzies, who returned from the United States to work at the University of Canterbury last year.

''That was fun. He's a really explorative player, everything he does is slightly on the outskirts of the violin. He tends to play very old music and very new music.''

Menzies had some ''pretty unique'' abilities, especially with new music, he says.

''In the sounds he can produce and the virtuosity he has available to him, but also the generally poetic way he has of playing and interpreting music which is really nice for both of us. There is real power, drama that happens when someone is so focused.''

So he wrote two movements, which was unusual for a concerto, with the first one exploring the ''wispy cloudy colours'' available to the violin in the high registers especially, while the second movement was inspired by bagpipes.

For his second piece he wrote a solo percussion work for US-based friend Sam Solomon, who asked for a piece that would fit his set-up of instruments.

He chose to write a piece for four drums.

''Basically there is not any conventional strokes in my piece. Most of it sort of swirls or swipes with wire brushes which jazz drummers use.''

The distance between the pair did not affect the project as Solomon had a video set-up from his percussion demonstrations, which meant Gendall was able to send music to him.

''Then he'd do a little demo and talk about issues, with suggestions here and there. We did exploit the technology in order to be able to achieve that.''

His third work was a piece for the NZ Trio, friends of his who were really adventurous about the work they played.

''When you do have a relationship, they're really trusting of you and what you are going to do is really effective. So that it's going to be a good collaboration, which is great. It's really nice when they [musicians] don't interfere with you being creative.''

THE ability to be creative is how Gendall, who grew up in Hamilton, got hooked on composing, though he cannot remember when or how he chose the profession.

''I played piano when I was kid. I was a terrible pianist and an even worse piano student because I was quite good at sight reading but didn't really like practising.''

But out of that ''terrible'' experience came the realisation he could be creative with music and he also developed strong notational skills.

''When I was a teenager I was a voracious listener of all sorts of music. I was lucky to be introduced to the music of the avant-garde and fell in love with the world of possiblities that opened up ... [that] sound could be beautiful in its own right.

''That you could craft these amazing works of art from the sounds of people and instruments and technology.''

However, he does remember people telling him he really had to want to compose as the career came with some hardships.

''A lot people tell you you have to want to do it as it is not very fun and it's not very rewarding. Although making music has incredible results it is really punishing, you don't make a lot of money and there are a lot of disappointments.''

That was like any arts career though, so he went on to study composition at Victoria University before heading to Cornell University in the United States to undertake a doctorate.

He found it interesting that composers were invisible, their identity entirely wrapped up in how their music sounds.

''I never knew what Tchaichovsky looked like until I was 17 or 18 but I had strong impression of who he was, the same with Brahms and everyone whose music you like.

''I guess you really do have to love the creative aspect of it [composing].''

Gendall was the Creative New Zealand/Jack C. Richards Composer in Residence at the New Zealand School of Music for 2010-2011 and his work Wax Lyrical won the 2008 SOUNZ Contemporary Award.

His pieces have been performed in Europe, Asia, and North and South America, by groups such as the New Zealand Symphony Orchestra, Neue Vocalsolisten Stuttgart, Stroma, NZ Trio, the New Juilliard Ensemble and the New Zealand String Quartet.

Gendall sees himself as being lucky in that he has had some really good experiences and ''amazing performers who have done amazing things with what I've written'', but also had good support when those things did not go to plan so he did not give up.

''It didn't break my heart to the point of changing everything,'' he says.

He worries that young composers who push the boat out and find it sinks do not have that support and take the blame all on their shoulders.

''Not all performers, situations are conducive to the music.''

Being at the first rehearsals of his work is one of the real joys of the job, Gendall says.

''First reahearsals are very nerve-racking, especially with new work, as there are so many things that can go in a number of directions.''

However, he liked giving his work to someone and seeing how they interpreted it.

''I want the mechanism to do its thing.''

He likes being at rehearsals for social reasons; it is nice to meet the people playing his music.

''At its best, the most enjoyable aspect of being a musician is rehearsal and making music together.''

Musicians and composers learn so much more from rehearsals than concerts because they hear things go wrong and get to hear the nitty-gritty of what it takes, he said.

''Concerts, when they go well, are magic but rehearsals, they reveal everything really.

''Concerts are the public presentation of that.''

But to get to that point, Gendall spends hours in cafes letting his imagination run wild.

''You have to enjoy your imagination and enjoy what it throws up. I think we all have the ability to let it go to strange, beautiful and crazy places.''

He translates those thoughts using pencil and paper.

''I'm not a fan of silence. I find silence really distracting so I tend to work in noisy places like cafes or if the telly is on.''

Working with music in the background was something he learnt as a student living with others.

''A lot of the process is about focus, so if you can't focus when there is music playing then you'll never be able to focus.''

He also carried a tuning fork with him to give him a reference point and wrote up the full score later.

Using a computer for that part of the process was a distraction: ''they have the internet''.

He was also not a fan of music notation programs, especially their playback mechanism.

''That is disastrous and really horrible. I hate to be writing notes and having them play back to me. I think some people like playback but for me it doesn't work. My imagination is better than that.''

This year, he already has a couple of solo pieces scheduled.

''She is the most talented person I studied with.''

Writing for friends was special although it depended on the piece, he said.

''It's nice to know you don't have limits or the limits are ones you imposed and it's nice to write for friends as it feels like a sharing experience, it's not just a job.''

The fellowship is also giving him time to ''listen'' to music as being a composer in New Zealand he was isolated from ''where a lot of great contemporary music happens''.

''It's good to have time to explore things and really listen.''

He is also enjoying being involved with the university's music department, having contact with its composition students - ''a very talented bunch'' - and hearing the other goings-on with singers and musicians.

''That is something that without the fellowship I'd have never explored.''

It was the same thing with Dunedin.

''I didn't really know what to expect when I came down.''

However, he had discovered a ''really enjoyable place to be, to hang out in'' as well as a city with a lot more activity than he thought for its size.

''I've enjoyed hanging out in nice cafes and am a regular at one bar.''

Dunedin, with its historic buildings and bustling arts scene, had a lot going for it.

''It's charming, has loads of potential.''