In the moments before sleep 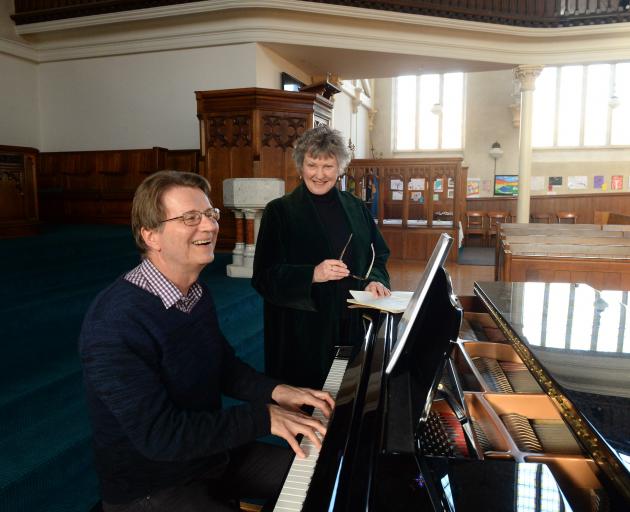 It has been written by a Dunedin poet and composed by a Dunedin composer but Lullabies has never been performed in its home city.

City Choir Dunedin will change that this month with a performance of Lullabies, composed by Anthony Ritchie based on work by poet Elena Poletti, at Dunedin's Knox Church.

The work was written for the Auckland Choral Society's 2015 season, and first performed that June in the Holy Trinity Cathedral, with funding from Creative NZ.

The work has also been performed in Christchurch in the ''transitional'' cardboard cathedral.

The idea was sparked when the Auckland Choral Society approached Ritchie to write a work for organ and choir.

The composer had worked with Poletti on another project, had read her lullabies and thought it would be a good opportunity to collaborate.

''Because we had collaborated before and he had the material already there, it turned out the way it did,'' Poletti says.

Poletti does not know why she started writing lullabies, although she believes New Zealand does not have enough of its own songs for children.

While it still amazes her to have her poetry set to music, she does recognise lyric poetry has that potential.

For Ritchie the lullabies provided an opportunity to write music that included children's voices.

''I thought it was a nice idea and, fortunately, Auckland Choral said it was fine.''

The cycle of six songs is performed without a break and each traverses different perspectives, both adult and child.

One of the lullabies, Beddington, is a frisky song for children to sing, and includes a ''Monster-Munch-Up'' chant.

''You really need children's voices for that one,'' Poletti says.

So Auckland Choral got the St Cuthbert's College Song Squad and Junior Black Watch Singers to take part in their performance.

City Choir member Deirdre Tucker says it is great to have music that enables young children to have the experience of singing at a higher level.

For the Dunedin concert the choirs of St Hilda's Collegiate and Columba College have been brought in to accompany Dunedin soprano Sophie Morris.

''It brings a freshness to the established choir. They have a lovely bell-like quality which us older ladies don't have,'' Tucker says.

Poletti, who has also sung in choirs, agrees.

''Choral singing in Dunedin is so strong it is great they can be part of it in this way.''

All up there will be 140 singers taking part, conducted by the City Choir's musical director David Burchell and accompanied by English organist Tom Chatterton, who is now based in New Zealand.

For Ritchie, Shush-a-shush, about a parent calming her child to sleep through images of the sea and beach, had such onomatopoeic opportunity.

''It's a lovely thing to have as a composer. There is a lot of sound in all the poems really; of waves, penguins, wind, moreporks and treefrogs.''

For Poletti, The Nightsingers was inspired by the sounds she hears from her Northeast Valley home at night; the tree-frogs, ruru (morepork), and cats.

In Little One it is gentle rain that lulls the child to sleep, while Sounds of Penguins makes a comparison between little blue penguins under a house and children busily preparing for bed.

The final song, Hope of my heart, is more reflective, as it muses on a child's future, and remembers the passing of a sister and child.

Ritchie decided to put that song at the end as it is a ''slightly sad song''.

The works are part of a bigger body of work.

Since she wrote the poems, Poletti has moved on to write dark and bleak lullabies.

''Because the whole process of sleep is about the vulnerability of trying to go to sleep.''

The new works are about children thinking through the day as they go to sleep.

For Ritchie, composing Lullabies was very different from his Gallipoli to the Somme work he was doing about the same time.

''Of course the war theme, the epic nature of it. Lullabies is quite intimate, they're personal songs about relationships with the child.''

The music needed to be simplified so it appeared as if looking through the eye of a child. ''It was an interesting angle for me.''

Having the writer of the lullabies alive and nearby also made it an easier project as they were able to adjust and add words where needed to make pieces work, he said.