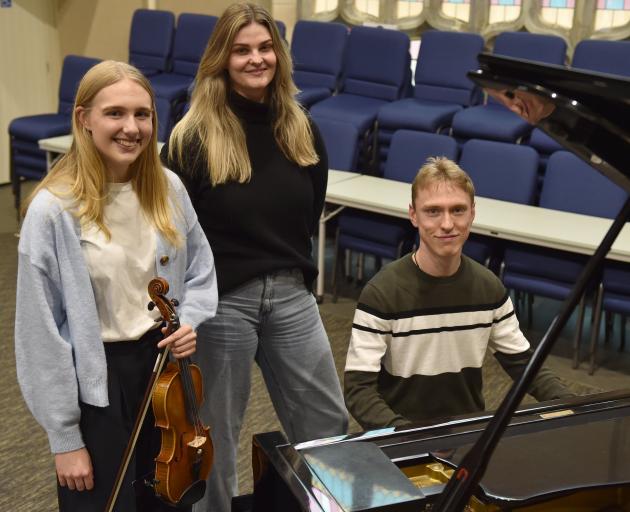 Mozart Monster Mash will be a big moment for soloists, from left, Skyla Murray, Rhiannon Cooper and Cameron Monteath. PHOTO: GREGOR RICHARDSON
Three of Dunedin’s upcoming musical stars will have the rare opportunity to perform solos with the Dunedin Symphony Orchestra at the Dunedin Town Hall in Mozart’s Monster Mash. Rebecca Fox discovers the nerves are tingling.

Walking on to Dunedin’s biggest stage to perform solo with a symphony orchestra is something of a classical musician’s dream.

To do it at the start of your career is something three emerging performers — pianist Cameron Monteath, soprano Rhiannon Cooper and violinist Skyla Murray — are coming to grips with.

They will perform with the Dunedin Symphony Orchestra (DSO) and City Choir Dunedin along with musicians and singers from the community, in DSO’s Mozart’s Monster Mash concert at Dunedin Town Hall.

It will be conducted by Prof Peter Adams, who says the opportunity for the soloists is a "big deal".

"They have good careers ahead of them. To do a concerto with the DSO in the town hall is a big stepping stone for them."

He also knows it will be a "little frightening" for the young performers.

Cooper (29) agrees, saying hearing she had been selected was a little overwhelming but exciting at the same time.

She will be singing "Per pieta, ben mio, perdona" from the opera Cosi fan tutte for the first time, although she has performed pieces from it before.

"I’ve got the character just not the aria — yet."

As a teenager Cooper, who started singing lessons when she was about 13, often felt sick for two or three weeks prior to a big performance, but now she had more control — being fully prepared, helped by "lists", eased the anxiety.

Murray (16), already a member of the DSO, admits to a few nerves, but she is channelling them into practice for her performance of Adagio for violin and orchestra.

"I think I was 5 when I first saw the DSO in concert and now I’ll be playing with the orchestra behind me — the 5-year-old me would be very impressed."

Having friends in the orchestra such as Monteath, whom she also plays with in the National Youth Orchestra (NYO), is also a comfort.

Monteath will play the first movement from Piano Concerto No. 16, saying it does have its challenges but he is very grateful for the opportunity — even "borrowing" a piano to keep up with rehearsals while in Wellington for the NYO, in which he plays the viola.

Getting this opportunity is special to him as he has had some setbacks recently due to an overuse injury, which taught him the importance of listening to his body. Through physiotherapy and restricting practice time he has noticed improvements.

Being able to play Mozart is even more of a bonus as he is a favourite composer of Monteath’s. He chose a less well known piece to play in the Monster Mash and found it to be a joy to learn.

"I’ve been a huge fan from a very young age. Mozart sounds easy but it’s not." 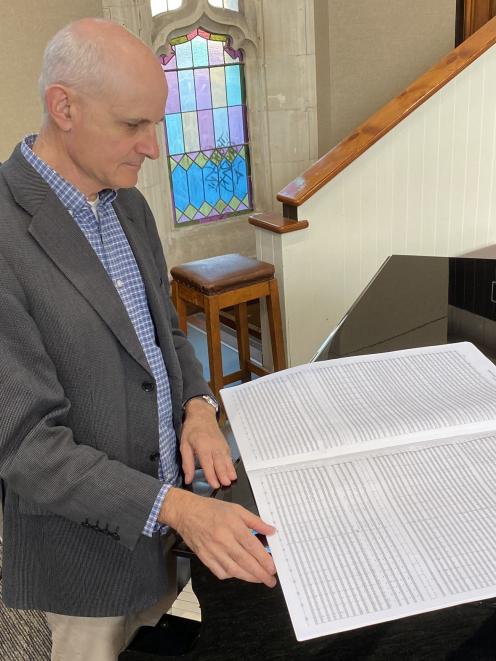 Mozart Monster Mash conductor Peter Adams. PHOTO: BRENDA HARWOOD
Monteath, who is studying music as well as French and German, always wanted to play violin but his parents started him on piano first. He began learning the violin a year later at Saturday morning music classes.

"Piano has always been my first instrument."

He picked up the viola in his teens and auditioned for the youth orchestra. He has continued as it allows him to play in an orchestra, something there are rare opportunities for as a pianist.

He now plays it for the DSO.

Cooper, who moved to Dunedin to continue her vocal studies in 2016, has always been a singer — although she has contemplated giving it up, she knows she can’t. Even taking a few years off after school to work, her enthusiasm has not waned.

"This" is a career singing, and Cooper travels the country taking part in singing competitions, festivals and performances. In the last few weeks alone she has competed in Auckland and Christchurch and performed in the Marlborough Opera festival.

It is a tough circuit and she has had to learn how to cope with the rigours of being judged regularly.

"I’ve got to feel like I’ve put in the work and done the best I could on that day. You have to understand it is not a direct reflection on you."

Like Monteath, she has faced challenges with health issues as well as vocal changes and getting Covid-19, but knows to "cling on to the good bits".

Cooper is now looking to her career — a Circle 100 Scholarship helping fund an overseas audition tour and also considering further study in the United States.

At the other end of the spectrum is Murray (16), who is in year 12 at Columba College and still to make all those important decisions.

She began playing the violin when she was about 4 years old, after hearing another child play Twinkle, Twinkle, Little Star on it at pre-school.

"I begged Dad for lessons. I was so excited and really wanted to play it."

Doubting she would last more than a month her parents gave in, thinking it would help her shyness, but she is still playing.

"I really enjoy it. The violin is always there for you. It can’t talk back, you can put all of your emotion into it. It’s an outlet for your emotions — if you are excited you can play excited music, if you’re sad, sad music. It’s a good space to emotionally connect and let go of emotions."

While admitting the practice can be gruelling, the pay off was performing and sharing music on stage with others.

"That’s a big motivator to practice."

She agrees with Monteath’s take on Mozart being deceptively simple.

"Every single note is important. It’s almost trickier to play, so much emotion is needed to pull it off really well."

The piece of music she will play in the concert was one she had not heard before.

"It’s been a fun piece to explore and quite different to lots of other works for violin.

Also on stage with the three young soloists will be about 75 amateur singers and musicians of all ages and skill levels from the community, who also get the once-a-year opportunity to perform with the orchestra and choir.

Adams says his role will be to encourage and galvanise the musicians to create a cohesive concert. Simpler parts have been written for the less experienced musicians so everyone can enjoy the experience.

"If the musicians are enjoying themselves it is transmitted over to the audience."

Also on the programme is Handel’s "Hallelujah" Chorus from the Messiah.