Moving on from Six60 Castle

Two top-10 singles, an appearance at the Big Day Out, summer festivals on the horizon and the release of its major-label debut album next week ... this year has been a big one for Six60, writes Shane Gilchrist 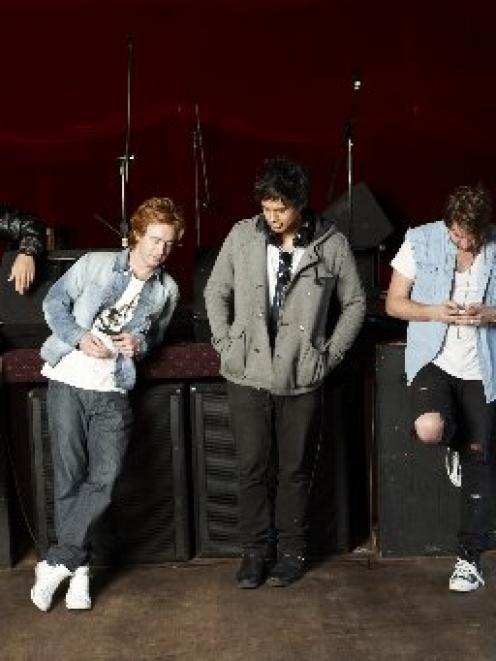 The Auckland-based roots-reggae-rock band, whose members met while at the University of Otago a few years back, is just emerging from the cocoon-like experience of recording its debut album, which will be released on major label Universal on Monday.

Mixed and produced by Tiki Taane, the former Salmonella Dub frontman who has gone on to forge a successful solo career, the album arrives at just the right time for Six60, which has seen its second single, Don't Forget Your Roots, remain in the New Zealand top 40 for 11 weeks (this week it is sitting at No 6).

And let's not forget the band's first single, Rise Up 2.0, which reached number one several weeks after first entering the charts in September 2010.

The combined result of that success is an all-important momentum, on which singer Matiu Walters is keen to build over the next few months as Six60 hits the road for a national tour that includes gigs at Invercargill venue Saints and Sinners on Thursday, October 13, and at the Dunedin Town Hall on Friday, October 14.

The New Zealand tour will be quickly followed by a series of gigs in Australia and, further down the track, a few of those hazy summer music festivals, including Rhythm and Vines (Gisborne) and La De Da (Martinborough).

"It has been a busy year," singer Matiu Walters says via telephone from Auckland. "It's a bit strange at the moment because we are just coming out of studio mode and are looking forward to being a live band again."

"We'd not experienced writing in a controlled environment. I think the music is so much better because of that. The subtleties we've always wanted are there. Also, our songwriting and instrumentation has grown," Walters explains.

"I think we are a lot more in touch with the sound and direction we wanted to take.

There was more of a thought process about this album. For the EP, we were just a bunch of dudes writing what we thought was cool," he says of the group's 2008 self-titled seven-track release, which included Don't Forget Your Roots and Rise Up 2.0.

It was crazy. We just tried to forget about everything and write songs that made us think about something. We've always tried to write songs that have feel. For this album we didn't try to go down a path; we just put down a bunch of stuff.

"We told ourselves to open up and listen to the producer as well as our own judgement."

Although Don't Forget Your Roots and Rise Up 2.0 are included in a bonus disc of material, Six60 was wary of simply repackaging old songs on its new album. Put another way, the group wanted to show how it has grown.

"Those songs are a bit old now, they've done the rounds," Walters says. "We didn't want to tarnish what those songs have achieved by putting them on a new album.

"It is stylistically similar to the EP, but at the same time we are trying to stretch our boundaries. It's a mixture of slow, intimate songs, poppier summery songs and heavier songs similar to Rise Up." Though Taane's role as an engineer and producer was important, more crucial was his supportive approach.

"Obviously, the music he writes is all over the show, too, so we liked him in that regard, but he is also just a cool dude, so we got along with him really well. He is an amazing engineer as well as a producer.

"Tiki also just gave us confidence because previously we'd always been second-guessing ourselves. We did go in with a jam mentality for a few of the songs. We just pressed play and went for it."

THE core of Six60 met in 2005 while residing at Dunedin's Unicol, which resounded to a collection of roots-reggae covers, including New Zealand outfits Katchafire, Kora and Trinity Roots.

From there, the group (whose name is derived from 660 Castle St, a flat in which some of the members lived during their second year of studies) was a popular request at 21sts, house parties and local bars.

"Most of the stuff we've done hasn't really been intentional; it's a result of five different guys putting their influences into the music," Walters reflects.

"I think we all get along and have a similar direction but we come from different backgrounds. I grew up with my parents playing Motown and R&B and James had the Eagles and Jimi Hendrix; other guys listened to punk rock and death metal. Fortunately, it has melded together and not been rubbish."

For its first gig out of Dunedin, at Al's Bar in Christchurch, Six60 was booked for a Thursday night. The venue's management under-staffed the bar. The gig turned out to be a sellout.

A key stage in the band's lifecycle came in early 2009. On the back of the release of its self-titled EP (in December 2008), while playing at the Peak Festival in Queenstown, the group members studied the other bands, took notes and arrived at a decision: to make music a career.

Six60 then enlisted the services of a professional manager and gained support from Campbell Smith, chief executive of the Recording Industry Association of New Zealand and founder of CRS Management (whose clients include Bic Runga).

The result: a production and distribution deal (on an album by album basis) with major label Universal, with the band retaining rights to its music via its own imprint, Massive Entertainment.

"We were fortunate enough to sign a deal for one album at a time," Walters explains.

"It gives you confidence because you know you have some powerhouse support."

Now the band faces a healthy quandary: which song to choose as its next single.

"I have to tell you, it's not that easy," Walter says.

"Hopefully, that means there are so many good ones that it's hard to choose. Everyone has his favourite song. It's difficult choosing between a song that might be the best single and one that might best represent us.

"We are having a debate."

The album, the show

The album, the show Six60's debut self-titled album is released on Monday.