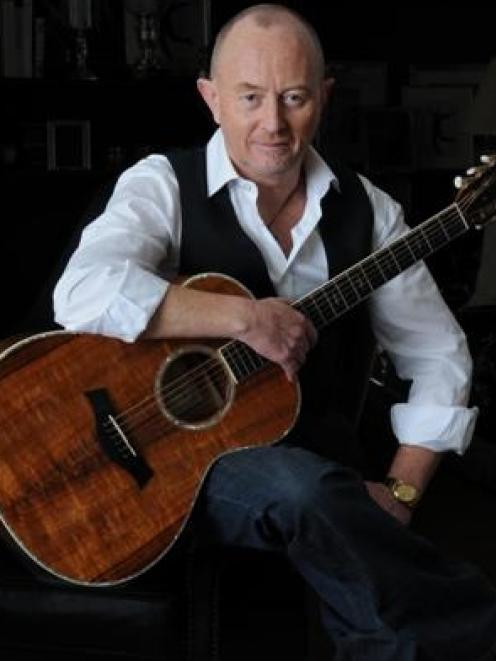 Smack-bang in the middle of Dave Dobbyn's publishing debut, The Songbook, resides a photo that is worth, if not a thousand words, at least a few hundred.

Here, the songwriter of small frame but big songs, hemmed in by speaker stacks and on a stage no bigger than your average kitchen floor, is letting rip in a London club.

Among the audience are some clearly drunk and clearly happy.

Some stand with eyes closed or arms raised, singing, shouting or, in the case of the couple in the middle, having a good old pash.

Many are wearing identification standard to the young New Zealander abroad: T-shirts bear Maori motifs, the North and South Island or outlines of our national bird; oh, and is that a rugby shirt?

Fashion aside, the 300 or so souls are also linked in the embrace of the sing-along.

Far from home, they are transported back nonetheless.

Dobbyn is good at this, has been for some time.

Since 1976, when he was invited to join some of his Sacred Heart College mates in a band called Th' Dudes, he has moved us by way of his heart-on-the-sleeve love songs (Loyal, Beside You, Language, Devil You Know, Whaling), his state-of-the-nation addresses (Welcome Home, Outlook for Thursday), his celebration of place (Lap Of The Gods, Shaky Isles), even his youthful crowing (Be Mine Tonight).

Like the best of his music, the 53-year-old (he celebrated his latest birthday on January 3) endures.

A key reason for this is Dobbyn still enjoys honing his craft, the process of curling lyrics around the framework of chords and then watching to see if an audience will breathe further life into them, perhaps translating his words and melodies into their own private worlds.

How do I know this?

He told me so.

A few weeks back, Dobbyn was in Central Otago on a rapid-fire series of appearances to promote the release of his debut book, The Songbook, in which he describes the inspiration behind 39 of his tunes.

Published in conjunction with Beside You, a retrospective CD and DVD package, The Songbook took a year to produce.

There was plenty to explain, Dobbyn says as he waits for a coffee (trim flat white, by the way) at Alexandra's Shaky Bridge Cafe, where more than a few mid-morning diners look up, spot the diminutive figure in black leather jacket, with his close-cropped hair and elf-like ears, and mouth the invariable, "is that . . . ?"

Dobbyn, strategically tucked around a corner, seems unaware of the curious stares, but later acknowledges approaches from one and all, posing for photos and signing a few autographs to a common conversational refrain:

Dobbyn is keen to make it clear the release of The Songbook and the Beside You collection should not be regarded as a full-stop to a career that has spanned more than three decades, featured multi-platinum sales, more awards for songwriting than any other New Zealander, the bestowment of Officer of the New Zealand Order of Merit (ONZM) as well as a Lifetime Achievement Award by the Australasian Performing Right Association (APRA).

Dobbyn agrees with this suggestion, smiling as he enjoys a roll-your-own cigarette.

"It's good to have a clean slate, to have it out there.

"It's a continuing process for me.

"I've already got a bunch of songs ready for the next one.

"It's about putting challenges in front of you."

He admits the thrill of the chase, the quest for that perfect three minutes of pop still keeps him awake sometimes, but "in a nice way".

Dobbyn makes sure he captures those moments, on dictaphone or computer.

He prioritises the tunes or phrases, keeping them as sketches until they demand to be finished or at least presented to others in order to be completed.

"You need the audience to complete the whole process of the song.

"If you just stay in the bedroom and come up with what you think is brilliant, it won't mean anything until it is actually delivered."

Dobbyn has a studio in central Auckland to which he heads most weekdays.

He enjoys the routine of clocking in and listening to jazz ("to keep the mind busy") as he checks his emails.

By the time afternoon arrives, he'll be focusing on his music, working through figures on his upright piano or tinkering on one of his many guitars.

"You can't force it.

"It has to be natural and flow by itself.

"That's kind of why I have embraced the naivety you feel when you come to an instrument, a piano or guitar or something, and forget about what clever things you can do, the stuff you always play, and approach it as if you've never played it before and try to get yourself in that zone and write a song as if you've never written a song before.

"It happened with Welcome Home and a few others.

"They struck me as songs that had to be written, so I just let it flow, didn't think too much about it."

I put it to Dobbyn that though some songwriters are best described as observers, magpies, collectors of other people's experiences, it seems he prefers to examine his own life.

At this he pauses, swallows a mouthful of citrus tart, and responds: "I do, always with the hope that someone else feels the same way.

"That usually comes back as someone saying 'This song means that to me because . . .' I go, 'Right, job done'.

"All you are doing is trying to make the best three minutes for yourself, something you know you can hold on to and be proud of, rather like you are making a really nice armchair or something.

"There can be a lot of work that goes into simplifying something.

"It may appear to be effortless but you craft it so there is light and shade, contrast.

"To be able to road-test a song before you record it is a bonus as well, especially if you've got trusted friends who know how you work and can second-guess you and come up with arrangements that are bigger than the sum of the parts.

"I'm not a control freak in that way.

"All the angst should happen when you are writing it, really.

"It flows a lot easier now and I have confidence that I'm dedicated to the craft more.

"Before, I never felt that.

"I didn't allow myself to feel it."

Dobbyn is referring to his alcohol issues, a by-product of all that time spent touring New Zealand and Australia with Th' Dudes in the late '70s, DD Smash in the early-'80s and, subsequently, as a solo artist based in Australia until 1993, when he left Sydney in a cloud of frustration following the year-long shelving of an album (the result was 1994's Neil Finn-produced Twist, regarded by Dobbyn and critics alike as a career milestone).

"We all have our demons, one of mine being anxiety about those things for all those years.

"I managed to conquer that and just carry on, because there is enough stuff connecting from album to album that seems worthy.

"There are always one or two songs off an album that seem to stick."

Such songs include more than a few Dobbyn has written espousing love for his wife, Anneliesje.

His "constant muse" and mother of their two teenage children, Grace and Eli, she inspired early-'80s hit Devil You Know, a reflection of when Dobbyn courted her by arriving at his future mother-in-law's house with a bottle of whisky in hand, a cigarette in mouth and wearing ridiculously tight jeans.

What was he thinking?

Dobbyn cackles at the memory before turning to more serious thoughts, such as the apologetic Beside You, a highlight off his 1998 album The Islander and one of 10 songs penned by him which feature on APRA's list of top 100 New Zealand songs.

"It was one of those ones that came out really quickly.

"It was a time of resettling into New Zealand.

"I had discovered, with Twist especially, that there were songs all around the place.

"Once I got down to it, I got better at the craft and that became more absorbing than the lifestyle I'd lived, which was your classic drinking.

"I think admitting to yourself after a while that you are actually OK . . . that has been the longest journey.

"If you complicate that by pouring petrol on the flames, which is what drinking did for me, then you are only going to go out of control.

"It's as simple as that, and you'll end up just playing in bars until the cows come home.

"I could see that coming, just before Beside You, so that was a breakthrough for me."

It was "very sudden".

Yet religion seeped in from an early age.

He was also imbued with a strong work ethic; his father was a bus driver and a school caretaker.

"I was too proud to go on the dole, so I sold guitars when times were tight.

"I'm glad I did, because we went through some times in Australia when my wife was working double shifts and what-not and I was refusing to go on the dole or get a job because I was dedicated to music.

"I firmly believed I would find a path. And I did.

"Maybe I took the long way round, but I'm glad I did," Dobbyn says.

These days, Dobbyn likens himself to a diplomat, his entry to select events secured by way of a lyric, a melody.

In November 2008, he was invited to perform Welcome Home at the dedication of the New Zealand Memorial at Hyde Park before politicians and Royal Family members; and again in January as the bodies of the Air NZ crew members killed in a crash off France five weeks earlier were returned to Auckland; Dobbyn has also performed the song to a man, "about 40", dying of melanoma.

"I played to him and his family in the hospice.

"It was a request his brother-in-law had put in.

"I went along feeling sheepish, but I said, 'Look the deal is I'll sing if you let me pray with you'.

"Which I did; I prayed with the family.

"Everyone was in tears and this guy had a big smile on his face.

"He died the next day.

"That blew me away.

"There are a few milestones; you can't avoid the privilege of them.

"But when it comes to playing to a family or something, forget it - I'm a nervous wreck."

There it is again, that cackle. It's infectious.