Whirlwind rise to the top

Joel Amosa performs in the Lexus Song Quest with the New Zealand Symphony Orchestra at the Auckland Town Hall last year. Photos: Supplied
It has been a whirlwind of a year for Dunedin-trained bass-baritone Joel Amosa since he won the Lexus Song Quest. He tells Rebecca Fox about his year of firsts and performing back in Dunedin.

Like running on to the pitch for the All Blacks for the first time is how Joel Amosa describes his debut with New Zealand Opera earlier this year.

''It's a big deal for me, as it wasn't too long ago I'd been in the audience supporting our friends on stage.''

''Honestly, I thought they had got it wrong. Having my name alongside some of my idols - Dame Malvina Major, Dame Kiri, Jonathan Lemalu, Madelaine Pierard; being the fifth Samoan in a row - like holy heck, I was stoked.''

Joel Amosa (right) with the University of Otago Cappting Sextet.
It was especially surprising for him - he had withdrawn from three previous years' competitions - so he thought ''it was about time I gave it a go''.

''So making it through to the semifinals stage was a like a big 'goal achieved' moment. Then making the finals was like OK, I don't think I've prepped for this far and then to come away with the win was like, no way, this doesn't happen to someone like me.

''It took many months for it to sink in and I'm still counting my blessings from the amazing achievement.'' 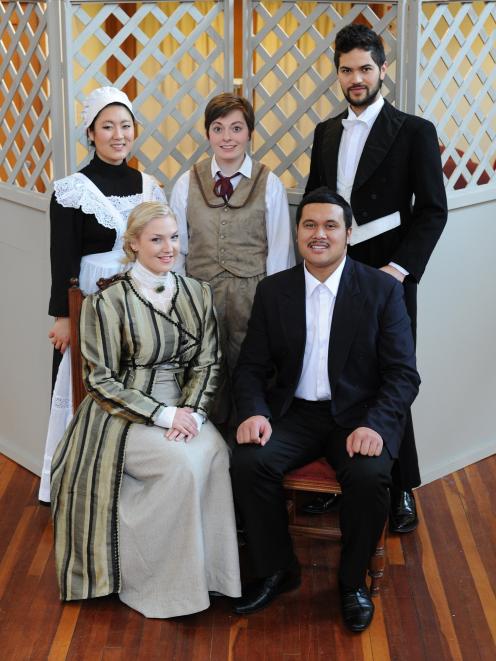 Joel Amosa (front) with the Opera Otago 2012 cast of The Marriage of Figaro (front) Maia Vegar (Countess), back from left, Grace Park (Susanna), Helene Holman (Cherubims) and Kawiti Waetford (Figaro).
When it did sink in he realised it had answered a lot of the ''singing questions'' he had.

''I truly felt that I could actually take this up as an occupation and it really boosted my confidence.

''Career-wise, where do I start? Doors were opening left, right and centre and it's been a whirlwind year since winning.''

Amosa has gone on to debut a Maori opera in San Diego and as the Dame Malvina Major Young Artist with the New Zealand Opera debuted in its latest production of The Barber of Seville, playing the role of Fiorello.

''Singing Fiorello and the officer role for Barber of Seville has been an extraordinary experience.''

He has also travelled to Italy for a two-week intensive masterclass in Italian language and to Scandanavia, where he had consultation lessons and felt out career options.

Amosa is squeezing in a trip to Dunedin for the Dunedin Symphony Orchestra's From the Southern Marches concert, where he will sing alongside fellow Otago graduates Emma Fraser and Anna Leese as well as tenor Manase Latu.

''Any excuse to come back to the promised land, I'm there. Working with the DSO and singing Anthony Ritchie music is a great combo.

''Connecting with Anna, Emma and Manase is a cherry on the top. I learn from listening to these soloists and I can't wait to share the stage with them again.''

The work he will be singing in was the brainchild of former Otago Daily Times editor and historian the late George Griffiths, who assembled the texts celebrating 150 years of European settlement in Otago for Ritchie to set to music.

''I'm thrilled - pleased to see it being performed again. It's been interesting going back to an old work,'' Ritchie said.

From the Southern Marches touches on various moments in the region's history and premiered to a full house during the sesquicentenary in 1998.

It was the first time he had composed a piece like it and he felt quite a responsibility to capture the spirit of the words and history as it covered wide-ranging aspects of the region's history, Ritchie said.

''There are recurring themes - the Scots' thrifty hard work, which is opposite to the greed and avarice of the gold rush - so there are tensions there. There is the good and bad, the slavery and sweatshops of the 1880s.''

For this third airing of the piece (it was performed twice in 1998) Ritchie has made some rearrangements to reflect the changing times, such as including some Maori instruments.

''I'm happy with the work. It is as relevant today as it was back then.''

Later this year Amosa is off to the Lisa Gasteen National Opera School in Queensland to sing the role of Falstaff in The Merry Wives of Windsor.

He juggles ''with great difficulty'' all his singing commitments with his job as a regional administration manager for ASB Bank in Auckland.

''I'm extremely fortunate to be in this position where my ASB family really support me and encourage me to continue with singing. I got into it as it's difficult to make a living as a full-time musician here in NZ.

''So what started off as a one-year job has now turned into a four-year banking career, ASB CEO Excellence Award winner 2018 and a better knowledge of the banking/corporate world.''

However, when work, family and singing clash, trying to balance everything is hard, he says.

During those busy times a typical day might involve working at the bank from 7am to 3pm, then heading to a singing lesson from 4pm to 6pm and then on to a rehearsal for a concert or opera from 7pm to 10pm.

''Those times are tough but I've always been of the mindset where if it works, it works. Not everyone is in this position to make the most of it.''

Amosa started singing as a young boy at home in South Auckland. His grandfather was the pianist and organist for the church they attended and an uncle followed suit.

''I was always singing from a young age, with church, family prayers at home.''

''I was always in the school choir, school barber shop and musical, so I think I just liked singing and harmonising.

''I always had other people around me with similar interests in singing, so it became like a cool thing to do.''

Singing won out over the piano as he did ''so much better at singing in one year than I had in all my years of piano''.

Looking back now he wishes he had been more disciplined and kept up piano tuition because it would have helped his musicianship reach another level.

''But in saying that, having the piano skills has aided my singing career for sure.''

Singing really pulled at him because of its story-telling abilities.

''Whether it's an intense song, deeply spiritual or comedic, that is what I love to do. To perform and portray a story to the listener.

''I also like that each day is a learning curve. One day I can sing as high as, next day, low as, then it's just me trying to piece my vocal puzzle together.''

The University of Otago's reputation and the recommendation of his singing teachers were what made him set his sights on studying in Dunedin.

''If I hadn't made it into the course, I wouldn't be the singer I am today - probably a macho fireman instead because I liked trucks.''

He describes his time at Otago as the best six years of his life. He stayed at Knox College, where he was student president in 2009 and learnt from singing teachers Isabel Cunningham and Frances Wilson.

''Braving the cold and having no money really made me grow up. Working two to three jobs at a time and studying really makes life hard but I totally came out of it really appreciating solid hard work.''

Amosa has fond memories of being part of the Capping Sextet for three years and working as a bouncer and then DJ at the Captain Cook Tavern.

But the most significant achievement was becoming the first member of his family to go to university and graduate - with a bachelor in music and then a postgraduate diploma in music.

''That will always be a special time for me.''

His operatic career began with two leading Mozart roles: Count Almaviva in The Marriage of Figaro with Opera Otago and Don Alfonso in Cosi fan Tutte with both the Auckland Opera Studio and Opera Hawke's Bay. ​