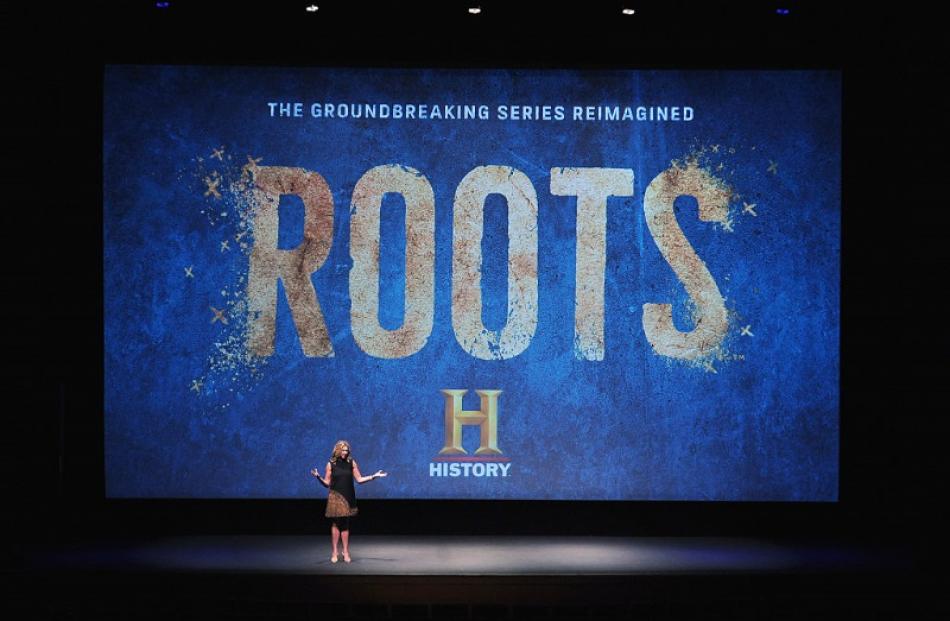 Almost four decades after its premiere, "Roots" still stands as an elite landmark in TV history.

The saga of author Alex Haley tracing his ancestral roots to a young African boy kidnapped and sold into slavery was a phenomenon when it aired on ABC in 1977, gripping a nation with its brutal but ultimately triumphant tale.

Even the power of later projects such as '12 Years a Slave' has done little to dull the brand identification of 'Roots'.

That continuing resonance strengthened Mark Wolper, the son of original 'Roots' producer David L Wolper, to resist whenever he was approached about making a new version.

"Networks and studios have been coming to me for years, saying 'Let's do 'Roots' again.'" said Wolper, who inherited its rights from his late father.

But his resistance crumbled when confronted with a reality check when he tried to get his 16-year-old to watch it.

Said Wolper, "I could not get him to sit still - I physically had to hold him down. Afterward, he said, 'OK, Dad, I get and understand why this is so important. But it's like your music. It doesn't speak to me.'"

That blunt revelation prompted Wolper to do what he said he'd never do - plant his own 'Roots'.

The result is a four-night, eight-hour mini-series premiering May 30 in the US. Positioned as a "re-imagining" of Haley's story, the new 'Roots' is a more extensive, historically accurate account of Mandinka warrior-turned-slave Kunta Kinte and the trajectory of his family's story through American history.

The revised 'Roots' is just one of several projects this year revolving around slavery, including the WGN series 'Underground' and the feature film 'The Birth of a Nation'.

But 'Roots' is different, Wolper maintains. "'Roots' is not a slice of history. It's the story of a family through history."

And despite its vivid depictions of oppression, the new 'Roots', like the original, remains a story of perseverance and triumph that Wolper believes has value in the current political dialogue surrounding race.

Joining him in the project is LeVar Burton, who portrayed the young Kunta Kinte in the original 'Roots'. Burton, a co-executive producer of the History project, was unhappy when he learned that a new 'Roots' was being developed.

"I was incredulous and felt a little bit of outrage," Burton said. "I was skeptical at best - I just could not come up with a reason why this needed to be done."

However, Burton, who followed his 'Roots' debut with 'Star Trek: The Next Generation', the educational series 'Reading Rainbow' and other projects, said Wolper's reasoning "made immediate sense to me. I got it right away".

He also sees himself as "the keeper of the spiritual flame" between the old and the new.

"I figured it would be better to be involved and try and help make this as good as possible instead of being on the sidelines and judging."

The cast of the new 'Roots' includes Laurence Fishburne, Forest Whitaker, Anna Paquin and Jonathan Rhys Meyers. Unlike the original, one actor - London-born Malachi Kirby - plays Kinte both as a youth and an adult.

"I was very aware of the original - I watched it several years ago and it impacted me greatly," said the soft-spoken 26-year-old Kirby.

"I felt a huge weight when I got the part, because I was scared of getting it wrong and how the retelling would affect those who had seen the original, positively or negatively."

Fans of the original will see some familiar touchstones in the new 'Roots', including a scene when Kinte's father, Omoro (Babs Olusanmokun), holds the infant Kunta up to the heavens and proclaims, "Behold the only thing greater than yourself!"

But it's clear that much is different in the retelling. More time is spent detailing the educated culture of the Mandinka people of Gambia where Kinte's family lived.

In the ABC version, the young warrior Kinte is captured by white slave traders. In this 'Roots', Kinte is ambushed by a rival tribe and sold to slave traders.

Nancy Dubuc, president of A+E Networks, which oversees History, said this 'Roots' is much more complex and detailed than the first edition.

"The original sparked a lot of work in academic circles, and technical advances really fleshed out the complexity of the original story," said Dubuc.

And while viewers of the original may recall being horrified by its numerous scenes of oppression and brutality, those sequences pale to the rawness of the new 'Roots'.

In one of the pivotal scenes of the story, Kinte is mercilessly whipped into submission and forced to say his slave name, Toby. In the ABC version, Kinte is whipped by a fellow slave about 10 times. In this 'Roots', Kinte receives 30 lashes across his back by a sadistic white overseer using a spiked whip.

Said Wolper: "The original misrepresents the intensity and the pain of the slave experience. That's as good a reason as any to do this again."

Burton said he believes fans of the original and a new generation will respond to this new version: "If you are alive and living in this democracy, 'Roots' is your story."