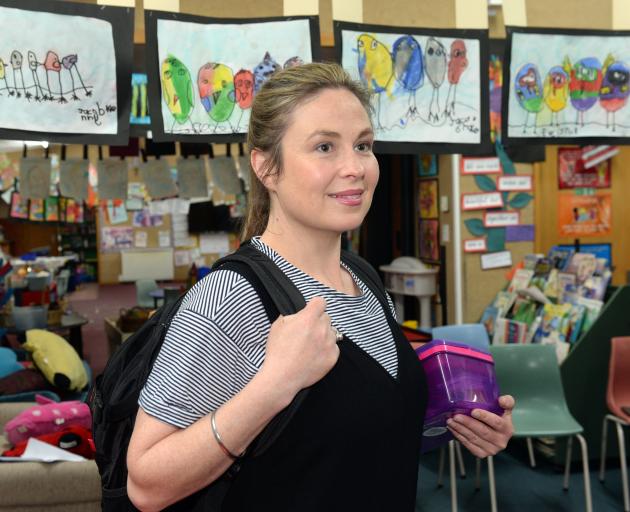 Sara Georgie has no shortage of inspiration for her latest acting role.

She takes on the role of both mother (Karen) and her 7-year-old daughter (Eloise) in Eloise in the Middle.

The play follows the pair as they navigate Eloise’s first solo trip to see her father since her parents separated four years prior.

Georgie is a mother herself, her parents are divorced and she is a teacher of 7-year-olds at St Peter Chanel School.

‘‘The character is a 7-year-old, I have a 7-year-old child of my own, I teach 7-year-olds. The story is so relevant to what is going on for so many people in our community.’’

The story, by Emily Duncan, next year’s Robert Burns Fellow, is written through the eyes of a 7-year-old who is wise to the situation.

Duncan says while her parents separated when she was about 5, the play was not based on her own experience.

‘‘I was interested in how children of divorced or separated parents develop a particular type of emotional intelligence as they move between two households. They have an awareness of maybe the tension that exist between their parents even if their parents are doing their best to be civilised and supportive.

‘‘So it started from a place of writing through the eyes of that 7-year-old child who is quite wise to the situation, but they are a child.’’

Most parents try very hard to do their best in difficult circumstances and the play in no way demonises the father, she says.

‘‘There is an awareness or tension that exists between parents even if they have a good relationship.

‘‘That comes out in the play in funny ways and in heartbreaking ways.’’ 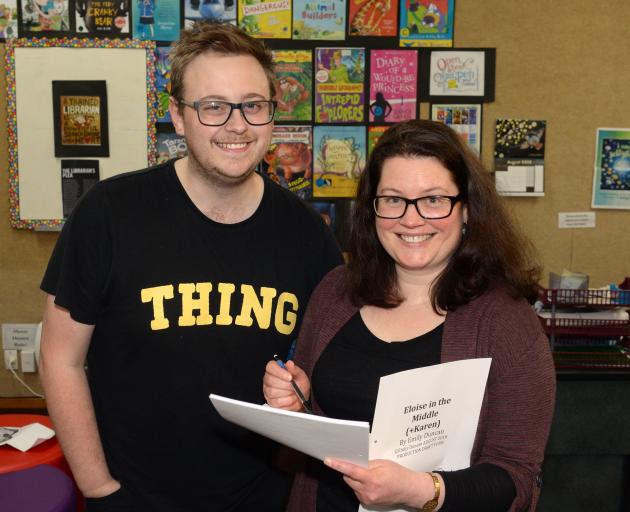 Eloise in the Middle director Jordan Dickson and writer Emily Duncan discuss the script at rehearsal.
For Georgie, an Otago theatre graduate, the role was an ideal one for her to get back on the stage — some might remember her from her last role as Glenda in Ladies Night in 2014 at the Fortune, a role she played while retraining as a teacher.

‘‘I’ve always kept my foot in the door. I love theatre as a vehicle for education, so I did my training with that in mind.’’

Georgie has wanted to work with Duncan since doing a reading of her very first play many years ago and, with the topic of this play resonating with her, it was the ‘‘perfect fit’’.

‘‘Right then I was absolutely in awe of Emily. This is one I really wanted to do.’’

As the play is set in a classroom, Georgie and the crew have been rehearsing in her classroom. It is also where Georgie and director Jordan Dickson went to school.

‘‘It’s lovely to have all the children’s artwork and things around the wall, props at hand. It’s quite a different rehearsal process than being stuck in a rehearsal room for three weeks.

‘‘It almost feels like I’m in research mode all the time watching the 7-year-olds... interact with each other and how intelligent they are — we sometimes do not give them enough credit.’’

Being the sole actor on stage carries a great responsibility but the flow and feel of the script means the words come easily, she says.

During the play, Eloise escapes into other ‘‘worlds’’ which have been created digitally by the design students at Otago Polytechnic.

‘‘Eloise is quite an imaginative child.’’

Georgie sees the play as a way to open conversation between parents and children on what could be a fraught topic.

For Duncan, seeing the play come to life is very special. She first wrote the genesis of it in 2013 and it went on to win Playmarket’s Plays for the Young in 2013 and be published in its anthology Here/Now: 8 Plays by Award-winning NZ Playwrights.

Since then she has written a new and extended version of the story, which has become the play.

‘‘I hope young people are able to feel their situation is not a unique experience.’’

The production had been commissioned for the Fortune Theatre’s 2018 season, but the theatre’s sudden closure put the show in jeopardy.

However, Duncan and producer H-J Kelly, who founded Prospect Park Productions, decided to produce the work themselves.

‘‘It’s about resourcefulness. It’s not about the building, it’s about the people. We’re still here,’’ Georgie says.

She added it is important that works continue to be made in Dunedin so the city retains the talented professionals behind stage personnel in the community.

‘‘We also need to continue to tell our community’s stories.’’

This year it launched a three-part podcast Dark Dunedin: Heaven Looks On during the 2018 Dunedin Fringe Festival which won the City of Literature Beyond Worlds Award.

They hope the production of Eloise will bring new audiences through the door and provide local drama pupils with another opportunity to see live theatre.

To see
Eloise in the Middle, Dunedin Public Art Gallery auditorium, September 29 to October 6. Pay what you can night, Thursday 27.