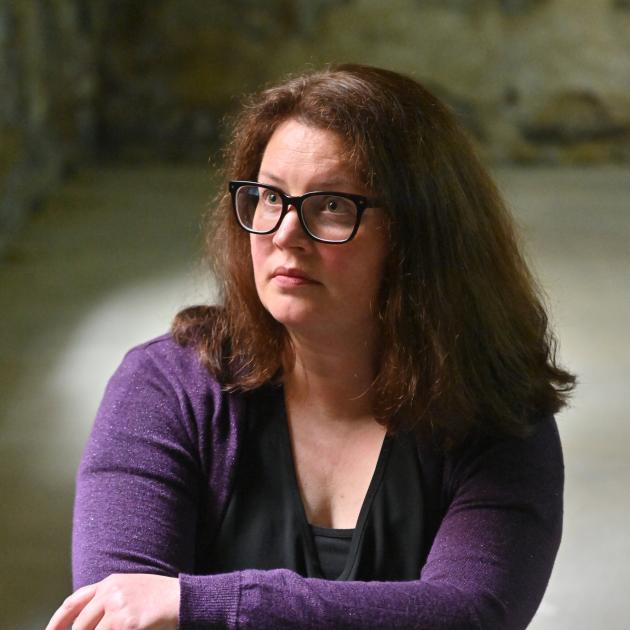 When people used to tell playwright Emily Duncan she should write a book about her experience living with Cushing’s disease, she would joke: ‘‘I’ll do it when someone pays me to.’’

When she was awarded the Robert Burns Fellowship - which gives writers a salary for a year - last year, she realised she had run out of excuses.

‘‘It has given me space to try different ways of working than I might not have otherwise tried.’’

Alongside writing the book, she completed two more seasons of the Dark Dunedin podcast with Prospect Park Productions, which will go into pre-production and be released this year.

She has also finished another play - a historical fiction about Ethel Benjamin and Emily Siedeberg.

She was also able to direct one of her own plays in the Fringe Festival.

‘‘I was a bit wary about directing my own play unless I had distance from it. The script was written five years ago, so I had the distance to tackle it more objectively.’’

But writing the book has been the major project of the fellowship.

‘‘Historical fiction was part of my thesis, so I got to re-exercise my writing muscles.’’

Duncan was diagnosed with Cushing’s disease about 20 years ago, when her mother took her to see her doctor.

‘‘I’d been feeling increasingly unwell over a period of time, but no GP I’d seen had picked up on anything, but my mother’s GP had a hunch, so tested me for Cushing’s disease.

‘‘I think in almost 40 years as a physician he’d never had a patient with Cushing’s disease and I didn’t look like an extreme case of Cushing’s. I was really lucky.’’

Some scary news followed: she had a benign tumour on her pituitary gland.

Surgery was advised. Until then, Duncan had never been a patient in a hospital.

‘‘It was completely new to me. I couldn’t understand why it would mean taking a year out from university for a major surgery and that I’d feel so awful from that operation before I’d feel better - I had no comprehension of that.’’

She went into complete remission with a good chance she would be cured, but it reappeared every few years, resulting in surgery again in 2003, 2005 and 2011. Each surgery required up to a year out of her life to recover.

‘‘You can’t remove from your mind the precariousness of our bodies going haywire. For Cushing’s to reoccur, there only needs to be one cell left behind. It can sit there for a few years before deciding to grow.

‘‘That was crushing. I decided to opt out of a fifth surgery and go the radiotherapy route.’’

That treatment caused her body to stop making hormones, so she has to replace those by taking steroids.

‘‘It’s explained to you [that] you will most likely lose all pituitary functions, but they can be replaced. It’s quite a different experience as your hormones slowly die off. You have to continually test your levels and adjust, then often you have to adjust another one as a result.

‘‘That is why this tiny little gland is so incredible. It’s like the control centre of our bodies and works in concert with everything.

‘‘While it’s incredible that you can replace them, it’s still not the same as your body instinctively making that extra burst of cortisol when you need it.’’

It gets ‘‘tricky’’ when a sufferer gets a cold or flu, which requires extra doses of hydrocortisone to deal with the infection and can sometimes result in needing emergency treatment.

As Cushing’s is a notoriously difficult disease to diagnose, not well understood and reasonably rare - about 10 people in a million get it - Duncan has been asked by her endocrinologist to talk to medical students about the impacts of the condition and has encouraged her to write the book.

‘‘This is a generalisation but a lot of them are robust healthy young people, as they should be, but have no idea about living in a persistently precarious state.’’

With a long-term condition it is important for sufferers to have autonomy over their own ‘‘being’’, she believes.

‘‘Especially when so much of your story already exists in stacks of medical files. In some way, it’s a personal redressing of that - medical files have a purpose but they can be quite different from the day-to-day lived experience, especially with an invisible condition which is, understandably, not well known by people, even medical professionals.’’

Reliving a lot of those experiences for the book has been difficult but having the space and time through the fellowship has been ‘‘crucial for me in writing it’’.

‘‘This year has allowed me to work differently and progress the book in a very different way than previously for me - the closest comparison is doing my Phd thesis.’’

One of the most important things for Duncan about writing the book is using her writing skills to share her experiences for other people to benefit from.

‘‘Medicine is science, but patients and doctors need to communicate in and around that empirical framework that goes beyond the test result.’’

Finding other people with the same condition and learning about their experiences is important to anyone with a medical condition. Duncan remembers reading the memoir of Hillary Mantle about her experience with serious endocrine conditions.

‘‘A few passages in that really hit the nail on the head. I’d never seen that before on a page.’’

She believes her book will help not only those with the condition and their families but medical professionals as well.

With her fellowship year over, Duncan is now moving on to other projects. She has started a full play script set in the Southern Alps involving six female characters of varying ages - at least two over the age of 40 - and hopes to further develop it.

She is also passionate about encouraging and providing professional theatre opportunities in Dunedin and wants to be part of redeveloping that scene in Dunedin to make it viable.

So she is continuing her work with the Otepoti Theatre Lab, which was launched last year to develop emerging playwrights, and with Prospect Park’s writing laboratories held at Fringe Festival headquarters each fortnight.

‘‘There is a real hankering in the community to be able to work together. So much of writing is a solo pursuit.’’

Having a dedicated time to write gave her a time to slow down and think about writing projects at each stage rather than rushing through them to meet deadlines in the time she had.

‘‘It removed the urgency. I wasn’t desperate to get things finished. I find that the answer or solution will come as long as I do something else - usually it comes to me at 3 in the morning.’’