Erina Daniels directing Party with the Aunties at Miramar Ranger’s Clubrooms. Photo: Dave Lintott
Erina Daniels is bringing a play about her family home for her ‘‘southern’’ family to see. She tells Rebecca Fox about discovering stories about aunts, uncles and cousins are universal.

A play created from a need to remind herself of the joy her family brings her has taken on a life of its own for Mosgiel-born actor Erina Daniels.

While living in Wellington and working on completing her master's degree in theatre arts from Toi Whakaari New Zealand Drama School, Daniels found she had a ''major'' project to do and decided to combine all the skills she had been learning with a piece about her family.

''It comes from my desire to make a connection with my family from across distance.

''That is why I needed to make a piece about my family. I'm always away from them travelling for my work.''

Growing up, Daniels' family had shifted around different ''back blocks'' farms before settling in Heriot, in West Otago.

''My mum's family, my Pakeha whakapapa is from Otago and Clutha Southland. My dad, like many other Maori men, had chased the shearing season from the North Island to the South Island where he met my mum, and grew a strong family.''

The cast of Party with the Aunties gets among the audience. Photos: Supplied
She grew up surrounded by aunties, uncles and cousins.

''We worked hard and played hard. At our parties, my uncles would be stomping their wool-socked feet to keep rhythm as they played guitars. And my aunties would sing song after song - they knew all the words.''

Those experiences formed the inspiration for Party with the Aunties.

Daniels based the work around a 50th birthday party, including all of the usual ingredients a party has - getting ready, arriving, speeches, the ''get on it'' and the wind-down.

Into the mix she threw the archetypal characters most families have of aunties, uncles and cousins.

''I wanted a piece to remind me of the joy my family brings me.''

Daniels remembers writing her proposal for the piece and how she wanted to do it through party interactions and pragmatic humour. 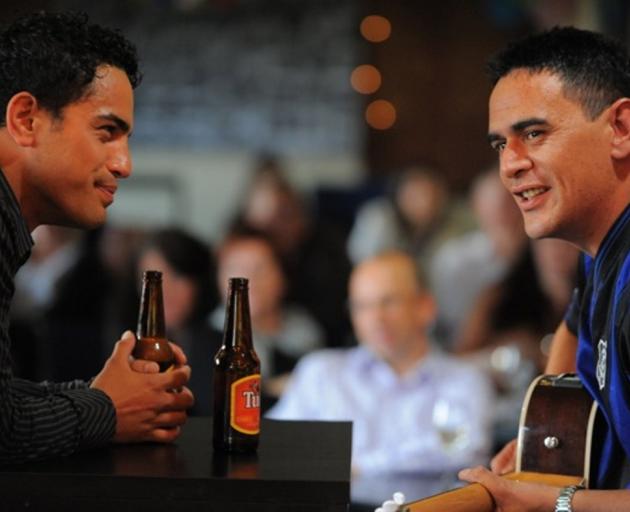 Matariki Whatarau (left) and Jamie McCaskill in Party with the Aunties.
''Those two things are two things I can define that my family has in bucketloads - big hearts and a no-nonsense attitude.''

She then workshopped the concept with other actors and theatre practitioners and discovered they all had similar stories about their relatives.

''We amassed them into 13 characters and put them together in situations with one another over the course of a party.

''You need to do that to hold the humour that goes into it.''

Then to give the play a longer life, she structured it so that different actors could come and go as necessary.

Party with the Aunties was first staged in a garage in Paekakariki, on the Kapiti Coast in 2011.

Daniels has deliberately chosen more casual venues to enable people who might not normally go to the theatre to be comfortable attending.

''I wanted to put it in a place where my aunties might be comfortable going to see a piece of theatre. I barnstormed about why some people don't want to go to the theatre ... because it's not around them for them to do it. So I thought I had better take it to them.''

That has resulted in the play being performed in a variety of venues from sports and working men's clubs to town halls, which Daniels describe as her favourite.

''It's anywhere people would be likely to come, and where a 50th would happen - they don't generally happen in theatres.''

In Dunedin, the shows will be performed in bowling clubs, community halls and pubs. It will enable her aunts and cousins from Dunedin, Owaka and Gore to see the shows.

She also liked that it enabled community groups associated with these venues to raise money over the bar or from a sausage sizzle.

The play has gone to festivals in Nelson, Christchurch and Taranaki and represented the theatre of Aotearoa at the 2016 Festival of Pacific Arts, in Guam.

In Guam, the cast had a similar reaction to what they get in New Zealand with audience members coming up after the show remarking how similar their auntie was to one of the characters.

''It's family no matter where you come from. That what happens in my family reads for others is choice.''

Daniels got into acting after school, studying at the then College of Performing Arts in Mosgiel and began her acting career in Dunedin.

''I can withstand being in the public eye when you are on stage 'cause that's your job.''

It was when she auditioned for a job as a puppeteer for Tiki Tiki Television at Taylor Made Productions she met Cindy Diver, who co-founded Wow! Productions, the company which is bringing Party with the Aunties to Dunedin.

She then got involved in one of Diver's shows at Allen Hall where she met a ''bunch of other collaborators'', including Hilary Halba and Lisa Warrington.

''Because Dunedin is so small you know everybody in theatre. They helped me starting out.''

As well as getting Party with the Aunties ''home'' for the first time, Daniels is one of four directors helping Toi Whakaari students with their ''solo'' end-of-year works.

''We're the outside eye, challenge them.''