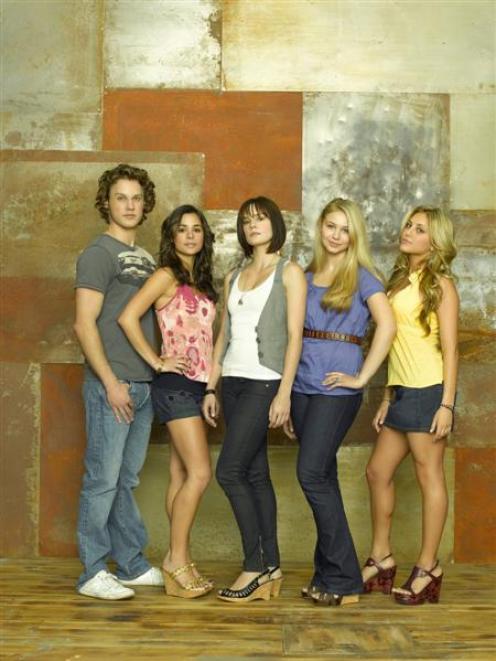 The cast of Make It or Break It (from left) Zachary Burr Abel (Carter Anderson), Josie Loren (Kaylie Cruz), Chelsea Hobbs (Emily Kmetko), Ayla Kell (Payson Keeler) and Cassie Scerbo (Lauren Tanner). Photo TVNZ.
I know a family-friendly show is doing its job if my children beg me to let them watch it.

Make It or Break It is a series about gymnasts, and what a relief that is.

A combination of beauty and strength, gymnastics is one of the few sports that requires its athletes to compete as a team but also against each other, which makes it a perfect venue for all that teen angst.

More important, it is a blessedly silent break from all that singing - Glee better end the run of music-based children's shows, or I will go out of my mind.

Beyond that, Make It or Break It is, in some ways, maddeningly familiar: scruffy but cool new kid disrupts streamlined cliquish girl world.

In this case, that world revolves around the Rock, where a trio of stars is about to be ranked for state finals.

At least in comparison to her McMansioned peers.

Emily has a single mother who's a bit of a hottie, can't keep her calendar straight and serves dinner out of cans.

There's also a brother in a wheelchair.

So, clearly, Emily has been forced to grow up too soon.

As Lauren realises that Emily could easily take her place in the team's top three, betrayal of an alarmingly intense nature ensues (one wonders if Tonya Harding was a script consultant), setting up a newly-beleaguered but still determined team in a fight against the corrupt forces of the moneyed establishment.

Although not known for his enjoyment of girl's gymnastics, Karl Marx would be proud.

There are many familiar tropes in Make It or Break It, the most obvious being Lauren, who is not only rich but also blonde. (When when will this stereotype die?) Scerbo dutifully flounces, spits out sarcastic comments and appeals to Daddy, but to her credit, also projects an insecurity and occasional naked fear that allows Lauren to be a real girl.

That, along with the great shots of gymnastics, is what lifts Make It or Break It, written by Holly Sorenson, from the many girl-power, collective-touting message shows that fill the various children-friendly venues.

Even within the confines of their assigned stereotypes, each of the girls seems naturally complicated.

Hobbs' Emily is all angles and bangs and nail-bitten determination - she wouldn't know TV sass if it tripped her in the middle of her floor exercise.

But watching her hang on to one slim possibility - that she could be a gymnast - is to see that moment in every adolescent when the hope of an identity dawns.

When, realising that things are not going to work out as planned, she says in despair, "But I did everything right"; her anguish will resonate with anyone who has thought they could control the vagaries of life through planning and preparation. (Peri Gilpin plays her mother, which also promises great things.)

No doubt there will be many lessons about the importance of pulling together and being true to oneself, etc, but Make It or Break It seems prepared to take on not only the obvious life lessons but also the crucial undercurrents that move so many lives well into adulthood.

And that, as much as the graceful wonder of gymnastics, will make it worth watching.