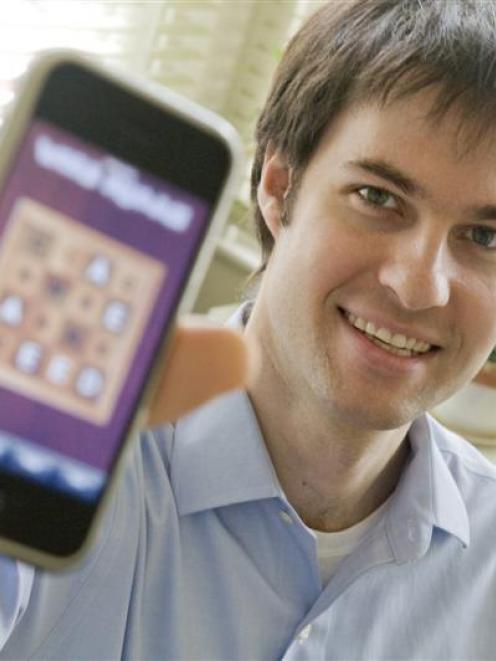 Keith Shepherd quit his day job and is marketing iPhone word puzzle games and a downhill sledding game called Little Red Sled. There's a gold rush mentality out there, but some say they just want to be able to dream up something and make it happen. Photo by The Washington Post.
Todd Moore didn't foresee that he was about to embark on a new career when he bought his first Mac last year.

It just sort of happened.

Moore (35) had been spending his working life pulling down six figures as a network security professional, a job he liked well enough.

But, after reading a few get-rich-quick stories about programmers making good money from selling applications designed to run on the iPhone or iPod Touch, he decided to give it a go.

How hard could it be?Learning the tricks of iPhone development in his spare time, Moore rolled out a handful of applications and posted them for sale on Apple's App Store.

Some went nowhere, sales-wise, but a couple have hit the big time.

The biggest success, so far: White Noise, a $1 program that generates soothing sounds for people who have a hard time getting to sleep.

Card Counter, a $3 application designed to help users learn the principles of counting cards to win at blackjack, has also been a brisk seller.

Last month, on the software sales-tracking charts at iTunes, both programs appeared on the "top 20" most-purchased list.

That's about the time Moore gave his two weeks notice and decided to pursue this dream full time.

"In one week, I made what I would've made in four months," he said. "That's when I decided to pull the trigger."Apple's online software shop has given rise to a new set of entrepreneurial programmers such as Moore, hoping to make a living, or a bit of supplemental income, by dreaming up software products that will prompt iPhone users to part with a buck or two.