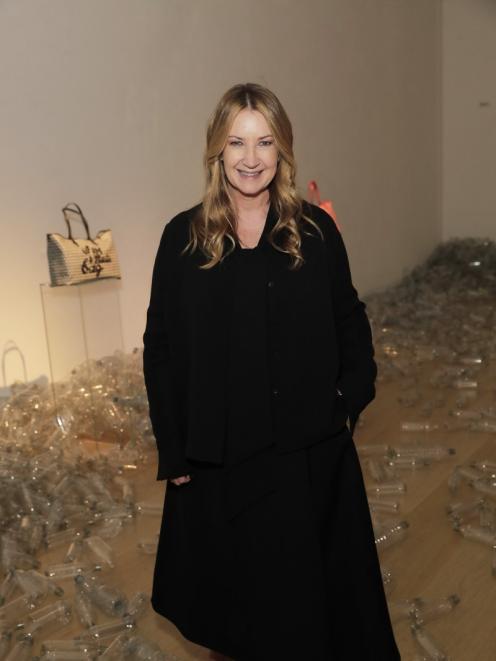 We are sitting in Anya Hindmarch’s bright office in a converted brewery in south London and the Queen of Bags is stroking a fabric sample as if it were ermine (faux, of course).

‘‘It’s so soft, it feels like cotton,’’ the luxury handbag and accessories designer says.

Hindmarch spent two years researching and developing this fabric, which is spun from recycled plastic bottles, for her latest sustainable fashion initiative, the ‘‘I AM a plastic bag’’ tote, which debuted at London fashion week.

And as I do, the pioneering designer, who insists she is ‘‘not an

eco-warrior’’ yet brought us the game-changing ‘‘I’m NOT a plastic bag’’ tote in 2007, charts her latest journey — ‘‘I hate that word, but you know what I mean’’ — in sustainability.

It is a journey that has seen her hanging out in recycling depots, her staff bin-diving and even partners of staff scrabbling about in skips.

‘‘Every line on my face is to do with this,’’ she says, pointing to herself. ‘‘This has not been normal business for us. It’s been really stressful, but we are there.’’ 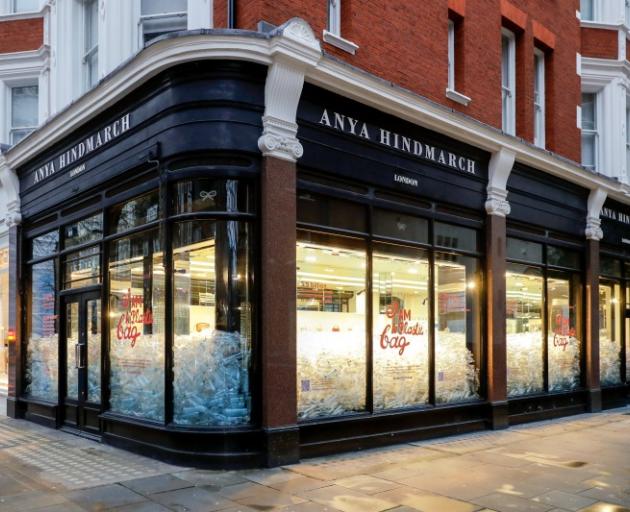 One of Anya Hindmarch’s London stores filled with plastic bottle during London Fashion Week in February.PHOTOS: GETTY IMAGES/NET-A-PORTER
She’s used to stress, though. The £5 white canvas ‘‘I’m NOT a plastic bag’’, created for a charity, graced stellar shoulders, including those of Keira Knightley, Lily Allen and Reese Witherspoon. It was a global sensation — and it unleashed a frenzy.

More than 80,000 people queued at Sainsbury’s stores for the limited-edition tote, which had a run of 20,000. It sold out, appeared on eBay for upwards of £300, and was marketed in counterfeit form for close to double that.

When it was launched in Taiwan (where, incidentally, the new fabric has been made), a stampede of hungry shoppers resulted in 30 people being hospitalised. There was a similar bag-bath in Hong Kong, but no injuries. Beijing and other cities ended up delaying the release of their stock.

Her first alt-statement bag ‘‘was a lightbulb moment’’, she says.

The campaign’s impact proved that ‘‘fashion is not frilly’’, but can actually be a powerful communicator, says the designer, who was made an MBE for her contribution to fashion in 2009.

The bag was created for the social change charity We Are What We Do (now Shift) and published in tandem with a modest handbook called Change the World for a Fiver.

In 2007, the United Kingdom used 10.6billion plastic bags, according to the British Retail Consortium, down to 6.1billion in 2010. Sainsbury’s cut the number of bags it gave away by 58% in the subsequent two years, saving 13,200 tonnes of virgin plastic. Levies of 5p (NZ10c) on plastic bags sold in supermarkets in the UK were introduced between 2011 and 2015.

More than a decade later, green has earned its stripes, vegan-boasting is a thing, and Greta Thunberg is a teenage prophet for the Anthropocene. Even so, Hindmarch is steeling herself for the inevitable flak. I give her a trial run and ask if she is guilty of green-washing. After all, her customers are presumably either too old or too wealthy, or both, to take action.

‘‘No! This is our generation’s war,’’ she says, and she talks about how her grandparents’ generation ‘‘sacrificed their 19-year-old sons’’ for World War 2. The way to win the climate challenge is to take ‘‘baby steps’’.

The ‘‘extremes’’ are the problem, she says: ‘‘Raping the land for profit. Doing what is unnatural. Pushing for the last cent of profit.’’

Putting the planet before profit is notable, given the company had seen punitive losses in 2017 and that Hindmarch only took back the reins of the company last year, when she became managing director. She pledged to be ‘‘brave and decisive’’. The eco-tote is just that: it is durable and luxurious. You buy one and you keep it.

While she admits that the process has been ‘‘very complicated’’, her goals are underpinned by ‘‘common sense. I am no scientist. I am not even an eco-warrior. It’s about not making new things out of new. That’s not good for the planet. It’s a waste of energy and resources’’.

The company is ‘‘transitioning’’ to a new way of making. Producing the bag, which is currently made in Italy — apart from the fabric — has entailed looking at everything, from the fabric’s weather-resistant coating (extracted from old car windscreens) and the provenance of the various inks and dyes to the leather trimming. This is made from responsibly-sourced leather from a tannery in Italy. Hindmarch had initially favoured vegan or recycled leather, but they were ruled out (their levels of polyurethane were too high). The bag has just got the green light to be made exclusively in Italy, fabric and all.

The first ‘‘I AM a plastic bag’’ to land is the charcoal in white and two shades of grey, the letters of the logo repeated on cubes to form a geometric pattern. Other colours will follow. The reason you didn’t see the bag on the catwalk during LFW in February was because Hindmarch decided to host a protest at her Anya Hindmarch’s London stores, which closed and filled their windows with 90,000 plastic bottles, the number of plastic bottles purchased globally every six seconds.

Waste management is Hindmarch’s new passion and it would be yours if you listened to her marvel at how recycling depots sort waste. She grabs her phone and shows me pictures of conveyor belts of plastic and aluminium in a recycling site.

‘‘It’s like Willy Wonka.’’ The quantities horrified her. ‘‘We are completely disconnected from what we throw away.’’

The full collection, which has been delayed because of Covid-19, includes ‘‘girlie stuff’’, such as natty make-up bags and pimp-my-phone pouches.

‘‘See. You wear it like this!’’ she says, modelling a pouch across her jacket.

‘‘Hands free! I hate the idea of giving a whole hand to a phone. To a glass of wine or a child, maybe, but not to a phone!’’

And therein lies the Anya Hindmarch magic: her values a mixture of heritage and time-honoured, of roast chicken and chatter around the kitchen table with her big family, of ‘‘being like our parents’’ and making do, and of the new and innovative. The yellow 1970s smiley face she turned into one of her signature motifs probably says it all. — Guardian News & Media

Limited styles in charcoal and clementine are available at Anya Hindmarch and through Net-a-Porter. A launch date for the full collection has yet to be released. 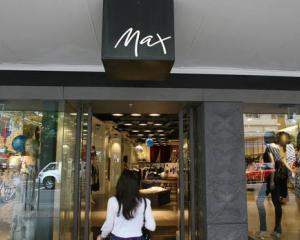 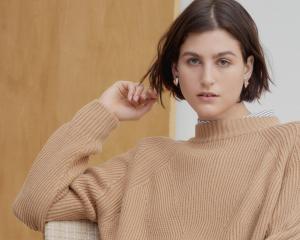