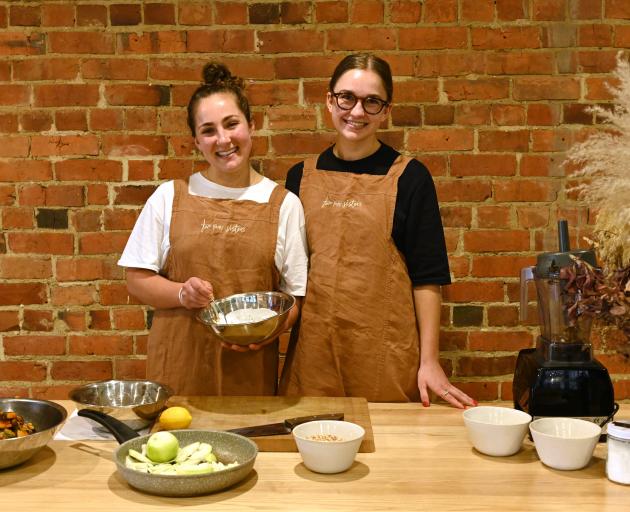 In just three years Margo and Rosa Flanagan have set up their own kitchen, published three cookbooks, toured the country a few times and launched their own app.

And it is not going to stop there.

With inspiration from growing up with parents who owned their own business, it seemed a natural fit for the pair who after struggling with their health found a new direction.

‘‘It’s just happened organically. We never thought we’d be working together and doing this but we’ve taken the opportunities as they’ve come up.’’

They are happily open about their health struggles - Rosa, a former elite athlete developed an eating disorder and Margo struggles with chronic fatigue and endometritis - to help encourage more openness about health conditions.

‘‘We had become unhealthily obsessed with being healthy.’’ 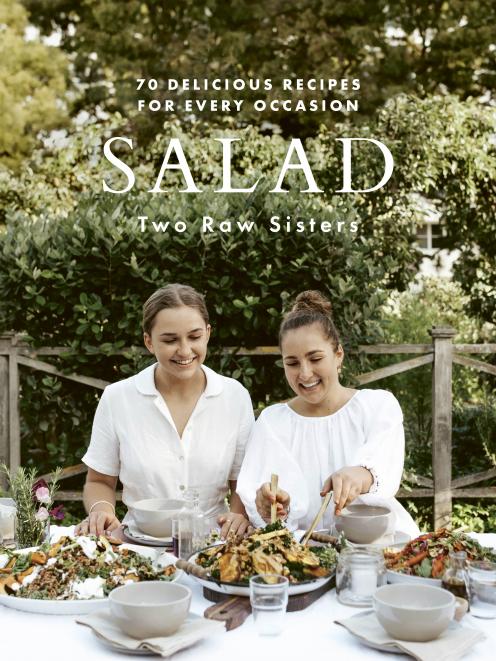 THE BOOK: Extracted from Salad: 70 delicious recipes for every occasion by the Two Raw Sisters. RRP$45.00. Published by Allen & Unwin NZ.

Both found adjusting their diets to be based on plants helped their conditions although they are quick to point out they are not vegetarian - they eat meat and fish - but their meals are based around plants first.

‘‘Everyone is different. We have always said ‘all eaters welcome’. We encourage a healthy, sustainable lifestyle, not on-off dieting,’’ Rosa said.

Part of that is creating tasty, fulfilling dishes that show people how to use vegetables they have eaten for years in different ways.

‘‘It’s about being inventive - it doesn’t have to involve superfoods or expensive ingredients.’’

For them it’s not about jackfruit, banana blossom or vegan meat alternatives with foreign additives.

‘‘We’re about using what’s in the pantry or fridge - oats, coconut, pumpkin, chickpeas.’’

The pair are asked all the time if they get on. The answer is yes, most of the time. They play to each other’s strengths and give each other space when they need it.

Margo attended culinary school in the United States before she came home and Rosa studied nutrition as a back-up to her sporting career.

Based in Christchurch, where they grew up, they have a test kitchen which is their base for developing recipes, workshops, demonstrations and corporate events.

Their down-to-earth approach has you grinning when you realise they hit the nail on the head - a pantry full of packets of exotic spices used only once and expired in 2016, or half packets of random grains from quinoa to millet filling up the shelves.

They are proponents of using up what you have in the pantry first before buying anything else. So instead of slavishly following a recipe, even one of theirs, they encourage people to use what is in their pantry first.

So their new book Salad uses about six different spices in different combinations throughout to add the flavour.

‘‘We want our recipes to be used as guidelines and bases.’’

They are quick to point out iceberg lettuce does not make an appearance in the book as that is not what salads are about, they say. Neither are bland stir-fried or steamed vegetables.

‘‘In the morning people pull the chicken, steak or fish out of the freezer for tea but don’t think about the vegetables - they’re an afterthought.’’

Their aim is to make visually attractive, tasty salads with plenty of texture, flavour, colour and sustenance.

‘‘It is amazing what you can make with limited pantry staples.’’

They have recently launched an app which allows people to access more recipes and tips and has a handy feature where people can put in the ingredients they have and are given recipe suggestions.

‘‘Cookbooks are great, but people are visual and want to see how we do it.’’

Their journey has had its ups and downs and the pair have had to learn to keep to one or two projects rather than everything they want to do.

‘‘It’s been a wiggly road but it’s built us up stronger.’’ 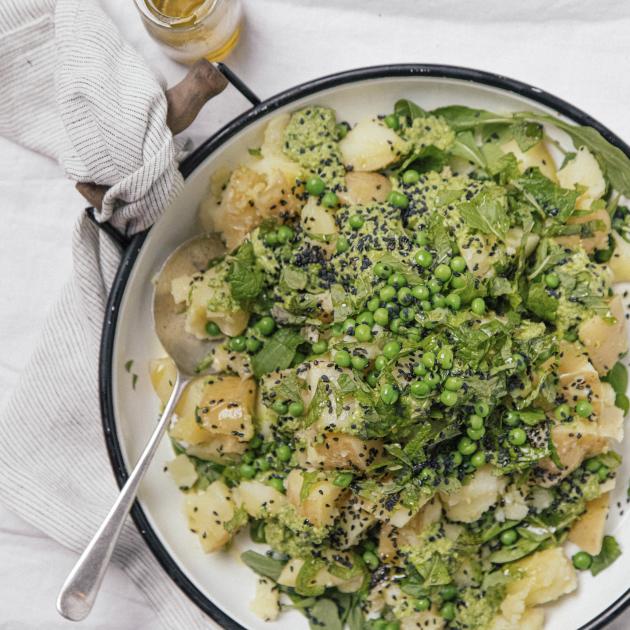 ‘‘You've always got to have potatoes for the boys,’’ is something our mum has always said when she is planning a dinner party with friends or our Christmas Day feast.

Rosa and I have always thought boiled potatoes were quite boring, so we’ve taken them to the next level with a vibrant green minty pea smash and punchy preserved lemons.

This one is for the boys in your family who can’t live without their potatoes. Delicious served with any meat, fish or poultry.

A great substitute for avocado smash in winter. During summer we love to add an avocado to it and/or use half peas, half edamame beans. This dip is best made only 1-2 hours before serving to ensure it keeps its fresh, vibrant green colour.

zest and juice of 1 lemon

Place a large pot of salted water over a high heat. Bring to the boil, then add the potatoes and boil for 15-20 minutes, or until soft. Drain, then roughly crush about half of the potatoes, leaving the rest whole.

Leftovers will keep in an airtight container in the fridge for up to 2-3 days.

For the smash: Place all the ingredients in a blender and pulse until combined. You don’t want it to be super smooth - keep some texture.

Leftovers will keep in an airtight container or jar in the fridge for up to 2 days. 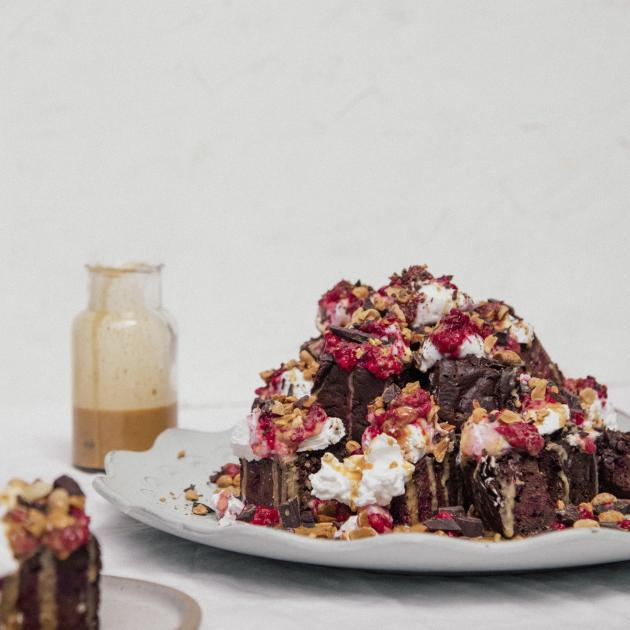 We love to dream big when it comes to desserts. When we were brainstorming ideas for our ‘‘sweet salad’’ recipes, we wondered how we could incorporate vegetables in a sweet way. The result: a beetroot avo mud cake like no other.

Preheat the oven to 180degC and line a 23cm cake tin or loaf tin with baking paper.

For the peanut butter shell, place the ingredients in a small bowl and mix until you have a smooth beige liquid. Set aside.

In a small bowl, roughly crush the raspberries with a fork.

To assemble, cut the mud cake into chunks and place half randomly on a large flat plate. On top of each mud cake piece dollop crushed raspberries and coconut yoghurt. Drizzle with half the peanut butter shell and finally sprinkle over half the dark chocolate and chopped peanuts. Repeat by gently building a second layer on top. Serve immediately.

Leftovers will keep up in an airtight container in the fridge for 4 days.

Tip: To make 1 flax egg, mix 1 tablespoon ground flaxseed with 3 Tbsp water and leave for 5 minutes, or until thickened. 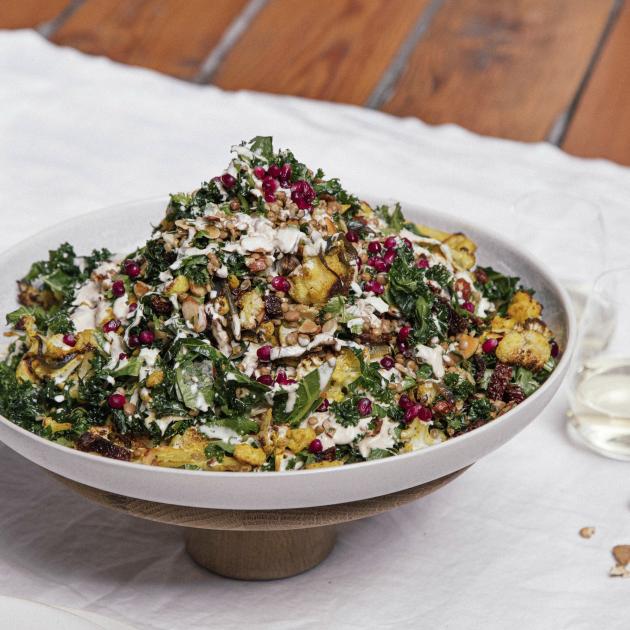 Like all the salads in this book, this one is filled with so many textures, colours and flavours. Serve as is or with avocado, salmon, lamb, beef or chicken.

Preheat the oven to 200degC

400g can lentils, drained and rinsed

Preheat the oven to 200degC Place the cauliflower, red onion, turmeric, cumin and salt on a baking tray. Drizzle with oil and toss to combine.

Roast for 10 minutes, then turn the oven to the grill function and cook for a further 10-15 minutes. Remove from the oven and allow to cool slightly.

For the cumin yoghurt, place all the ingredients in a cup and mix to combine. Set aside.

For the lentil tabbouleh, place all the ingredients in a medium bowl and gently toss to combine.

To serve, use one large flat platter or divide between plates. Start with a layer of cauliflower, followed by some lentil tabbouleh and some cumin yoghurt. Repeat for another 1-2 layers.

Leftovers will keep in an airtight container in the fridge for up to 4 days.