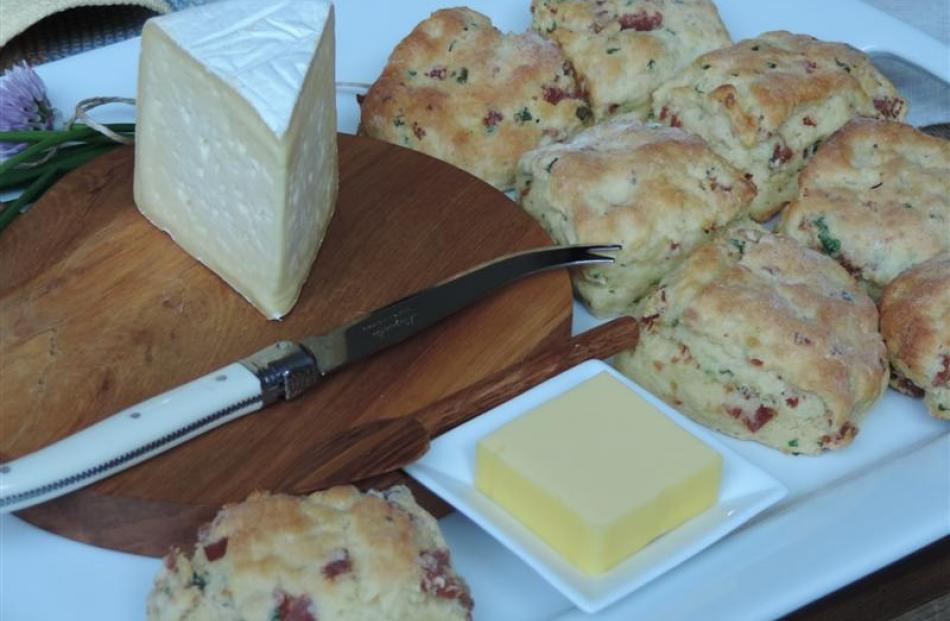 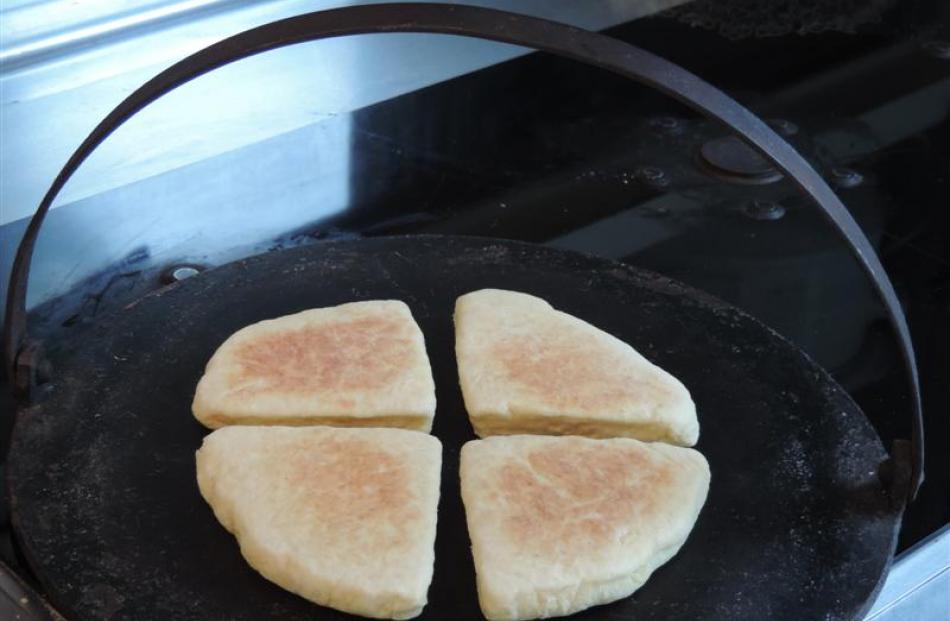 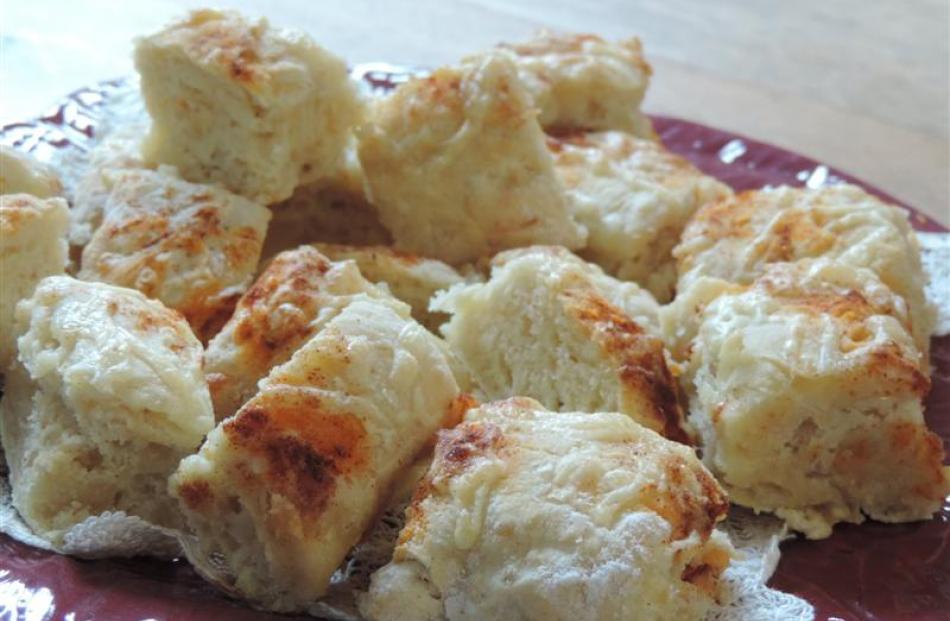 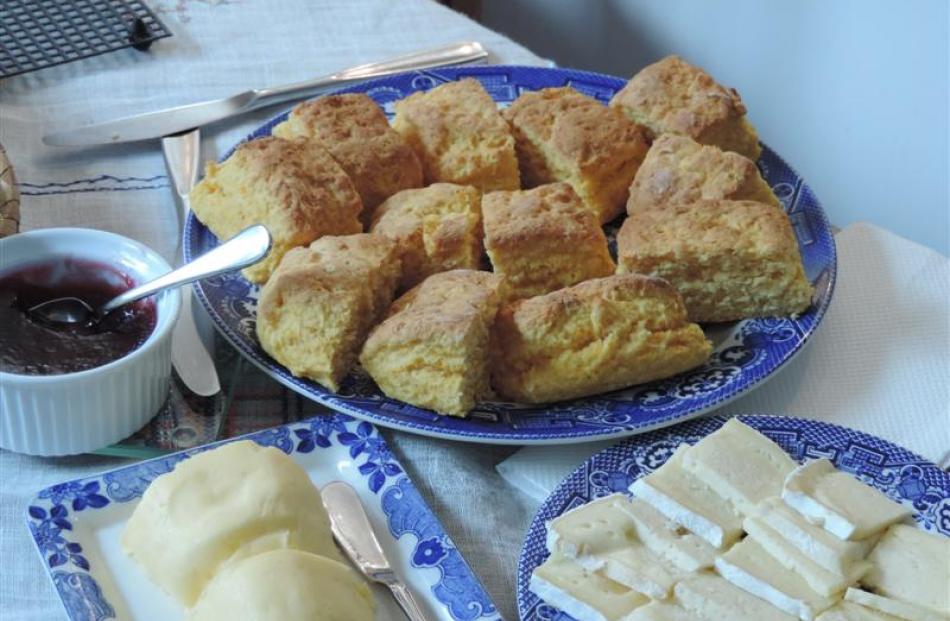 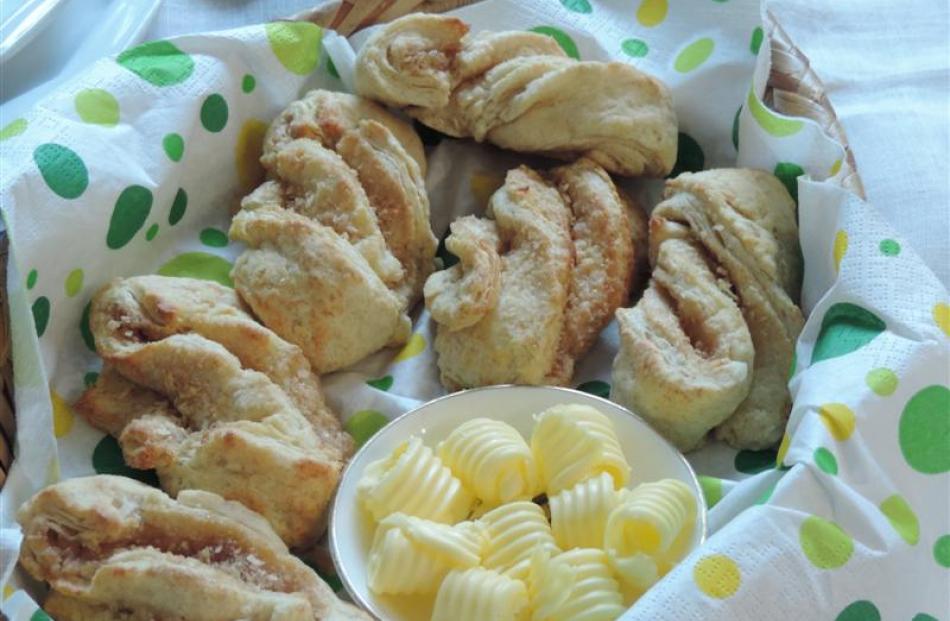 Scones are popular in cafes these days, although few people whip up batches at home as our grandmothers used to. Charmian Smith and friends make some scones.

When I was about 8, my mother said it was time to learn to cook and took me into the kitchen. We started with scones.

She showed me how to rub the butter into the flour and baking powder with my fingertips and mix it lightly with milk, shape the dough into a rough square, cut it into smaller squares and bake them.

The secret, I learned, was not to handle the dough too much. From then on it was always my job to make the scones.

Scones were always quick to make, inexpensive and a favourite for morning or afternoon tea, especially if there was a group of people to feed. Fresh out of the oven they are delicious spread with butter and jam (or cream and jam if it's a special occasion).

If they are a day old they need to be toasted, or frozen and reheated.

There were also variations with grated cheese (leave out the butter) which are lovely and crisp with melted cheese on top, and if you were brave you could put a pinch of cayenne in for a hot bite.

There were sweeter ones with sugar and luscious lumps of dates or raisins.

There were also potato scones, but I didn't know about them then. That was about all the choice in those days.

Then scones went out of fashion and everyone made muffins, bran and apple at first, then every sort under the sun.

Now muffins can be as rich as cakes, oozing chunks of chocolate or cream cheese.

Scones are back in fashion, and they, too, are made in numerous flavours: savoury, bacon, pumpkin, pinwheel stuffed with vegetables or fruit, some more like a cake than a simple scone, and there's a variety made with lemonade and cream instead of butter and milk.

Sometimes sour buttermilk is used, especially if baking soda instead of baking powder is the raising agent, as baking soda needs acid to work.

Scones can be round or square, dainty individual mouthfuls, big enough for a meal as you find in some cafes, or baked in a large flat shape and cut into wedges for serving.

Scones are basically British and originated from quickly made flat cakes or breads of wheat, barley or oatmeal baked on a griddle, according to Alan Davidson in the Oxford Companion to Food.

They were particularly popular in Scotland, where they were often known as bannocks when cooked as large rounds.

As baking soda and baking powder came into use as raising agents in the mid-19th century, the familiar light, raised scones (sometimes called soda scones) began to be found in recipe books, according to Emeritus Prof Helen Leach.

Originally they were cooked on a griddle (or girdle in Scots) on top of the stove or fire, as ovens were not common.

''I suspect oven-cooked scones became more common in the 20th century. They can be cooked as a larger batch and involve less watching as well as no turning,'' she said.

Scones were obviously popular in Dunedin 100 or more years ago.

Drop scones, known to us in New Zealand as pikelets, are like small pancakes.

They usually include egg and are a wetter mixture than a scone dough so spoonfuls of the mixture can be dropped on to a hot pan greased with butter and cooked on both sides.

• Scones come in such a variety that I thought it would be fun to ask local members of the New Zealand Guild of Food Writers to make a batch and bring them for afternoon tea.

They ranged from old-fashioned girdle scones, cooked on a griddle, to cheese scones, two sorts of pumpkin scones, chorizo and chive scones, and coconut twists.

Joan Bishop made chorizo and chive scones from her cookbook A Southern Woman's Kitchen. She said she would use more chorizo next time and has changed the amount in this version - a reminder of how recipes evolve and change.

Sift the flour, salt, baking soda, and caster sugar into a large mixing bowl. Add the butter and rub it in with your fingertips until the mixture is the consistency of rolled oats. The butter does not need to completely disappear. Add the chorizo and chives and stir to combine.

Place the egg, yoghurt and milk in a bowl and whisk or beat to mix. Pour into the middle of the bowl of dry ingredients and use a table knife to mix to a soft dough that is almost, but not quite, sticky. Then turn out on to a lightly floured surface.

With floured hands, knead briefly and lightly for 10-20 seconds. Pat into a rough square about 2cm high then cut into nine squares. For miniature scones cut into 16 squares.

Place the scones 2cm apart on a baking tray. Bake in the preheated oven for 10-12 minutes until risen and golden.

Transfer the hot scones to a wire rack, Served buttered on the day they are made or freeze until required, then briefly microwave to thaw and warm.

A creamy farmhouse brie is excellent to serve with them.

Put the flour, salt, baking soda and sugar into the processor and process briefly to mix. Add the butter and process very briefly until the butter is blended with the flour but is about the size of lentils. Add the chives and the combined liquid ingredients all together and pulse three or four times, stopping just prior to the mixture forming a ball around the blade. Add the chopped chorizo and pulse three more times. The chorizo will not be completely mixed into the dough at this stage but will be fully incorporated during the hand kneading and shaping of the dough.

Tip the contents of the food processor on to a lightly floured surface and knead for 10-20 seconds. This will ensure that the chorizo is well integrated into the dough. Pat into a square and proceed as above.

Prof Helen Leach made old-fashioned girdle scones from a recipe given to her sister Mary Brown by Margaret Philip.

Put the girdle or a frying pan on the stovetop to heat.

Sift the flour, baking soda, cream of tartar and salt together and rub in the butter with your fingertips.

Mix to a soft, elastic dough with the milk.

Roll out about 1-2cm thick and cut into four wedges. Prick with a fork.

Place on the fairly hot griddle until well risen and brown underneath and a skin has formed on top. Turn and bake the other side. It will take about four minutes a side.

My choice was cheese scones which a friend reminded me about. I used to make them when I was a teenager as they were easier than plain scones because you didn't need to rub butter into the flour, and the cheese can give a nice crisp top. This recipe is adapted from the Edmonds Cookery Book (1968).

Sift the flour, baking powder, salt and cayenne. Stir in the grated cheese. Using a knife, mix to a soft dough with the milk.

Turn on to a lightly floured board and knead lightly. Pat or roll out to about 2.5cm high. Sprinkle with extra grated cheese and a little paprika.

Cut into squares and place on a baking tray lined with baking paper.

Cook in a hot oven for about 10 minutes.

Both Mary Browne and Barbara Keen made pumpkin scones. Mary's recipe came from her husband's grandmother, Everil Browne, of Dunedin, and Barbara's from the Australian Women's Weekly in the 1970s. Both are similar to the recipe Queensland senator Flo Bjelke-Petersen, widow of former premier Sir Joh Bielke-Petersen, made famous.

Prof Leach has found a pumpkin scone recipe in Chronicle and North Coast Advertiser (Queensland) from July 28, 1916, and suggests they were probably an Australian specialty.

Heat oven to 220degC. Beat the butter and sugar. Add the egg and beat well. Add the mashed pumpkin. Sift the flour, cream of tartar and baking soda and add to the pumpkin mixture. Stir, adding sufficient milk to make a slightly softer than usual scone dough. Pat out to about 1.5cm thick and cut into 12-16 pieces. Place on a cold, greased oven tray. Bake 10-15 minutes.

Serve with butter and jam or farmhouse brie.

Barbara Keen's version adds ½  tsp ground nutmeg and uses self-raising flour instead of flour, cream of tartar and baking soda. She filled them with creme fraiche and orange marmalade.

Janet Mitchell made coconut twists, a scone variation she remembers having for breakfast when she was a student in a hostel. Her recipe is adapted from Basic New Zealand Cookbook, by Eleanor Gray (1978)


Preheat oven to 200degC. Sift flour, baking powder and salt into a bowl. Cut the butter into the flour with a pastry blender or rub it in with your fingertips until the mixture resembles coarse oatmeal.

Make a well in the centre of the flour and pour in the milk in a constant stream while stirring rapidly with a knife. Add sufficient milk to make a soft dough just moist enough to leave the sides of the bowl to form a ball.

Turn on to a lightly floured work surface and knead lightly with the fingers.

Cut into 3cm wide strips. Hold the ends and twist firmly in opposite directions.

• Make sure everything is ready and the oven hot before starting to mix the scones.

• Quick mixing and brief kneading is all that is needed or the scones will be tough.

• Keep the mixture moist, but not too sticky or the scones will be dry.

• Avoid having too much flour on the work surface during kneading and shaping. The extra flour will be worked into the dough, resulting in heavy layered scones.

• Use your fingers to knead briefly, not your hands as you would with bread.

• Round scones are pretty but cutting scones into squares or wedges means you are not over-handling the scraps as you reroll them.

• Baking scones in too hot an oven results in compact, hard, over-browned scones, while too low a temperature results in lopsided, pale, doughy products.

How should ''scone'' be pronounced? Wikipedia has an amusing rhyme that shows the two pronunciations - the latter preferred in Scotland, much of the rest of the UK and in New Zealand and Australia.

I asked the maid in dulcet tone

To order me a buttered scone

The silly girl has been and gone

And ordered me a buttered scone.