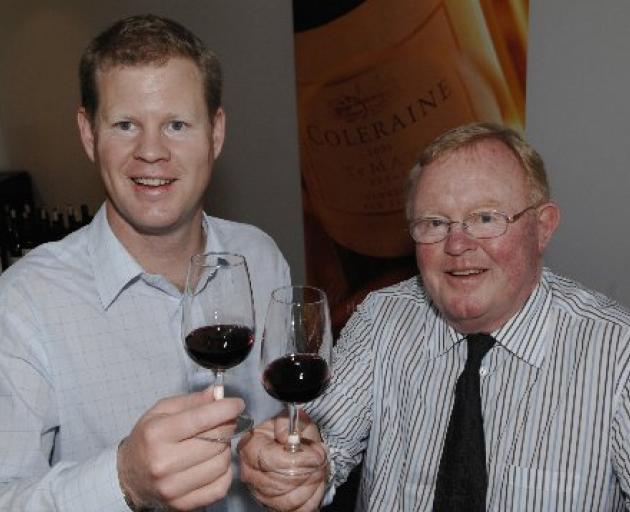 Te_Mata.JPG
John Buck has long been among the leaders of the New Zealand wine industry. Now he is preparing to leave his Te Mata vineyard in the hands of the next generation. Charmian Smith reports.

John Buck has always had a vision that New Zealand could produce not just good wine, but great wine that could stand alongside the great wines of France and the rest of the world.

Over the past 40 years, he has focused on this vision, not only in his own vineyard, Te Mata Estate, in Hawkes Bay, but also in the wine industry itself in his position as chairman of the Wine Institute (now New Zealand Winegrowers) from 1991-1996.

In 1995, he received an OBE for services to the wine industry.

He and his son Nicholas, marketing manager at Te Mata, and winemaker Peter Cowley were touring the country giving trade and public tastings of new wines and some older ones - although Cowley had flown back to Hawkes Bay before they reached Dunedin last week because a hot weekend meant harvest was about to begin.

The visit to Dunedin was part of the celebrations of 25 years of Coleraine, which began with a vertical tasting of all the vintages in London last June.

After working in the wine trade in New Zealand and Europe, Mr Buck took over Te Mata Estate in the late 1970s, intending to make great red wines that would get better with age and match those of the great Bordeaux chateaux in quality.

His flagship, Te Mata Coleraine, a blend of cabernet sauvignon, merlot and other traditional Bordeaux varieties first made in 1982, has since gained an enviable international reputation as one of the best and most classic of its style in New Zealand.

Mr Buck remembers the late Len Evans, an Australian wine guru, speaking disparagingly about New Zealand wine 25 years ago, but since then there has been an improvement in quality across the board, he says.

But what he considers really important is that eight or 12 premium producers are doing a handful of ‘‘really classy wines that are pushing us out to that top international level''.

Last year, two leading British wine writers, Hugh Johnson and Stephen Spurrier, visited New Zealand and were impressed. Johnson had been a director of Chateau Latour, one of the six first-growths in Bordeaux, and he was impressed not only by Coleraine but also by its ability to improve with age, according to Mr Buck.

Spurrier said there were three great areas in the world that produced Bordeaux blends; Bordeaux itself, Napa in California, and Hawkes Bay - he didn't include Australia, Mr Buck said with delight.

Their writing sparked the interest of American wine guru Robert Parker, who had always been uninterested in New Zealand wine. He sent his assistant, Neal Martin, who spent 10 days late last year tasting 2000 New Zealand wines. They are still waiting for publication of their conclusions, Mr Buck said.

He believes that varieties like chardonnay, riesling, gewurztraminer, viognier, and above all the cabernet sauvignon merlot blends, are overshadowed by sauvignon blanc and now the emergence of pinot noir as the fashionable New Zealand wine exports. It has resulted in the less fashionable varieties being undersold.

New Zealand has the range of latitudes to produce all styles of wine, he says.

His prediction for Central Otago is that while its pinot noir is catching a lot of attention now, methode champenoise sparkling wine may well be the star.

The wine industry has grown spectacularly in the last 15 years. In 1992, the then Wine Institute, of which he was chairman, did a study that predicted that by 2000 they would be exporting $100 million FOB worth of wine.

‘‘At that time, our export sales wouldn't have been $20 million but in fact we achieved it a year or two earlier.

‘‘We might do that a bit earlier, depending on the size of the vintage, then we might double that again in another five years.''

This is remarkable when you consider that the lead time, acquiring land, planting and bringing it into production and making the wine, is about seven years.

That means the decisions about two billion dollars worth of exports in seven years are being made now, he said.

He thinks all the wine made will be sold, but that some new wineries do not have the skills to position their wine and market it or have access to distribution networks. Their wine may well end up being sold under some other label.

In the past 25 years, several major legislative changes have affected the wine industry, including the licensing of supermarkets and other food stores in 1991, and the changes to quarantine regulations from 14 years to 14 months that has allowed numerous new varieties and best clones to be imported.

Late last year a New Zealand-wide resource management standard for the wine industry was adopted, which applies to all wine regions.

Mr Buck sees few major threats to the New Zealand wine industry. One might be multi-national corporate managers who do not understand the wine industry, although in New Zealand that did not seem a problem at present.

Another potential, perennial threat is the political establishment's failure to treat the wine industry holistically, such as slapping on taxes because the product contains alcohol when it is also a major employer in rural areas, and is a major New Zealand brand with spin-offs for tourism and food sales, he said.

‘‘I'm not at all bothered about the carbon footprint - that's about as relevant as Y2K was. New Zealand's growing and trade practices are documented for the whole world to see and they stand scrutiny.''

After the middle of the year, Mr Buck intends stepping back from Te Mata, leaving sons Nicholas and Jonathan, a grapegrower, to manage it, although he intends to be available when needed.

He has taken on some new interests, including being on the board of a proposed opera house in Hawkes Bay, and of the National Library that has taken over the poet laureate, which Te Mata sponsored from 1996-2008.

‘‘It's been a labour of love. You are intimately connected with the land and you have to sell it. Now it's going on to new stewardship, makes it all seem sense.