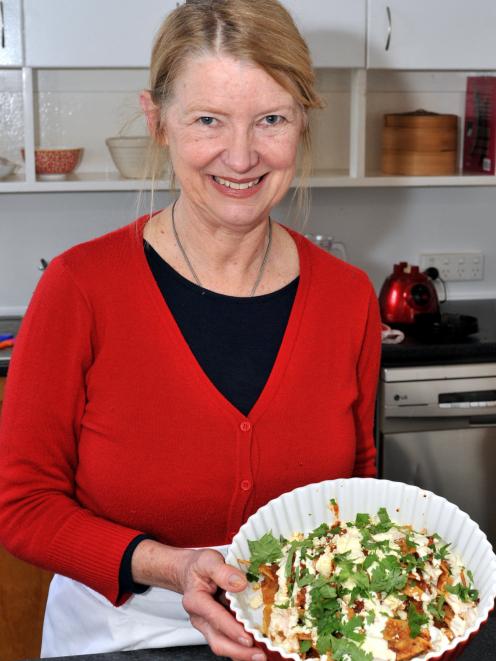 Flavours of home is a series of recipes from around the world cooked by people at home in Otago. This week, Courtney Campbell, from Mexico, shows us how to make Chilaquiles rojas de pollo.

Courtney Campbell was born and raised in Mexico City, although she lived in Kenya for 18 years. She came to Dunedin from California three months ago to live near her son and his family.

Chilaquiles [chee-lah-kee-less] is a classic dish much loved by Mexicans and is eaten at breakfast, especially after a night of partying: it is even said to cure hangovers.

There are many versions of this dish of crisped tortilla chips in a spicy sauce, red with tomatoes and red chillies, green with tomatillos and green chillies and instead of chicken you can use eggs, chorizo or nothing.

If you are starting with raw chicken, poach it in some chicken stock with a couple of sticks of celery, a red onion and a carrot all roughly chopped, for about 20 minutes or until cooked. Tear into pieces.

On a hot, dry frypan or comal (see Tips below), put the dried ancho chillies to warm. This releases the flavours. When warmed on both sides and fragrant, put the chillies in a bowl of cold water to rehydrate. When softened, cut off the stalks and slit the chillies down the side to flatten.

Remove seeds and veins if you like a mild spiciness, otherwise leave them in. Do the same with the fresh chilli if using. Tear into pieces and put into the blender with a half a cup of water to help it blend.

Put the whole tomatoes, the quarter onion and the garlic on the hot, dry pan to char and cook. Turn from time to time, and when cooked, remove the skins.

Add the tomatoes, onion and garlic to the blender and blend to form a salsa or sauce. It should be fairly thin.

Heat a tablespoon of oil in a pot, add the tomato mixture and cook gently for 2-3 minutes, stirring frequently.

Heat the vegetable oil in a large frying pan. Fry the tortilla strips, a few at a time until crisp but not brown. Transfer to a bowl or plate lined with kitchen paper. Salt lightly.

When all the tortilla strips are crisp, mix them into the hot salsa until well coated.

Use a shallow dish to serve. Layer the tortilla crisps and salsa in the dish, with the chicken pieces, as you would a lasagne. Top with crumbled feta, drizzle with the thinned creme fraiche or sour cream, and sprinkle with chopped cilantro (coriander).

Thanks to Afife Harris and Centre City New World. 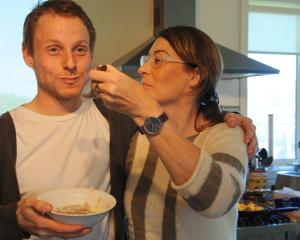