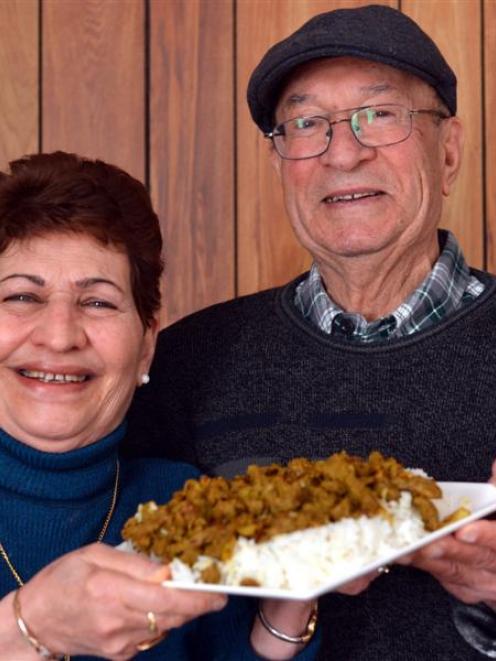 Photos by Peter McIntosh.
Suad Mohammed and Mahmud Fathalla, originally from Iraq, came to New Zealand in 1996 escaping the troubles in their home country and joining their sons who were doing postgraduate study in Christchurch.

They had lived in the United States and Canada where Mahmud studied in the 1960s before returning to Iraq.

When they came to New Zealand, they had to leave their belongings behind as they could bring only a small bag.

One of their sons and his Kiwi wife live in Auckland, and the other in Switzerland with his Swiss wife, Mahmud says.

Shawirma is cooked everywhere in the Middle East, often barbecued as kebabs on sticks or on a vertical rotisserie like a doner kebab, but it can also be cooked in a pot. Everyone makes it differently, Suad said. 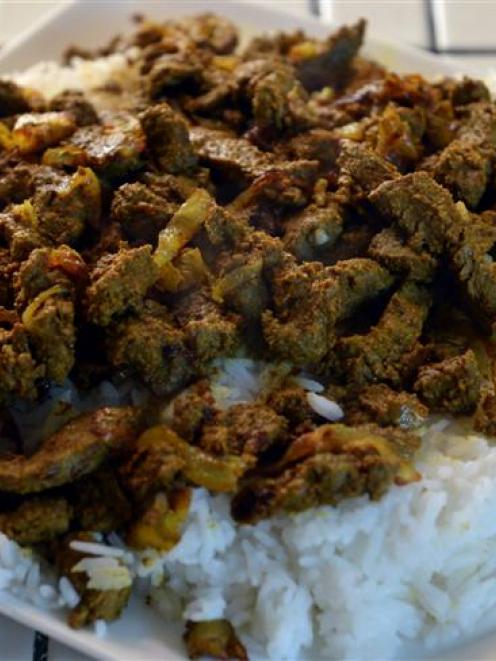 Remove any fat from the meat.

Mix all the marinade ingredients together and spread on both sides of the meat. Allow to marinate for at least two hours.

If you prefer a milder flavour, rinse the meat lightly to remove some of the marinade.

Put the meat in a covered pan - a little of the rinsing water will cling to it - and cook over medium heat. Stir from time to time to make sure it doesn't stick.

Peel and halve it then slice it thinly into half rings. Heat the oil in a frying pan and cook the onion over medium heat, stirring from time to time until soft and browning at the edges.

When the meat is cooked, about 15 minutes, add salt to taste, and some more spices. Suad uses cumin, nutmeg, turmeric, curry powder and coriander, but says you can use whatever you like.

Stir it for a minute or two then serve with rice, a salad or in sandwiches.

To cook rice, Mahmud uses three cups of jasmine rice, washes it three times, then adds water to the depth of two finger-widths above the rice and cooks it in a rice cooker on high for 25 minutes.

• You can use any meat you like, but Suad prefers beef to lamb, as it is less fatty.

• You can use any spices you like. Garlic is often used, but Suad doesn't like the flavour. You could cook garlic with the onion as well.

• Because fried onion was used in so many dishes and took a while to cook, she used to cook a lot at once and freeze it.

• Thanks to Afife Harris and Centre City New World.