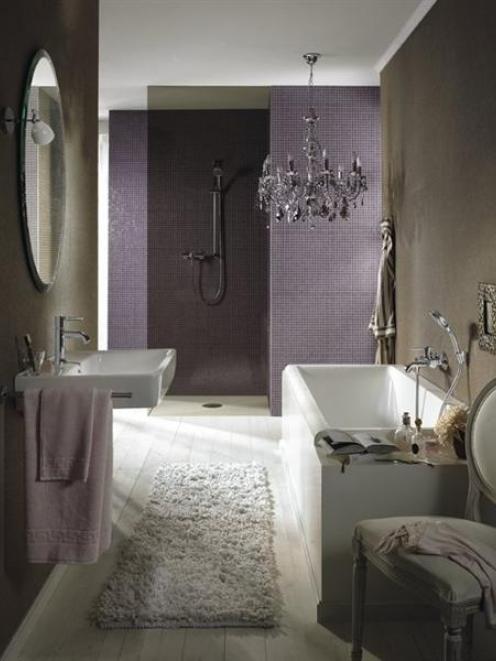 The humble bathroom has undergone a radical transformation.

In a few years, it has gone from a small, dark space down the back of the house to one of the most luxurious rooms in the home.

Basins are square and chunky or sensuously curved. Freestanding baths are statement pieces. Storage units are more like pieces of furniture than mere cupboards and even heated towel rails have a sculptural quality.

Julie McBride, of Mico Bathrooms Dunedin, says it's all designed to transform the bathroom into a relaxing retreat.

A New Zealand-designed shower system in one of the seven concept bathrooms at Oakleys, Dunedin, is typical of this trend towards luxury.

Not only does it have two showerheads, but essential oils can be added, intersecting jets give the impression of far more water than is actually being used and a thermostatic mixer ensures the temperature remains constant (showroom manager Leanne Foote says females tend to shower a few degrees hotter than males so there is also an override button).

Another shower head, the size of a dinner plate, can be mounted on an arm from the ceiling to give the effect of a gentle shower of rain. 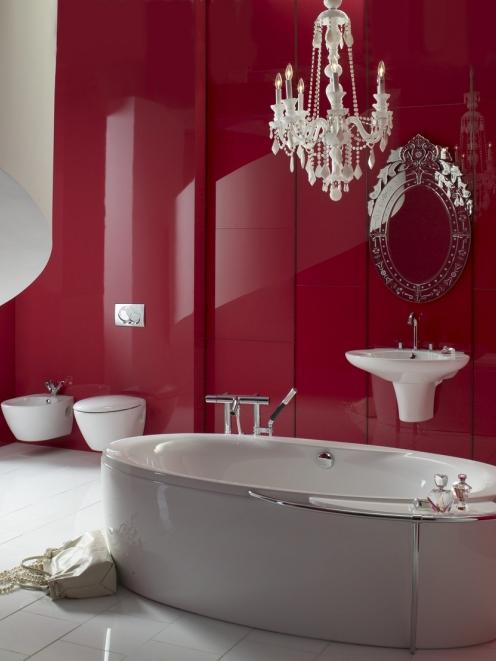 Kohler Presqui'le suite, from Mico Bathrooms.
Practical considerations have not been forgotten though. At both showrooms there are slimline, wall-hung vanity units for when space is at a premium, tall storage towers and toilets with hydraulically operated soft-close seats.

Search the catalogues and you will find other smart ideas too. Anti-bacterial treatments and anti-slip surfaces are standard on many products, while others use water-saving technology.

The Caroma Profile Concepts toilet has an integrated hand basin and tap that releases handwashing water into the cistern for flushing.

Mico Bathrooms says the latest styles range from the minimalist to the glamorous. Customers are tending to buy vitreous china rather than acyrlic basins and some households with more males than females are installing urinals.

Sound systems are adding to the comfort of the bathroom, lighting is being used for atmosphere as well as illumination, and freestanding baths and basins means the walls function as the frame of the room only.

What hasn't changed is the popularity of white fixtures, with chrome taps and accessories. Woodgrain vanities and the odd black bathroom suite provide contrast but most people prefer to introduce colour with easily-changed items such as towels and paint.

Ms McBride says a bathroom should reflect the personalities and lifestyles of those using it. One person will love crisp, square lines while another will want curves. One customer will hate cleaning and spend extra to have a back-to-wall toilet with concealed waste pipes. Another will prefer a really good shower head.

While there is a wide range of products to suit all budgets, a mid-range bathroom suite and taps will cost about $5000 to $6000, excluding building, plumbing and electrical work, she says.

Some fixtures need to be ordered in so it's best to choose them up to two months in advance.

Before doing that, you need to know the size of your bathroom, and if you have mains or unequal water pressure - a fact that can be checked by a plumber, and that determines the types of taps you can use.

If you choose a deep bath or a shower with multiple sprays, you also need to think about how you will heat the water and if there will be enough hot water left over for other uses, such as washing the dishes.

Your plumber will need to know what type of toilet trap is needed - S to take the waste through the floor or P to take it through the wall - and the position of the shower mixer before wall linings go on.

Consultants say it is also important to provide proper ventilation, and to get a good seal around the shower because water leaking in behind walls is expensive to remedy.

To keep your bathroom looking like new, the experts recommend following the instructions on the back of cleaning products and never using abrasives. Use a squeegee to prevent a streaky water look in the shower and clean taps with a soft, damp cloth.

White is a popular choice for bathrooms but too much of it can make a space look sterile and cold.

New Zealand paint manufacturer Dulux says adding splashes of this season's hottest hues such as charcoal, red, lime green or hot pink in the form of accessories or accents can brighten up and add interest to an all-white bathroom.

For those not quite ready to make a bold colour commitment, soft muted shades of greens, greys and blues also look good when paired with a crisp white.