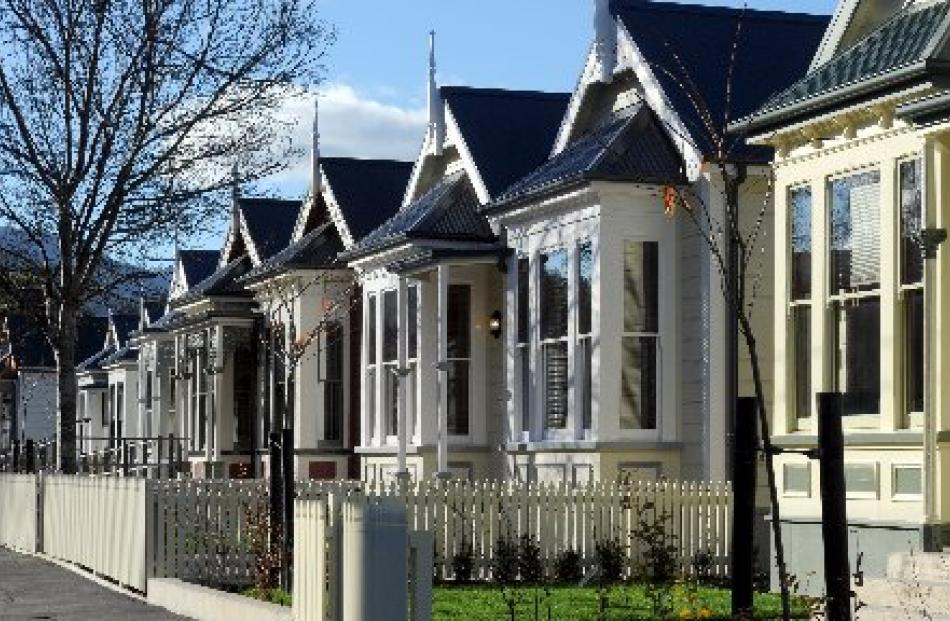 The facades of five villas on Castle St were retained as part of the new University of Otago childcare centre while out the back, new buildings have a glass atrium in which small groups of children can do projects and artwork, and bright splashes of... 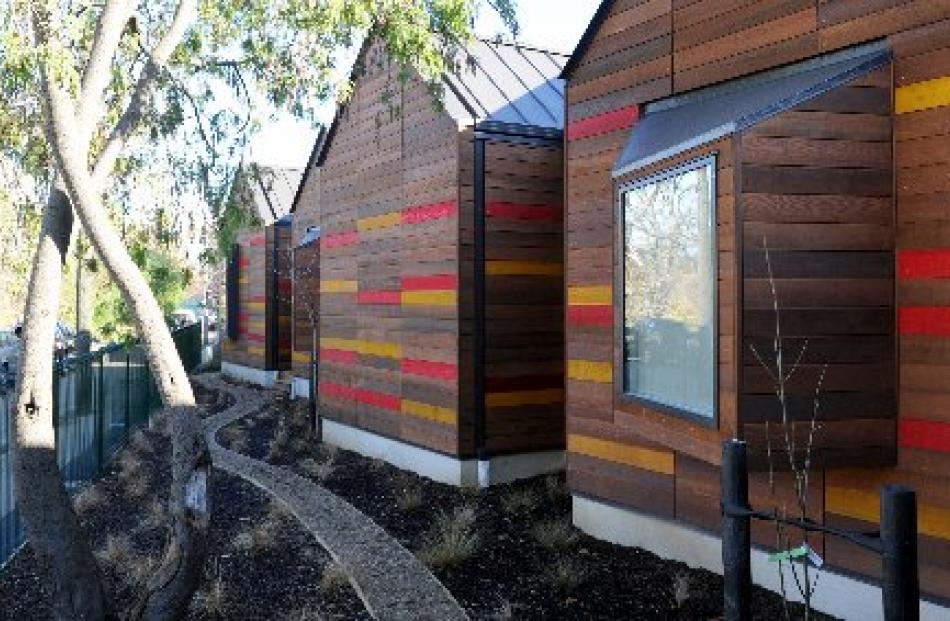 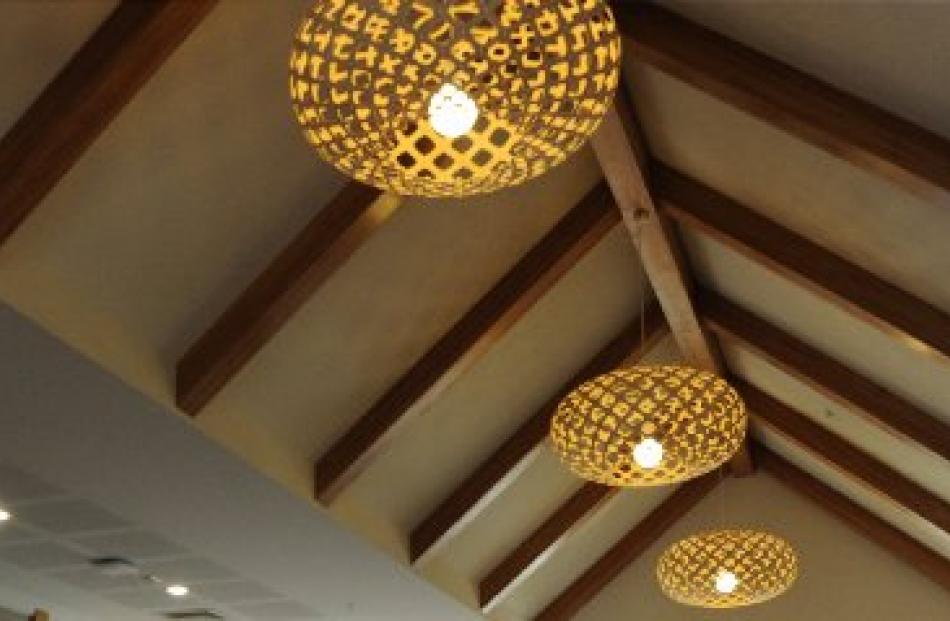 The bilingual centre has a pitched ceiling reminiscent of a meeting house. 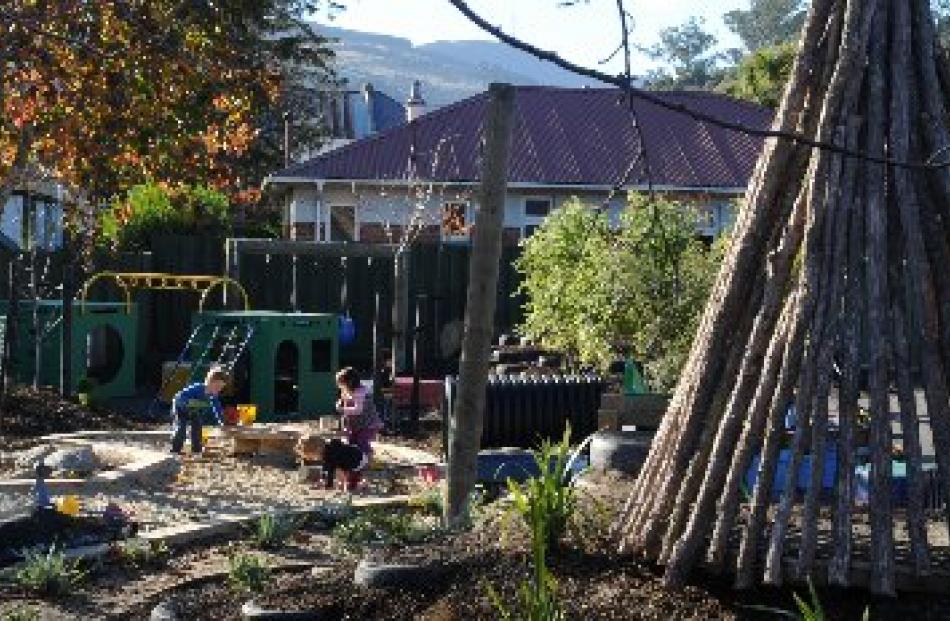 Manuka poles are used in teepees and forts in the outdoor play area that was developed around existing trees. 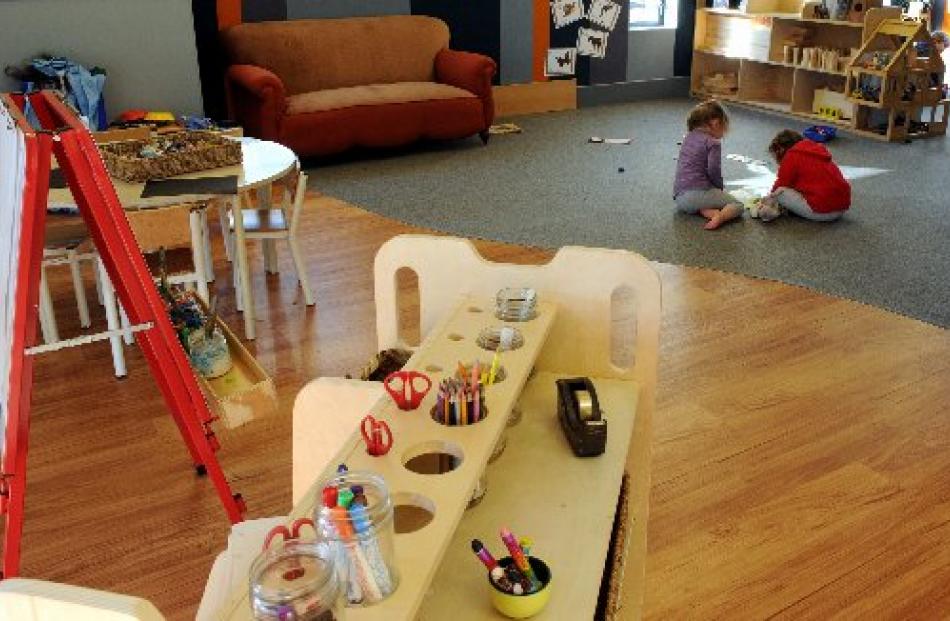 It looks like a typical row of student flats but behind the front doors, not everything is as it seems. Kim Dungey reports on a new development on the University of Otago campus.

The life cycle of a frog is depicted at child's eye level in the slats of the front desk.

The ''big boys'' in the nursery are enjoying the extra space. Aged nearly 2, they happily run from one end of the room to the other while outside other children swing on tyres and fill buckets with sand.

Opened last month, the new University of Otago child-care centre, Te Pa, is based on the concept of a children's village in the centre of the campus, essentially a group of domestic buildings surrounding a garden.

Key to this was preserving the facades of a row of timbered bay villas on the Castle St site. Once used as flats, then as music practice rooms and postgraduate study space, the Edwardian villas were among 11 buildings on the site that were dismantled to make way for the centre.

However, once repaired, the facades of the villas were returned to their original position opposite Selwyn College.

Painted different colours, with glazed links set back from the street and individual gardens, they still look like five houses. But behind the frontages is a single building housing the nurseries and the bilingual centre.

Leaving facades intact while building new structures behind is not without controversy. Critics call the practice facadism and claim it leaves behind only a veneer of history.

Others see it as a smart response to a city's changing needs, allowing regeneration while preserving historic streetscapes.

Architect Simon Parker, a director of Parker Warburton Team Architects, says retaining the facades, scale and proportion of the villas was a way to ensure a link with the past, while creating a modern child-care facility.

Their unique character was recognised in the university's 2010 campus master plan and because they were domestic in scale and not institutional, a child-care centre was identified as an appropriate use.

As part of the $6.3 million project, the original double-hung windows, weatherboards and latticework were all retained.

''Preserving the facades does add slightly to the cost, but is worthwhile to retain our unique heritage and adds significantly to the character of the buildings and the streetscape.''

The proportions of the villas and the rhythm they establish on the street also influenced the design of the entirely new, cedar-clad buildings on the site, Parker adds.

Backing on to Montgomery Ave, these buildings accommodate the older children (aged 2-5) and help enclose the outdoor play area. Able to be seen and accessed from all the buildings, the playground makes use of natural materials like logs, rocks and wood rather than brightly-coloured plastic equipment.

To hide, build and travel through, change and dig rather than climbing on static structures''.

Ten months in construction, the 1300sq m centre replaces premises in Great King St and caters for an extra 54 children, whose parents are staff or students at the university.

The facility is licensed for 140 but the children are divided into groups of 16-20 and each area has its own character, partly because of how groups interpret the curriculum but also because each space is decorated slightly differently.

The bilingual centre, for example, is reminiscent of a Maori meeting house with a pitched ceiling with a ridge beam and rafters. Its name, Te Parekereke o Te Ki, refers to the place in a garden reserved for seedlings.

There is a sense of fun, too, from the front desk with its illustrations depicting the life cycles of frogs and moths, to the bright pops of colour on the exterior of the new buildings and a covered walkway which has chain links instead of downpipes so the children can see water trickling down from the roof.

As well as play spaces, sleep rooms and a private room for breast-feeding, there are areas in which to park buggies, prepare bottles, store food and do laundry.

Parker says the buildings were also designed so there are plenty of opportunities for parents to interact and form networks.

The centre has wireless internet, double glazing, underfloor heating provided by a woodchip boiler, and high levels of insulation and sound-proofing.

Facilities for the nearly 40 staff include an adults-only area where teachers can use computers for their planning and assessments, and a staff meeting room. In the past, if more than three staff were attending a meeting, they had to use the university library.

Julie Buis, head teacher in the infant and toddler centre, says the arrangement of the buildings and extensive use of glass mean children and staff are able to be in small groups but feel they are part of a bigger community.

Lloyd-Jones agrees, saying the children are still exploring but enjoying the new environment: ''They've been motivated and excited by the whole experience''.