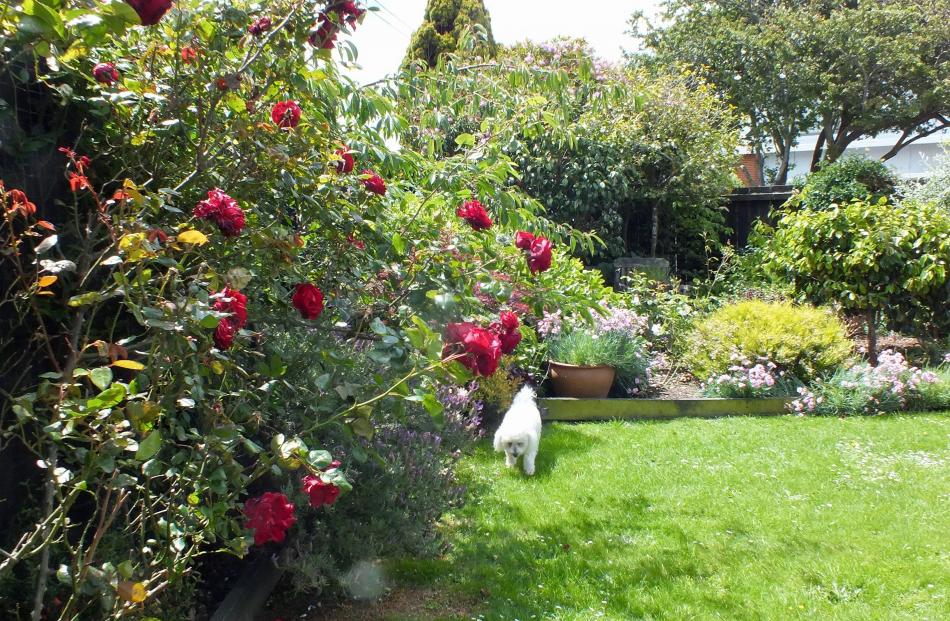 Climbing rose Dublin Bay was an appropriate gift to Bruce Hoskin, as he loved red. In the background, Curly the bijon bichon frise takes an interest in the lawn. 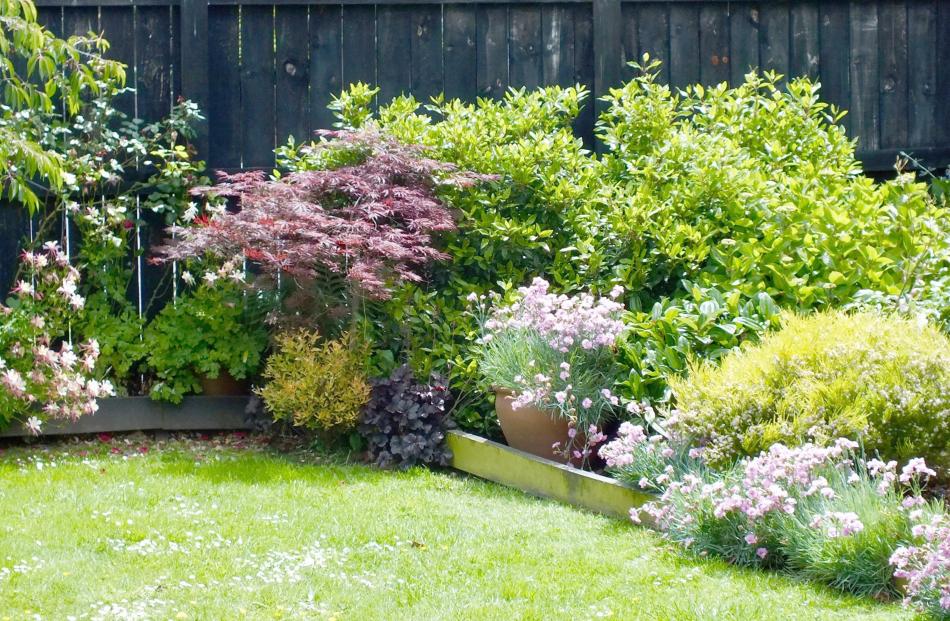 If doing the garden now, Thelma Hoskin would not have wooden edges to beds. 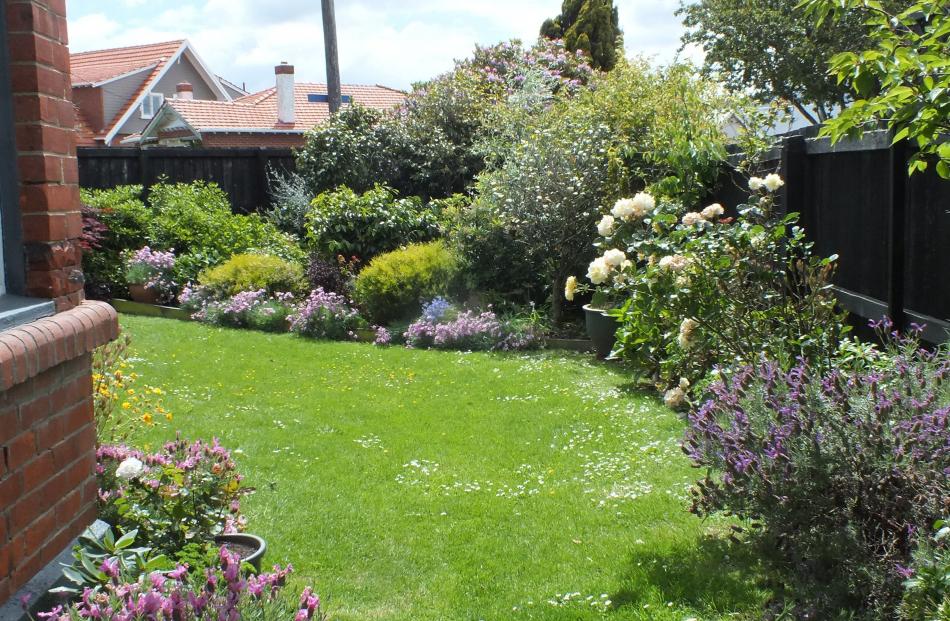 The Hoskin garden was created from scratch except for the yew (centre rear). 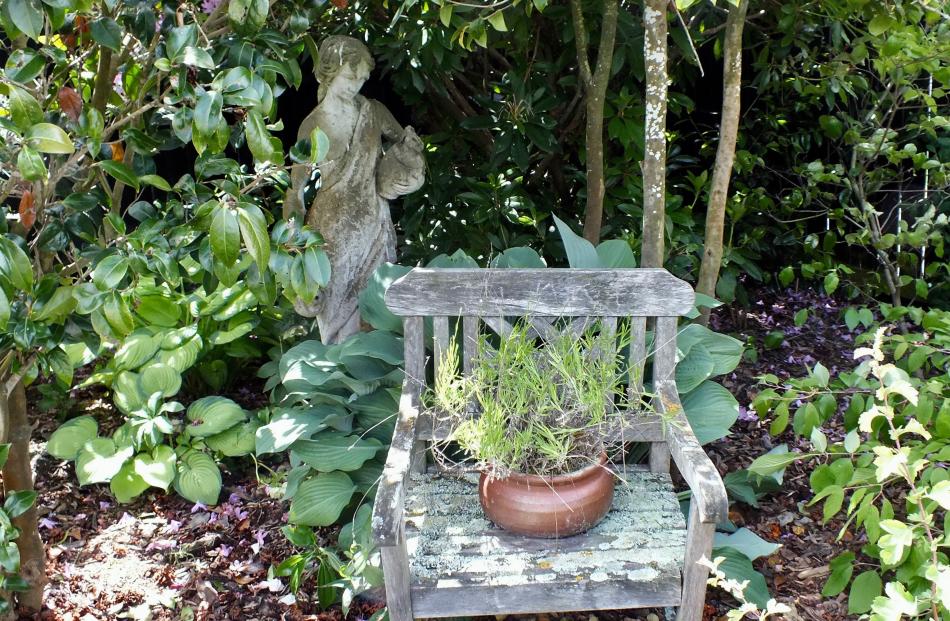 Thelma Hoskin has made good use of an old chair. 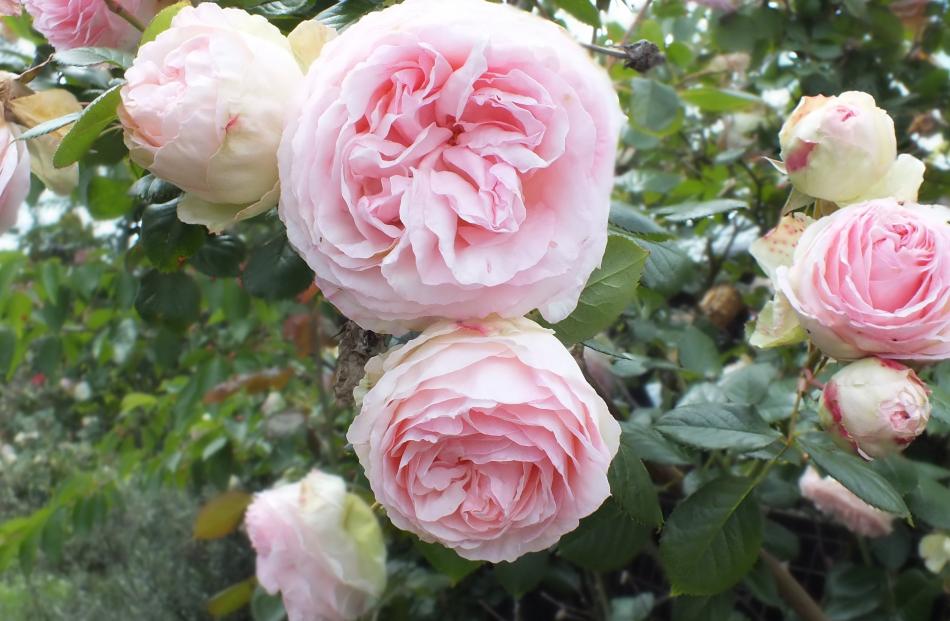 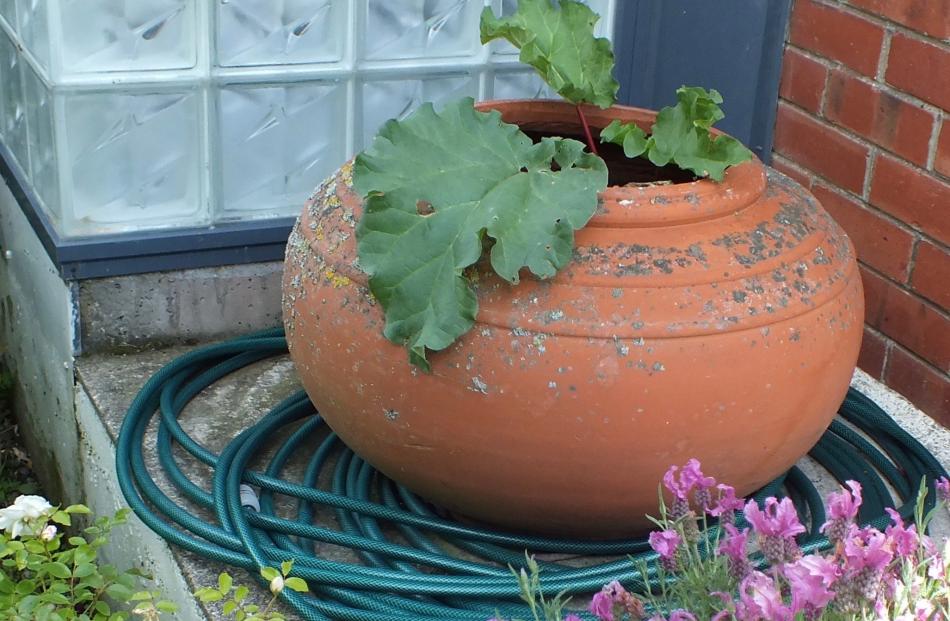 Rhubarb grows in a large pot.

"But I don’t have as many as I used to," she adds, recalling that she reduced the number by at least 60 when she and her husband, Bruce, moved from Waikouaiti to Dunedin.

Members of the Waikouaiti-Karitane Presbyterian Church presented Bruce — for many years parish treasurer — with the red climbing rose Dublin Bay when the couple left Waikouaiti.

"Someone must have known red was Bruce’s favourite colour," Thelma says.

The rose thrives in St Clair, along with other climbers on fences on two sides of the garden. Above them are flowering cherries, a frothy pink picture in spring. 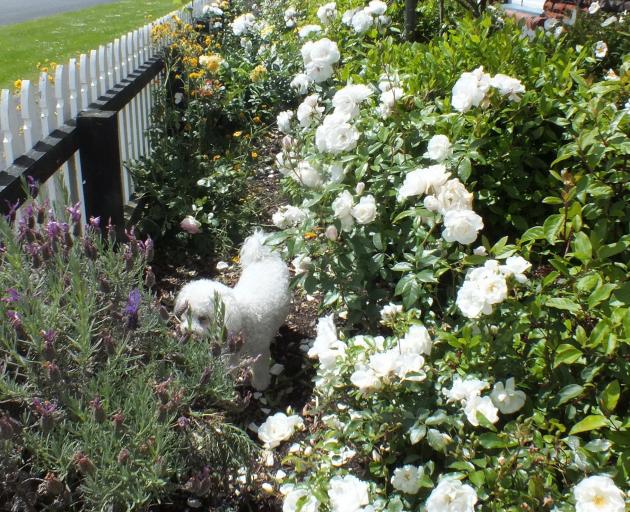 Removing a path and planting tightly has made the front strip easy to care for. PHOTOS: GILLIAN VINE
Of the other climbing roses, one is a splendid pale pink, while others are creamy white and yellow, so everyone’s preferred colour is here, not just Bruce’s.

Shrub roses complement the climbers. Austin roses are favourites, among them the less common, purple-red Young Lycidas, which is strongly perfumed.

Then there is clove-scented pink dianthus edging the main bed and lavender in pink, as well as the more usual purple. Long-lasting colour comes from well-chosen foliage: burgundy in a small maple and in heuchera, silver in a weeping pear and multicoloured hostas under the camellias.

"When we came here five years ago, there was nothing, only a couple of trees, so this garden is just five years old," Thelma says.

The property is on a corner, not the usual squared off section but one that comes to a sharp point. An existing pencil yew was left in the pointed corner, then rhododendrons and camellias used to bring the eye down to an old chair and a statue, then lower again to the border plantings.

Against the house is what Thelma laughingly calls her vegetable garden, a potted rhubarb and rosemary, coriander and other herbs. 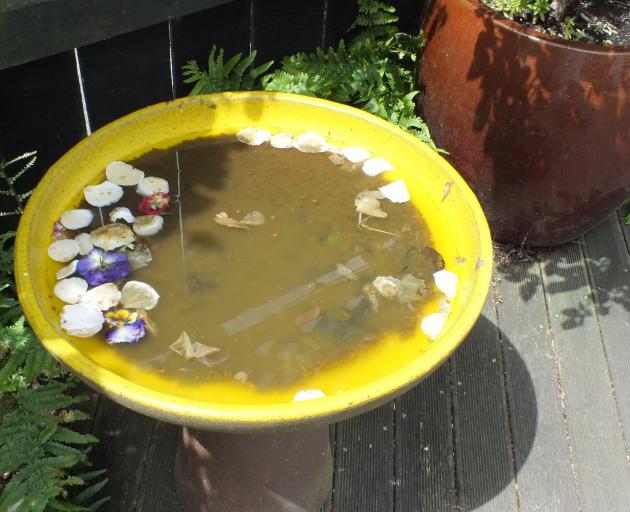 A bird bath collects fallen petals.
There’s even a water feature in this small garden, a bright yellow bird bath on which fallen rose petals float.

She loves propagating "from sticks", she says, pointing proudly to a small flowering cherry she grew from a twig, then lifting a piece of hydrangea from a glass of water to show how well it has rooted.

The section shape was something of a challenge but there is another, greater one. Thelma says wind is the enemy here: "It just roars through."

To beat the wind in front of the house, "toughies" were chosen, white Iceberg roses and purple lavender with a few yellow-flowered accents. These were planted after an old path was removed, making it an easy-care area.

Asked if she would do things differently if she was starting now, Thelma doesn’t hesitate, saying she would not have had the wooden edging to the back garden.

"And I would alter the shape and put in more rhododendrons [as] I love rhodies.

"And I’d plant lots of yellow pansies in the front — I’m fond of yellow."

Despite Thelma’s reservations, her garden is a charming creation.