Plants in unlikely places: City living a bit of a drain 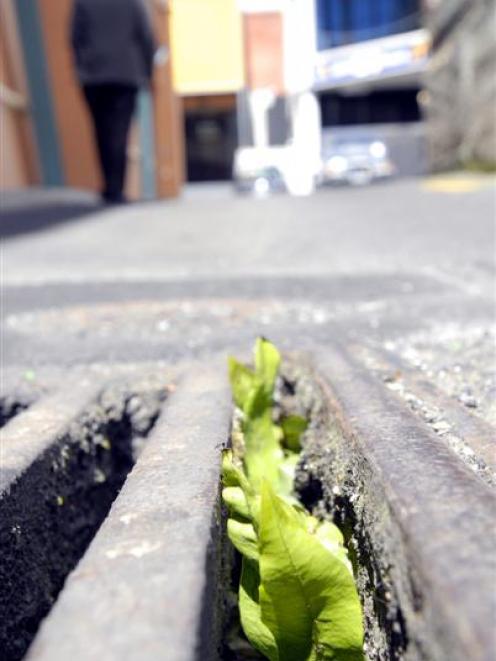 What is it?
Hound's tongue fern, also kowaowao or paraharaha, or Microsorum pustulatum.

Native to Australia and New Zealand, it was among the botanical specimens collected on Captain Cook's 1769 voyage.

In this instance, the hound's tongue is growing behind bars, in a drain on Albion Lane, not far from the back of McDonald's.

How unlikely is that?
The fern is common in woodland, but a casual survey throughout central Dunedin did not find hound's tongue growing in any other drain.

Still, a drain evidently can provide enough moisture and shade for hound's tongue, which is used to having trees above it.

So how did it get there?
Most probably wind-blown spores, possibly from established colonies in the Town Belt.

Ferns release thousands of these individual cells, and most of them amount to nothing.

But some survive long enough to find a moist situation where they can germinate and feed off their environment in order to grow.

University of Otago botanist John Steel said: "Spores are so small, they have very small chances of survival.

They need to find a hospitable environment relatively quickly."

Music may also have helped this particular plant along.

For reasons of its own, the nearby McDonald's regularly plays classical tunes by the likes of Tchaikovsky and Wagner through speakers outside the store's rear entrance.

A Korean study published in New Scientist magazine in August 2007 found the sound waves produced by classical music could increase the activity of certain plant genes associated with growth.

When was it spotted?
In February, although Mr Steel said, "It looks like it could have been growing there for a few years."

Is it still there?
Yes.