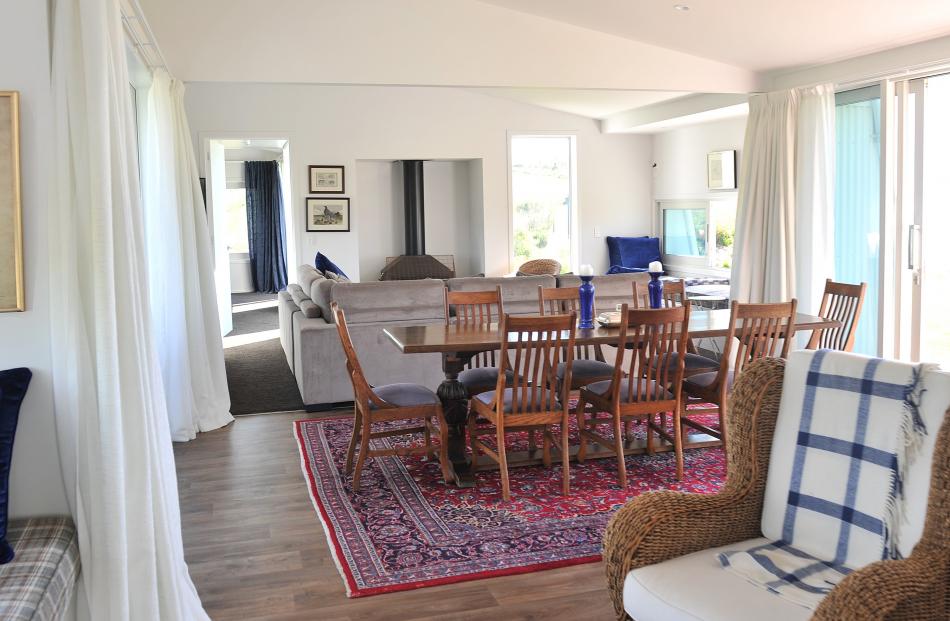 The interior has a relaxed feel, with blues and white reflecting the seaside location. PHOTOS: CHRISTINE O'CONNOR 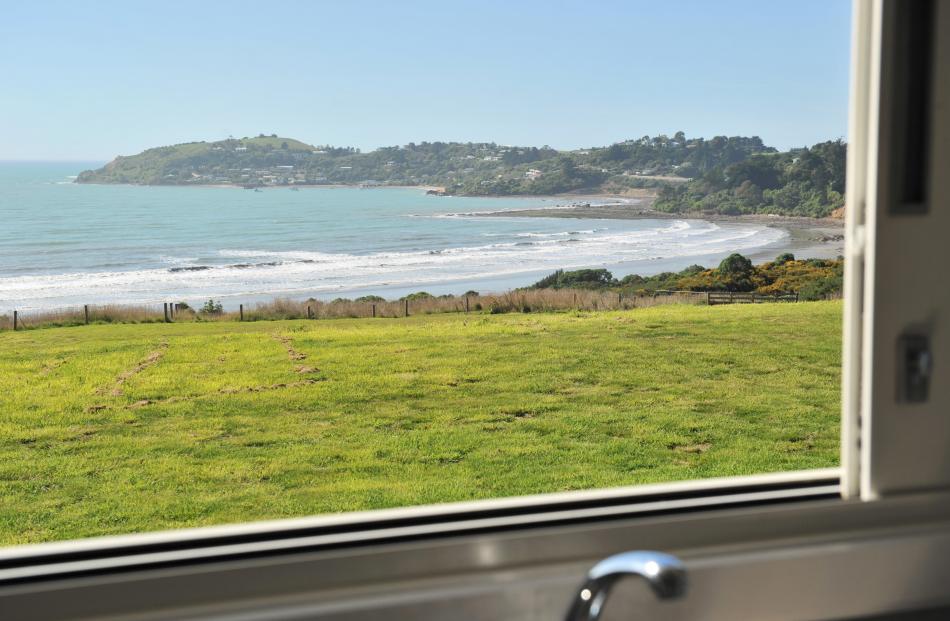 Moeraki township is seen through the kitchen window. 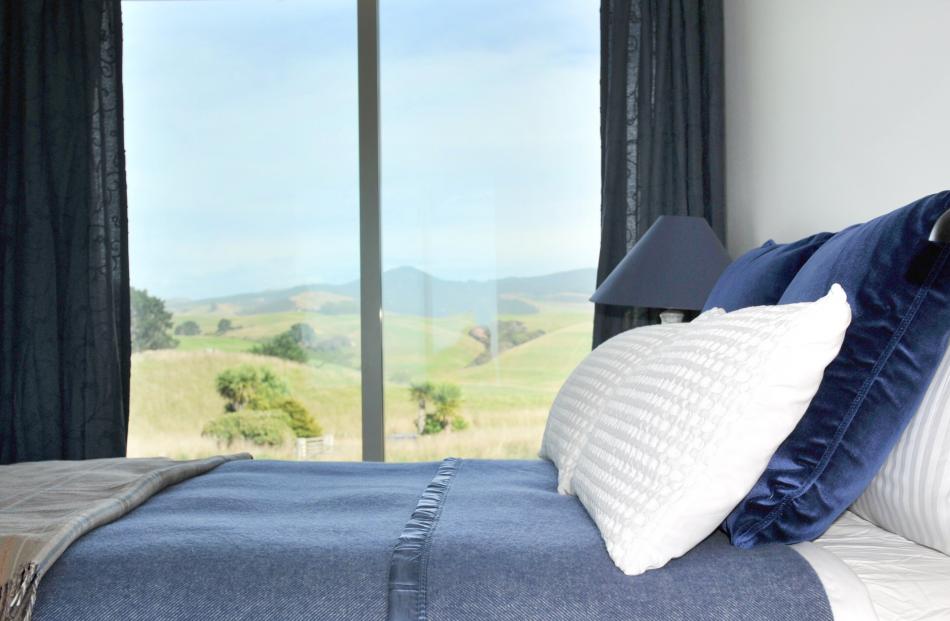 The main bedroom has rural views on one side and ocean views on the other. 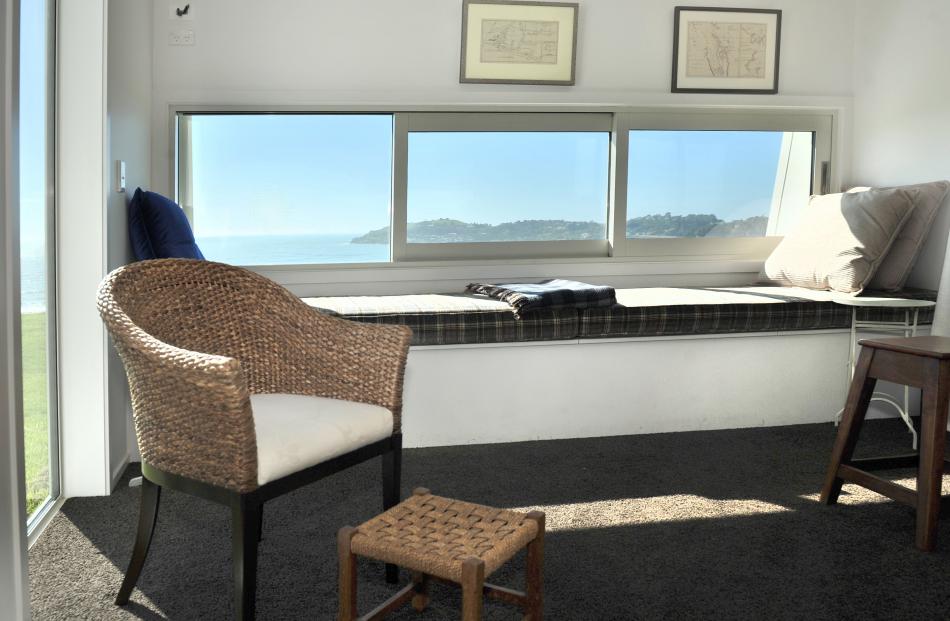 Window seats are an inviting place to linger. 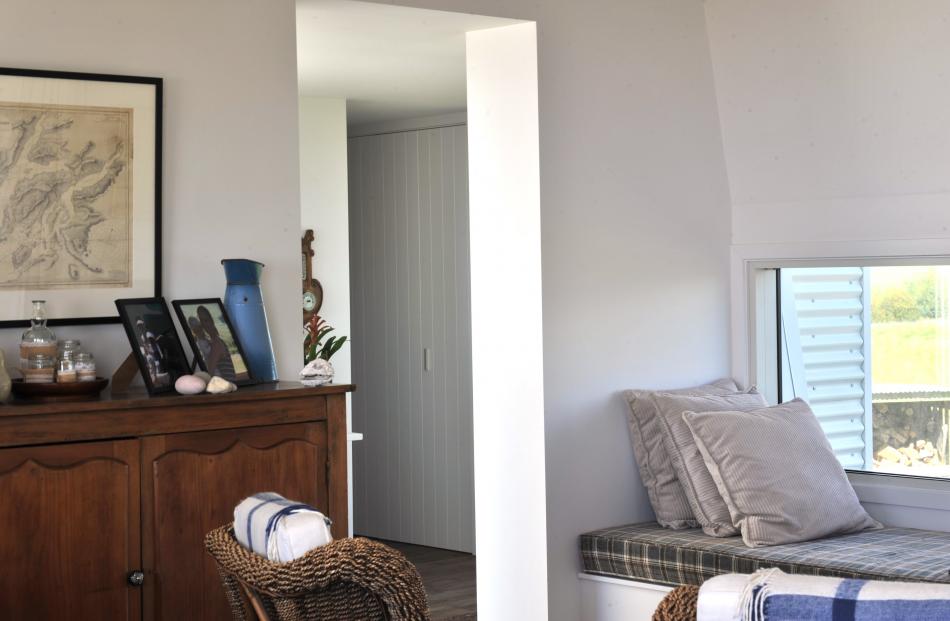 The living and dining area has the master suite at one end and the guest wing at the other.

After discovering this spectacular site several years ago, Paul and Julie Brown would regularly climb over the rustic gate and picnic on the brow of the hill, trying to imagine the lucky person who owned it.

This house is built across its Moeraki site to capitalise on the views. The exterior is painted a soft grey that is close to white.PHOTOS: CHRISTINE O’CONNOR

The Ashburton couple often travelled south to visit their son at university, breaking their journey on the bare block of land just south of the famed Moeraki boulders. Despite the "sold'' sign on the farm gate, there was no sign of activity.

Then one day, two years after they had first visited, Mrs Brown sensed that something had changed.

"It was a mixture of hope and certainty, but primarily instinct,'' she says. "The land was palpably unloved.''

A call revealed the land had been put back on the market only 10 minutes earlier. The estate agent was in Moeraki conducting an auction and urged them to stay where they were.

"The international buyer hadn't been able to meet the criteria for buying coastal land,'' she explains. "We bought it on the spot.''

When it came to who would design their holiday home, there was no question it would be Mrs Brown's cousin, award-winning Auckland architect Ken Crosson, whose own family bach featured on George Clarke's Amazing Spaces.

"Because he's a rural boy living in a cosmopolitan city and designing on the world stage, he brings a lot to the table in terms of design. He's also an overt family man. Coming from the same beliefs, it was an easy union.'' 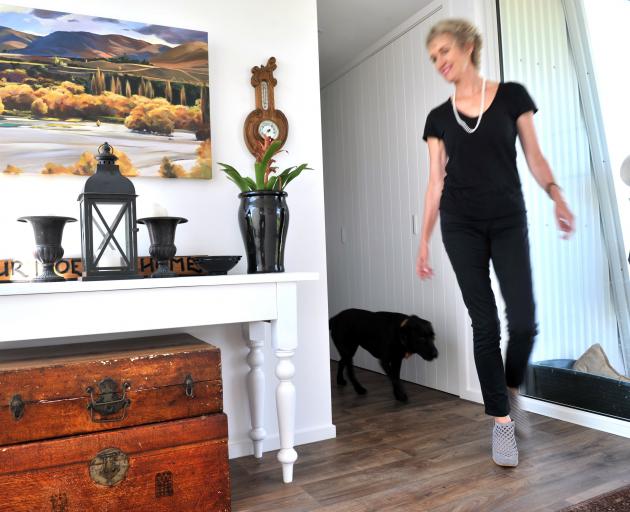 Eve follows Julie Brown through the entrance. The painting is by Sue Currie. The old camphor chests store spare hats and gloves.

The construction fell to their Ashburton friend, Alastair McIntosh.

Capitalising on the views meant building over the width of the section.

The home's narrow footprint allows the Browns to appreciate both the coastal views at the front and the rural views at the back and to always find a sheltered spot to sit outside.

Crosson says because the house was sitting across the site, they wanted to break it up a little and decided on a modular-type building.

Originally, it was to be made off site; those plans later changed but the "rationality'' of its construction is obvious. The roof, walls and windows are all in sections and these relate to the spaces in behind: the guest wing at one end and the master suite at the other, separated by the open-plan living area.

With such expansive views, the temptation might have been to use glass everywhere. Instead, picture windows, some of them quite low, give different views of the sea and sky depending on where in the house a person is and whether they are sitting or standing. 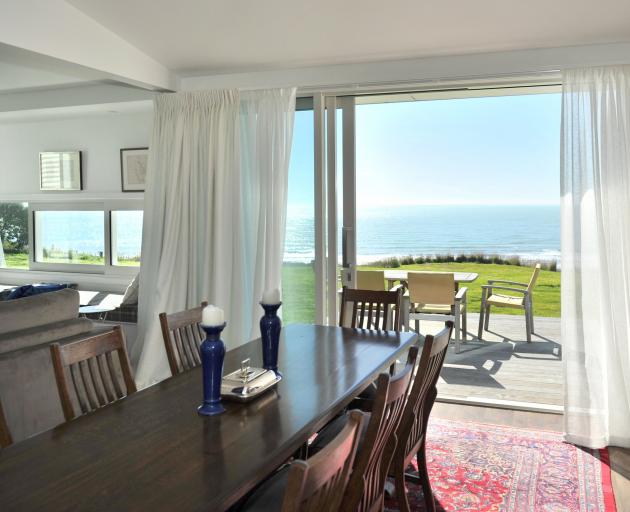 The dining area at the centre of the house leads on to a large deck.

Wall-to-wall glass can create a lack of intimacy and a lack of appreciation of views, Crosson says.

"Often, much like art, it's better to frame views for more focus and to make them more memorable.''

"What we've done is select positions for the windows which we think are the most appropriate for the spaces. So in the living room, it's a bit more intimate. In the middle of the house, where we've got the dining space and connections forward and aft, they're floor to ceiling. In the bedrooms, they're also floor to ceiling but in a portion of the room rather than all the way across. It still gives plenty of connection to the view ... but it's a bit more subtle.''

Bedrooms and living areas each have their own small deck, recessed into the building envelope for shelter from the wind and the summer sun. The dining room has a larger deck floating above the landscape. 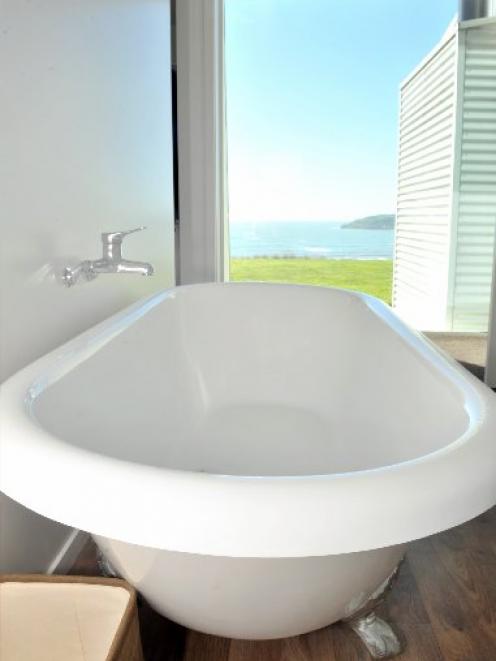 The bath in the en suite is perfectly positioned for the view.

Modest in form and scale, the home is reminiscent of a crib, and the corrugate material on the exterior, a nod to its rural location.

The Browns chose the pale exterior colour because they wanted the "freshness'' of white inside and out.

The Moeraki area has a long history of land instability, meaning the house had to sit on a designated building platform and more than 80 piles driven 2m into the ground.

Complicated design and engineering elements cannot necessarily be seen but added to the complexity of the four-month build, Mr McIntosh says. The unusual angles meant he had to be particularly careful with waterproofing and much of the wall framing was made like trusses with nail plates because bracing could not be achieved with wall board or ply.

Mrs Brown says the home resonates with the new lives she and her husband have created now their sons are adults. The setting is "wonderfully conducive'' to her work as a ghost writer and an ideal base for Mr Brown travelling with his work as a dairy stock consultant.

Outside, hawks silently swoop overhead, searching for rabbits, and plovers can be found in the grass. Wanting to protect their 4ha of rural coastal land, the couple have planted wind-tolerant species such as cabbage trees, ngaio, pittosporum and coprosma.

With views like this there's no need for a fancy kitchen. The secondhand cabinets cost only $500.

Beach access makes swimming in the sea easy. They also take their fishing boat out and kayak up and down the coast, sometimes accompanied by dolphins.

A radical departure from their classical 1920s Ashburton home and their historic beach cottage in North Canterbury, the distinctive property was always going to attract attention and locals have not been afraid to speak their minds. One asked Mrs Brown if she owned the "weird white house on the hill''.

"In my view, that's a compliment,'' he says, laughing. "Everything that's a wee bit challenging provokes a reaction ... ''

"We're always striving for the best house or the most appropriate house and that comes with a challenge.''