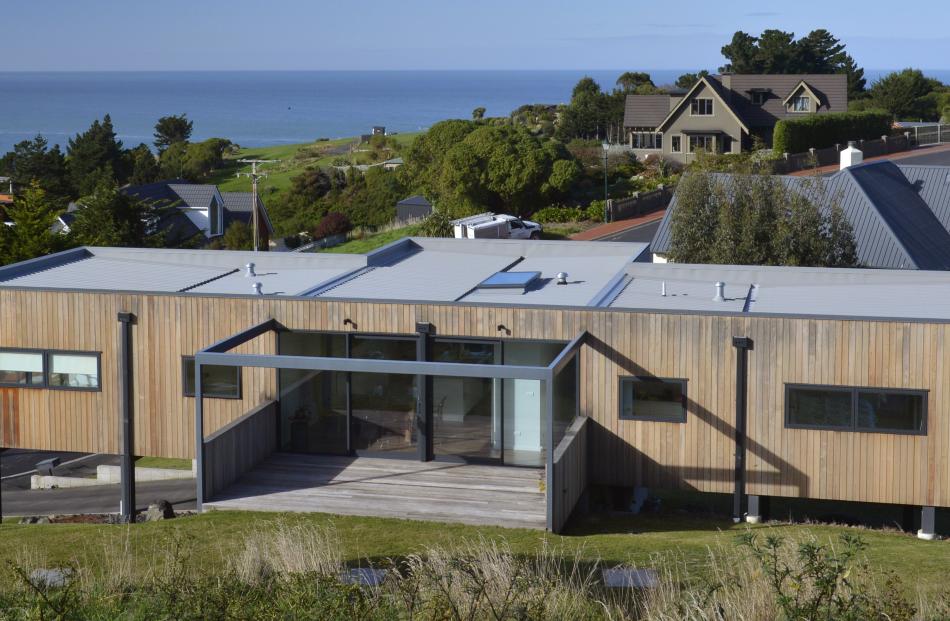 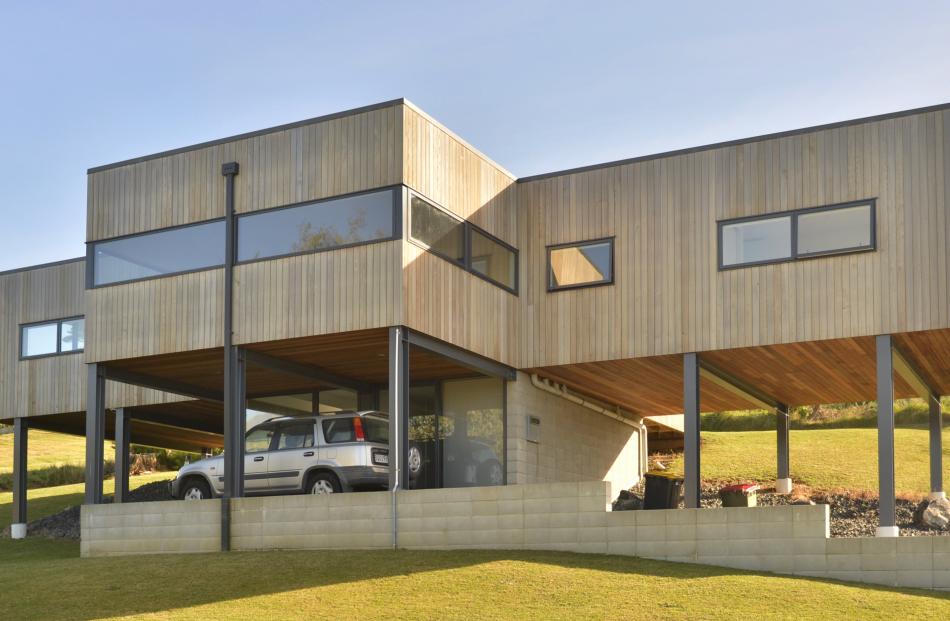 The home was designed by Gary Todd and built by Stevenson and Williams.

The wooden base for the dining table reflects the waves outside while a lime green chair has a tall, leaf-like backrest reminiscent of a tropical tree. Both pieces are by Filipino industrial designer Kenneth Cobonpue. 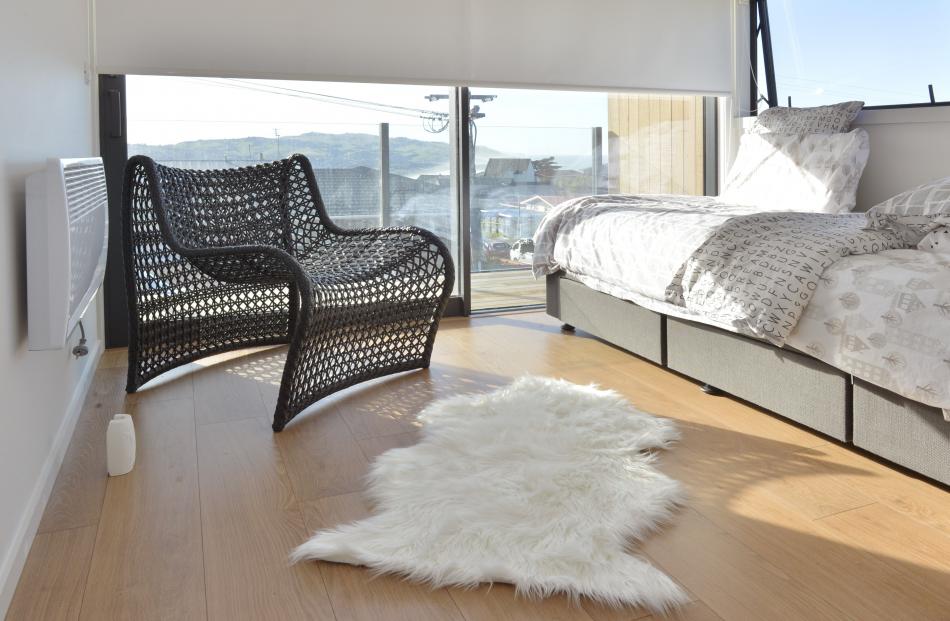 When the last of their children leaves home, the owners have the option of removing the non load-bearing wall between the two small child’s bedrooms and making them into one large area. 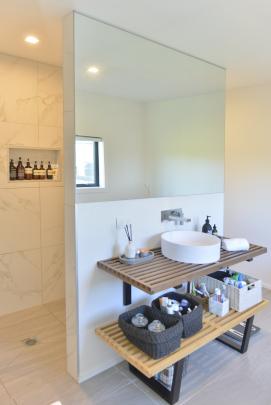 A round basin sits on spa-style slatted shelves in the en suite.

This cross-shaped house is the answer to the homeowners’ prayers. Kim Dungey reports.

Constraints force you to be creative, say the owners of this contemporary home built on a challenging site in St Clair.

Not only did the couple have a tight budget, they were also dealing with a steep, sloping section with underground water tanks that could not be built over. And while most people orientate their houses to the sun, in this case the best views were to the south. 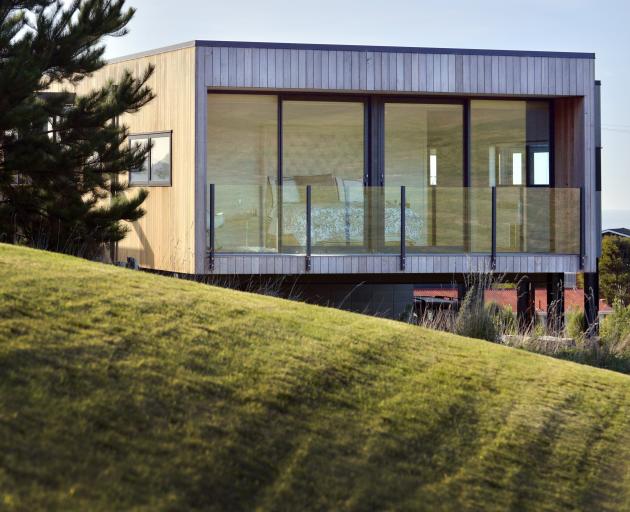 A pump house that supplied the nearby Highgrove subdivision had been removed but an easement allowed council staff to cross the land if needed until the tanks were decommissioned. The lids of the four containers are still visible in the lawn.

However, the couple saw potential in the piece of left-over land that no-one wanted. The small size and the easement meant it was not as expensive as some others. Best of all, there were sea views on one side and the green knolls of the St Clair golf course on another.

New Zealand citizens who moved from the Philippines in 2005, the couple envisaged building a simple cantilevered "box'' with clean lines. Because they work long hours, it needed to be a "manageable'' size and easy to keep tidy.

Some suggested building on the flat land at the bottom of the section, which would have been the easiest option. Architect Gary Todd proposed orientating the house in a different direction and raising the upper level 4m above the ground on steel legs to gain the most desirable coastal views and to ensure privacy from neighbouring houses.

The open-plan living area in this Dunedin house has a green golf course on one side and ocean views on the other. A skylight in the kitchen draws light into the centre.

The couple could only imagine what the outlook from that height would be like. And the project was an act of faith in more ways than one.

Todd always met them before or after they had attended church and on the first occasion, the woman owner was wearing a wooden cross.

Knowing religion was a big part of their lives, he took this as symbolism for the house and designed it in the form of a wooden cross, floating on a concrete core: the living areas in the middle run south to north, with the main bedroom, dressing room and en suite to the west and the two children's bedrooms, laundry and family bathroom to the east. 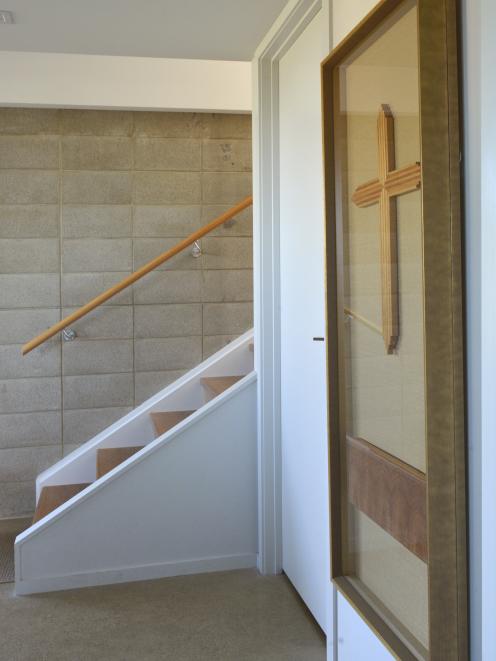 The owners’ faith is important to them and was the inspiration for their architect designing their house in the shape of a cross.

The size of the house was tailored to suit the budget. At ground level, rather than go to the expense of adding a garage or a series of rooms, they opted for an entrance lobby, study and storage. The 160 sq m of floor space on the upper level has only one small corridor and no wasted space. It was also based on a series of 3m by 3m squares to suit the standard size of most building materials.

One point of discussion was the cedar cladding; the couple were initially concerned it would look too rustic, but are pleased with the end result.

The other was the windows. Floor-to-ceiling glass in the living areas would have offered no privacy. Instead, Todd convinced them to frame the best views with long, narrow windows that cut out most of the road and most of the neighbours' houses below.

One of them says sitting there before work with a coffee, waiting for the sun to rise and the sky to change colour, is a favourite part of his daily routine.

Wooden floors flow on to timber decks, creating an indoor-outdoor connection. The deck off the main bedroom overlooks the fifth hole of the golf course, while the one off the dining area will eventually have louvres added above to make it more of an outdoor room. 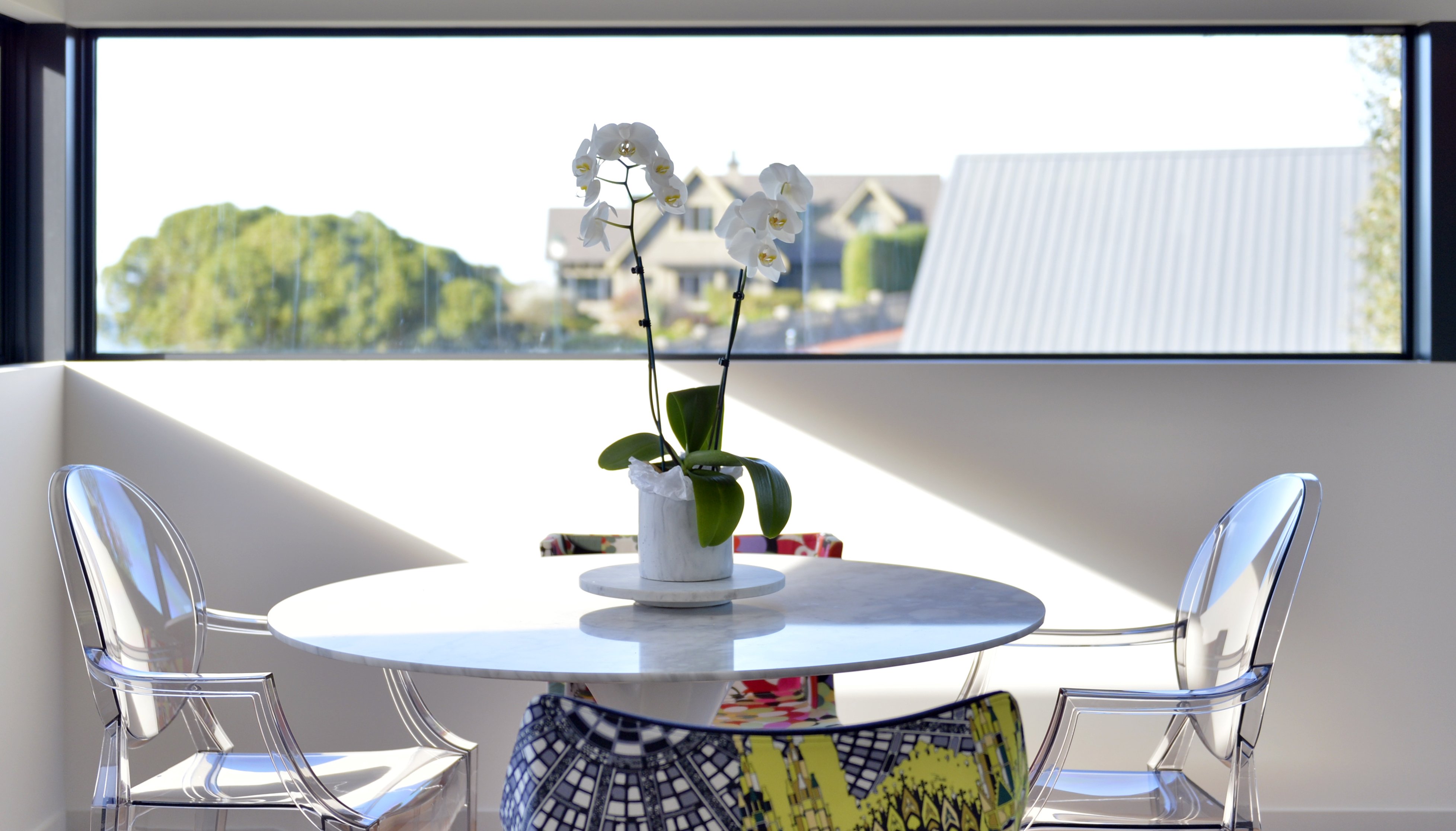 All the windows are 80cm deep, a measurement the owners arrived at after sitting in the shell of the house during its construction and working out a size that would balance views with privacy.

White walls and full-height doors and kitchen cabinets help create the clean, streamlined interior the couple wanted. They also pared back their possessions, allowing them to showcase their favourite pieces.

The furniture is a mix of budget and high-end items: drawers in the living area and dressing room are from flat pack specialists Ikea, while the "wave'' dining table that captures the undulation of the ocean in its sculptural wooden base is by Filipino industrial designer Kenneth Cobonpue.

Transparent pieces, chosen to make the space look bigger, include Philippe Starck's Louis "ghost'' chairs, which were bought two at a time in sales.

Asked for advice for would-be builders, the couple say it is important to work with people who know what they are doing and to build relationships with them: "It's not just a job ... It's neat to get to know the people who are building your house.''

They also recommend having a contingency fund, saying cost overruns are inevitable. Their reserves proved useful when they discovered the site was fill. A steel portal frame with concrete piles down to solid bearing was an economical alternative to a standard timber-piled foundation.

Despite that setback and the limitations of the section, they are more than happy with the end result and say they appreciate returning to a "nice'' house after working up to seven days a week in their business.

"It's just right for our family.'' 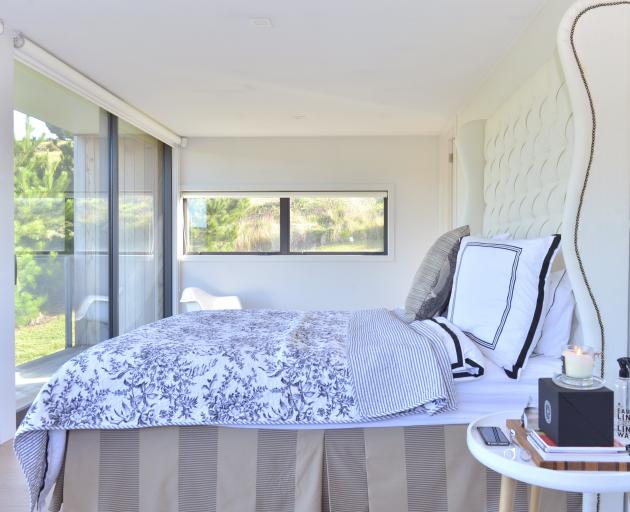 The main bedroom overlooks the St Clair golf course. The 2m-high upholstered bedhead was made by Dunedin’s Enterprise Upholstery.