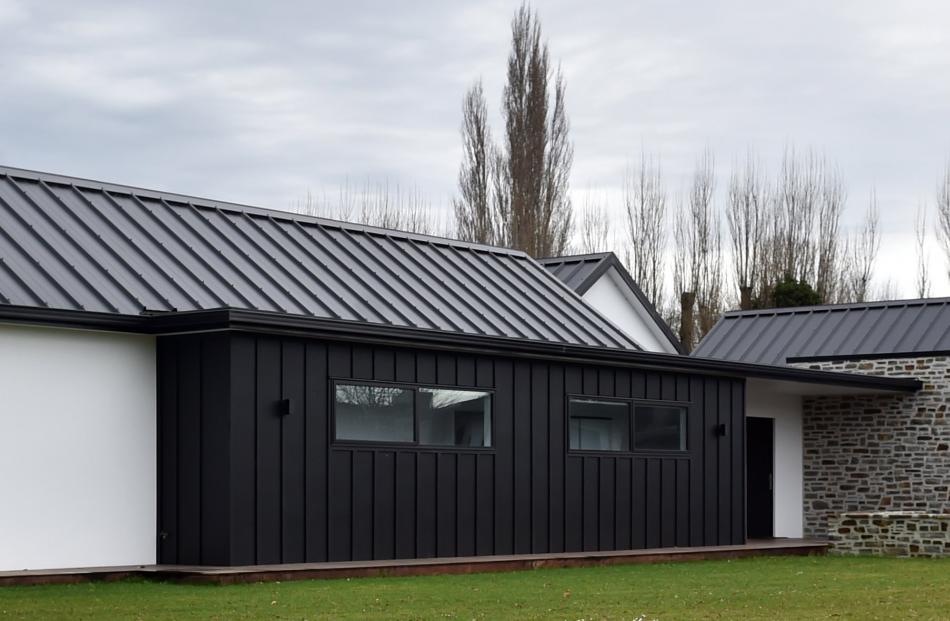 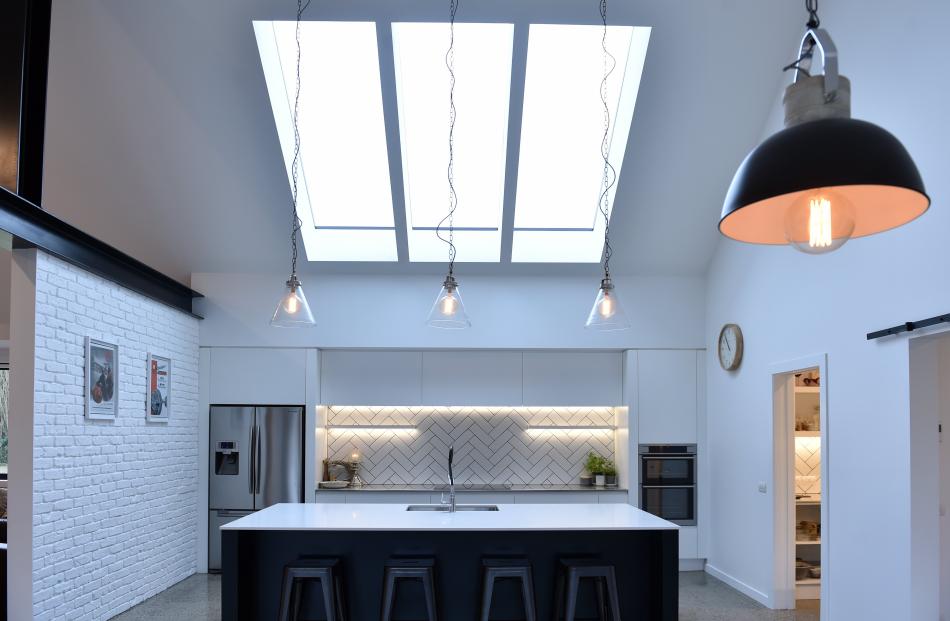 The window above the kitchen looks like three separate skylights but is one large piece of glass that was lifted into place with a crane. 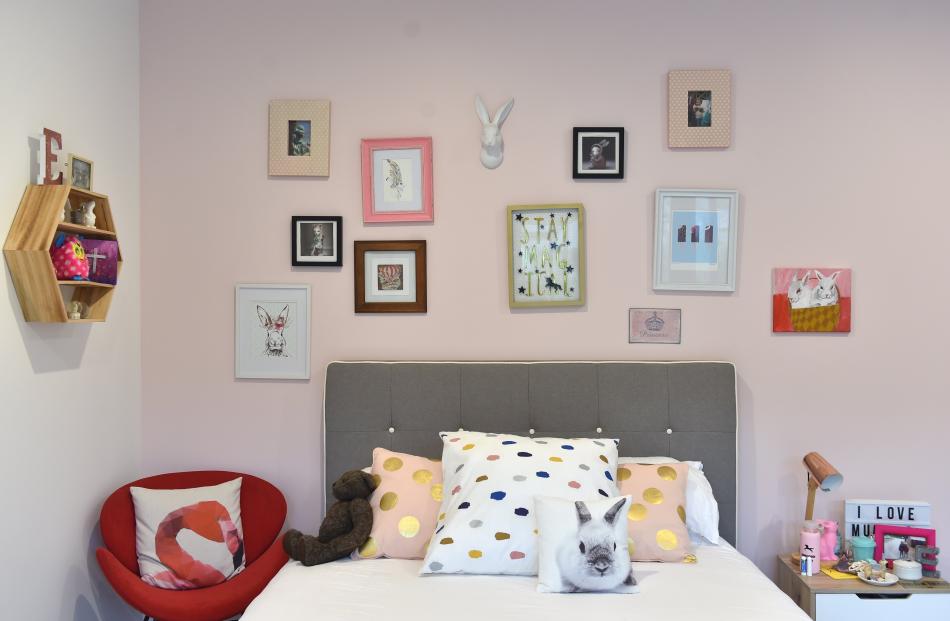 Artwork features prominently in 10-year-old Emilie’s room. Leisa Barron wanted the children to have a say in their bedrooms’ decor: ‘‘Liam wanted a black [feature] wall, Emilie picked pink and we chose the bedding together,’’ she says. 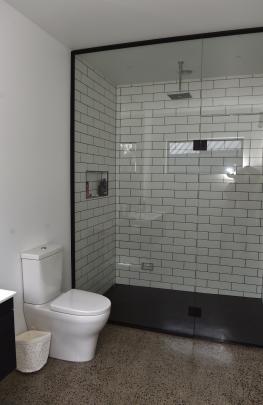 In the en suite bathroom, the edge of the shower glass is etched in black. 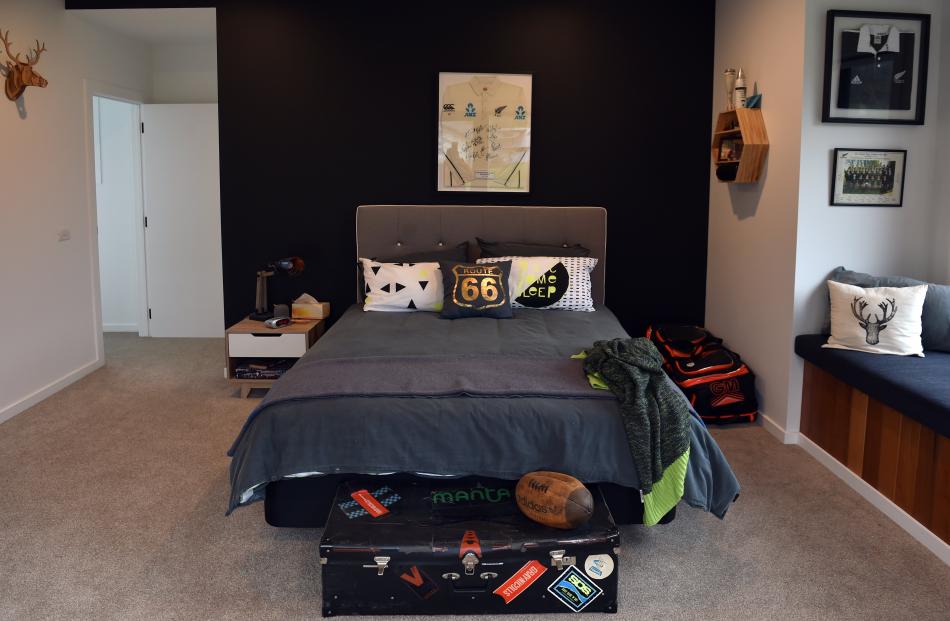 Sports-mad Liam (12) has a framed Black Caps jersey above his bed. His father’s New Zealand under-21 rugby jersey hangs nearby. 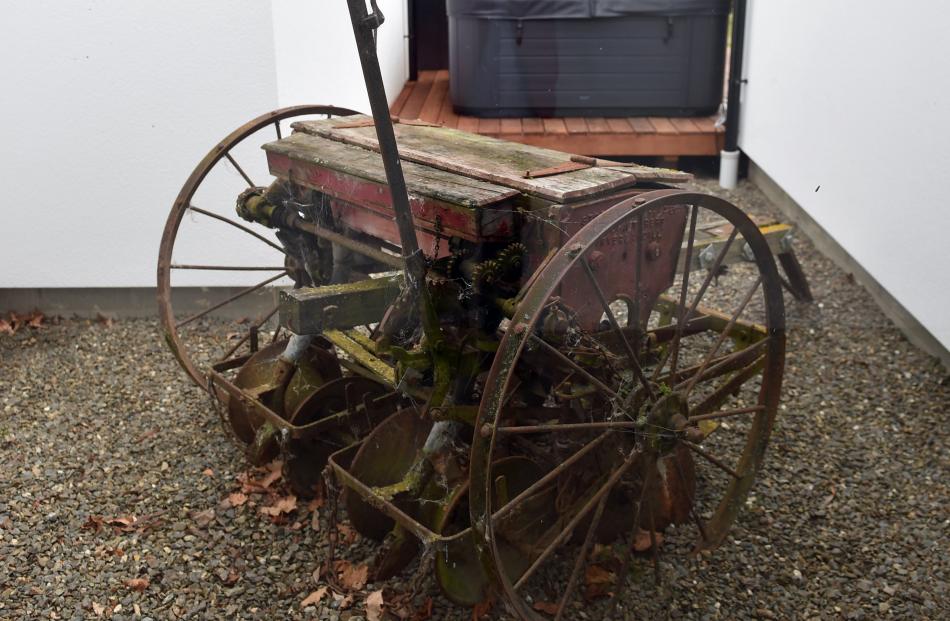 The plough and seeder which once belonged to Ash Barron's grandfather.

This stylish and practical home was the perfect fit for a young Outram family. Kim Dungey reports.

From the spacious floor plan to the heavy-duty beams and barn doors, everything in this house is on a large scale.

Six people helped carry in the biggest of the barn doors, a crane had to lift the 17.5m-long ridge beam into place and when owner Ash Barron took a trailer to collect the large kitchen skylight, the manufacturers simply laughed.

Ash and Leisa Barron love their spacious Outram home designed by Reece Warnock.PHOTOS: PETER MCINTOSH
The 370sq m home built by the self-employed builder for himself, wife Leisa and their children includes three bedrooms, three bathrooms and an office with living areas under a cathedral ceiling that, at its apex, is 6m high.

Interesting materials, cosy nooks and a mix of modern and vintage pieces make the home feel inviting despite its size.

"I worried that with the high ceilings, it would be cold and echoey,'' says Mrs Barron, a registered nurse. "But it's such a nice warm home. It feels good.''

Designed by Reece Warnock, of Warnock Architecture, the property won the people's choice award in the recent Resene Otago-Southland Architectural Designers' Awards and was commended in the section for new homes over 300sq m.

It's the third Outram home the couple has built since returning from Europe, where Mr Barron played club rugby for three years. 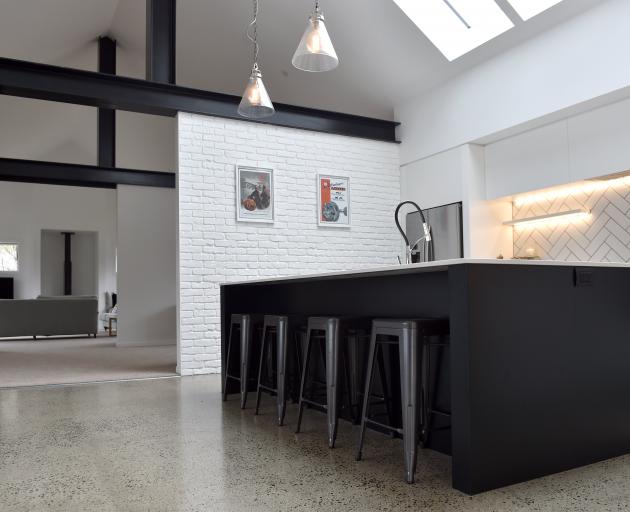 A polished concrete floor and imitation brick walls give the kitchen an industrial feel.

Now Otago Country coach, he had 97 games at first five-eighth for Southern, also playing for Southland, Manawatu and the New Zealand under-21 side before heading to France and Ireland in 2002.

When the couple returned, they had enough money to buy a section at the entrance to Outram and for Mr Barron, who took up a building apprenticeship at 28, to start building their first home at nights and weekends.

Their next house was just across the road from their present one, in a quiet cul-de-sac with views of Maungatua. At first, son Liam had the run of the eight other sections. As he and his sister, Emilie, got older, the couple began thinking of building again.

"We liked this area, but we wanted to do something different,'' Mrs Barron explains. 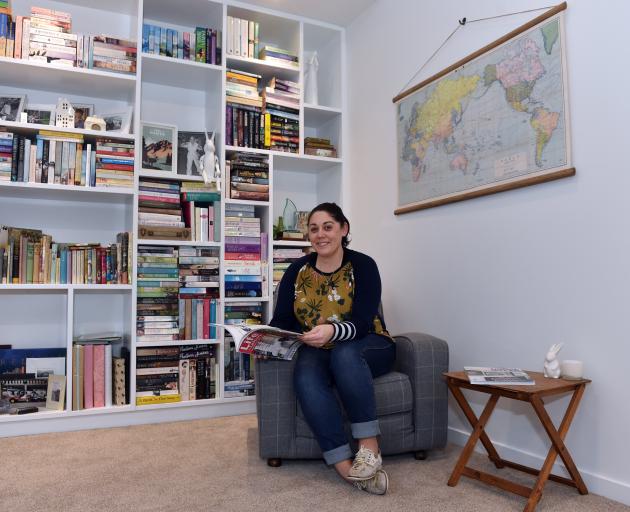 The library area with its built-in bookshelves and comfortable seating is Mrs Barron’s favourite part of the house.

"They say it takes three houses to get it right and this is the third one. We're not going to move again.''

While their previous house was clad in weatherboards, this time they wanted stone on the exterior, brick inside, exposed beams and plenty of natural light.

Located on a north-facing 3900sq m site, the home comprises three pavilions, with the children's wing at one end, the master suite and garage at the other and living areas between.

On the exterior, crisp plaster contrasts with rustic stone and black-painted board and batten. Inside, texture comes from polished concrete floors, a cedar feature wall and what looks like painted brick but is actually lightweight fibreglass wall panels.

A comfortable library adjoins the living area where beach stones from Hawea feature in concrete seats flanking the fireplace and remind the family of camping holidays in the town.

Liam (12) and Emilie (10), each have their own bedroom, walk-in wardrobe and bathroom, their parents looking ahead to the teenage years when the children will appreciate having their own space. 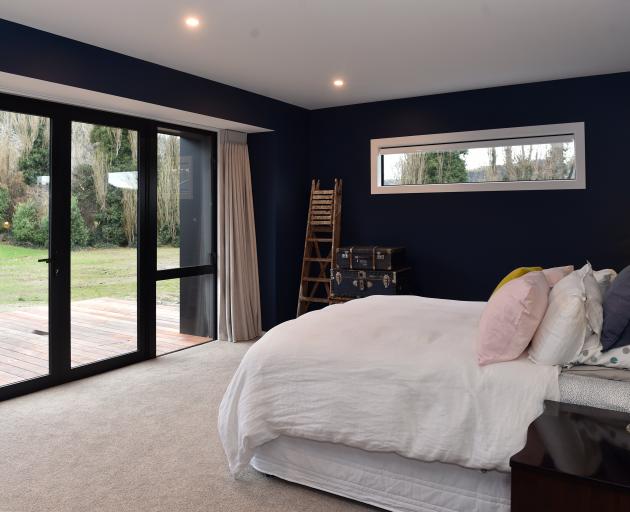 The master bedroom is painted midnight blue. ‘‘I wanted our room to be sort of masculine but still quite romantic,’’ Leisa Barron says.

Large picture windows in the hall allow views of internal courtyards and a century-old plough and seeder which once belonged to Mr Barron's grandfather.

Radiators, underfloor heating and a wood-burner keep the house warm.

Most rooms open on to the deck which has a black steel pergola overhead; adding electric louvres and an outdoor fireplace are on the "to do'' list this summer.

A separate one-bedroom flat is often used by visiting relatives. It was also where the family lived while Mr Barron built the house. With two other homes on the go and a construction company to run, the project took more than a year.

"We had a dog, a rabbit and two kids in the granny flat,'' he recalls. "It was a building site and the kids had nowhere to play.''

Mrs Barron says the 40sq m space, with attached garage, was "very cosy'' but living there was better than moving around rental properties as they had previously done.

"We did a lot of trips away, just to get out of it, but it was fine. We knew the bigger picture was a nice new house, so it was worth it.''