Thinking outside the hive 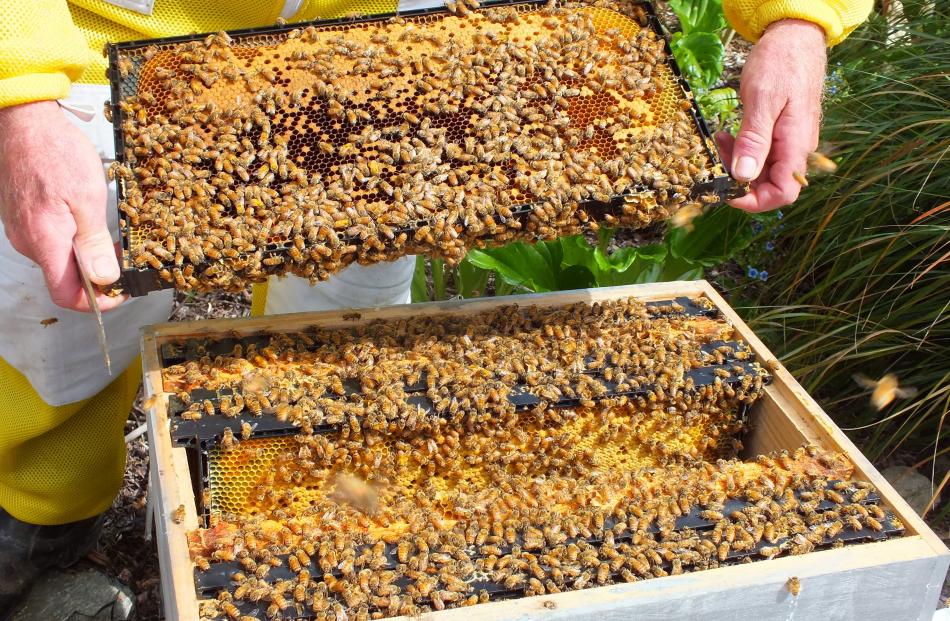 Each hive contains several frames on which honey is made. Photos: Gillian Vine 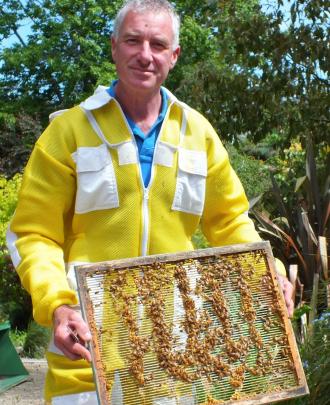 Murray Rixon says his yellow suit is more bee-friendly that the traditional white. 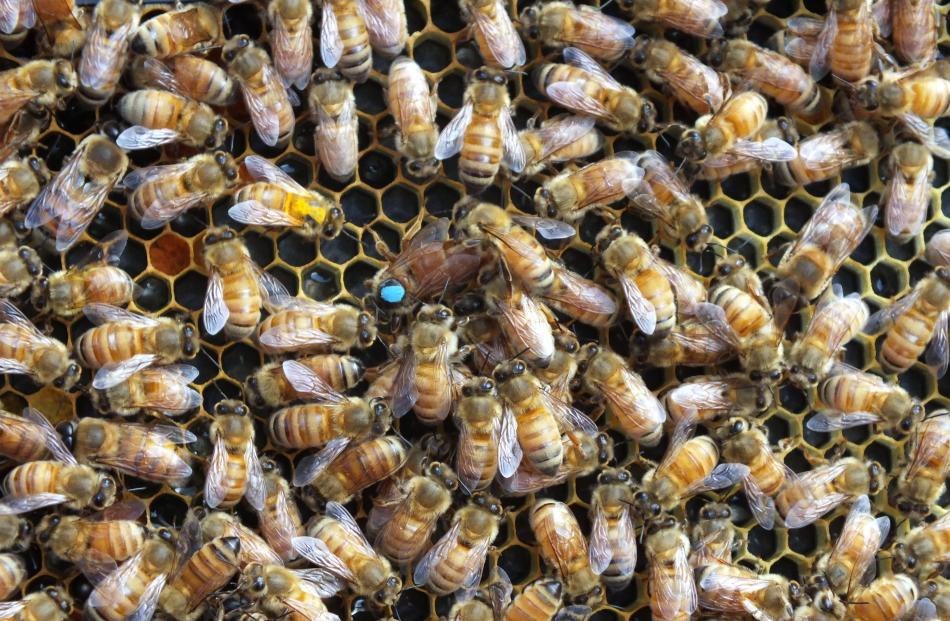 A queen (marked with a blue dot) surrounded by worker bees and drones. 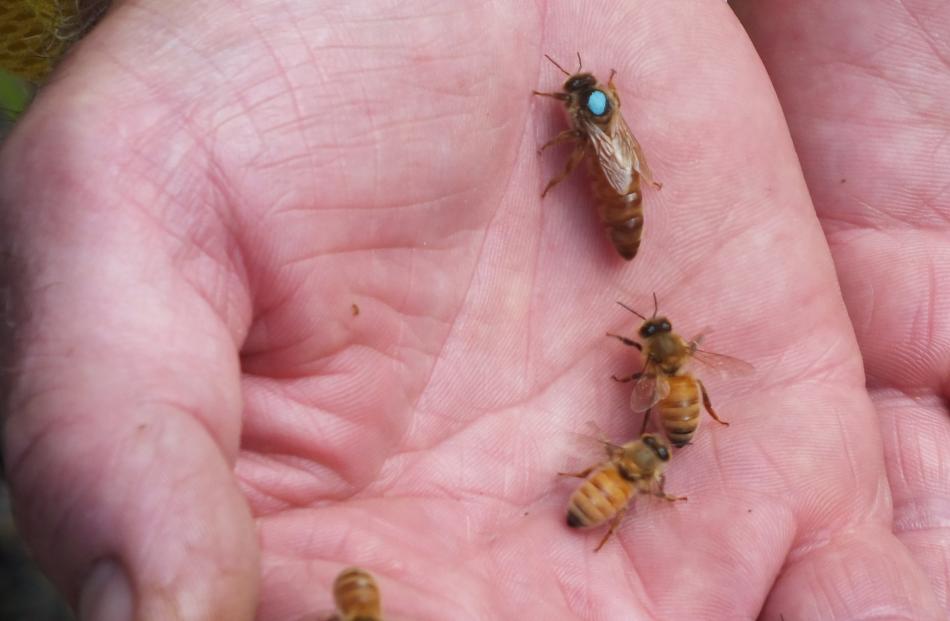 Resting on Murray Rixon's hand, a queen bee is identified by the blue dot.

Gillian Vine encounters a honey of an idea for gardeners.

With honey costing from about $18 to more than $50 a kg in Dunedin supermarkets, the notion of having a beehive in the garden is extremely appealing.

Alas, it sounds like hard work, what with gathering knowledge, buying equipment and having time to do it right.

It is possible, though, to have your own hive without the stress of caring for the bees, which is where beekeepers Murray and Heidi Rixon come in.

"Several years ago, Murray had his own pet beehive on our quarter acre in Mosgiel," Heidi explains.

"Friends asked, `Is that legal? We'd like to have one in our garden'." 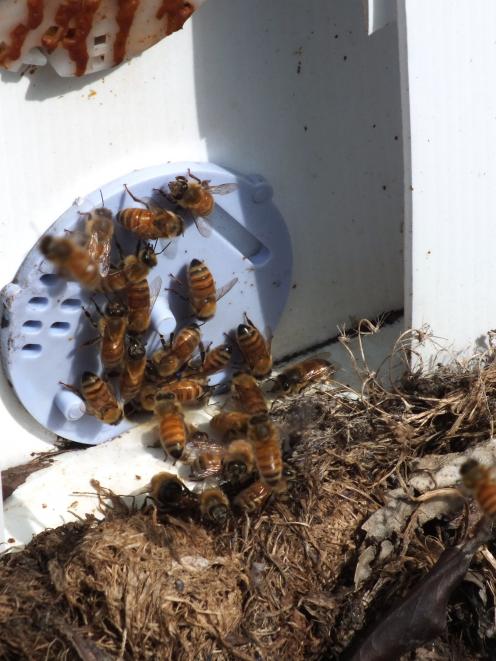 Bees head into a hive. Photos: Gillian Vine
That was the beginning of Rentahive, the Rixons' company which rents hives to urban gardeners, those on lifestyle blocks and farmers.

The beauty of it is that, for $430 a year, Rentahive supplies all the equipment from hives to clothing and does the work, including honey extraction, with people as involved "as much or as little as they want".

"What we offer is a fully managed hive service," Murray says.

That involves checking hives every two or three weeks from spring to early summer, harvesting the honey and supplying pottles from your own hive. At the end, each renter gets 12kg of honey, regardless of whether their bees' production has been high or low. In a bad year, a top-up to 12kg is made from an agreed source.

It's not just the appeal of serving one's own honey that attracts people to the service.

Some want bees to pollinate fruit trees, other families feel it is important for children to learn where food comes from and some just want to do their bit for bees.

"We breed our own queens, which are a nice golden brown."

Surplus queens are sold to commercial beekeepers and hobbyists.

When they dress for hive work, he and Heidi wear coloured bee suits, apparently more bee-friendly than the traditional white. Murray wears yellow and Heidi deep pink but red is out, as bees don't see that colour.

Bees are smart, able to keep the temperature inside their pitch-dark hive constant at 34degC, communicate with others about where to go for nectar - "They have a broad range of body language" - and are brilliant at finding their way home. That they will fly 6km or 7km for nectar if they cannot find it closer to the hive makes their direction-finding the more remarkable. 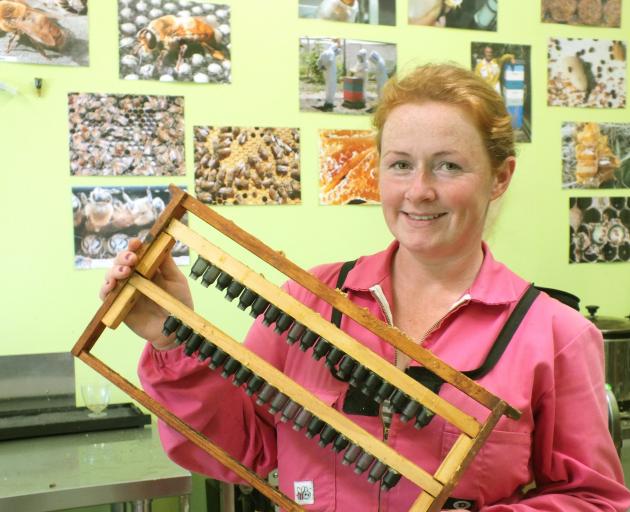 Heidi Rixon with the unit in which she breeds "nice golden brown" queen bees.
"All this with a brain the size of a pin head," Murray says admiringly.

At the centre of the beehive, with its 20,000 to 60,000 residents, is the queen, recognisable by a blue dot on her back. Unlike her drones and workers, a queen has no barb on her sting so, like a wasp, can sting repeatedly without dying. She uses this attribute to kill competing queens so each hive has just one.

However, a queen does not rule the hive, which is a co-operative venture "She's just a baby-making machine," Heidi says, adding that female worker bees need to be replaced, as they "burn themselves out", living for only about four months, unlike the queen.

"A queen will live up to four years but typically one and a-half years on average. I have an ancient queen; I think she must be approaching five years," Heidi says.

Asked about the dreaded varroa mite that killed so many bees in the past, Heidi says modern preventative measures keep it out of the hives, "rather like using a flea collar on your cat".

Before I get close to the bees as Murray opens a hive, he checks if I am allergic to bee stings. (I'm not despite numerous bee stings as a child.) He says the allergy known as anaphylaxis is "extremely rare", usually the result of multiple stings at once or being stung repeatedly over days or weeks. This is why beekeepers, their families and forestry workers are most at risk.

Anaphylaxis was known as beekeeper's wife syndrome, as wives and children were exposed to venom through exposure to venom on clothing in vehicles or washed with uncontaminated clothes.

For most of us, it's not a big deal, as bees sting only when threatened, "prepared to lay down their lives for the hive", as Murray puts it. One tip is not to brush off a bee that lands on you, as that can alarm it and cause it to sting.

Heidi has to remove one from my hair. It isn't caught, just so laden down with pollen, it has stopped on me for a rest on the way home.

Increasingly, the Rixons have moved into education, something that started when a 30-strong group from their children's Mosgiel school came to visit.

"We very quickly realised it was a fun thing for them. They were very excited," Murray says.

At the request of several schools around Dunedin, Rentahive has placed hives in school grounds.

"It teaches the kids to respect bees," Heidi says.

Beekeeping has become increasingly popular, with the number of New Zealand's hives nearing a million, up more than three-fold on 15 years ago.

The Rixons' scheme is helping promote beekeeping but the demand is such that Rentahive has a waiting list of people wanting hives on their patch. Those who have hives say it's worth the wait.