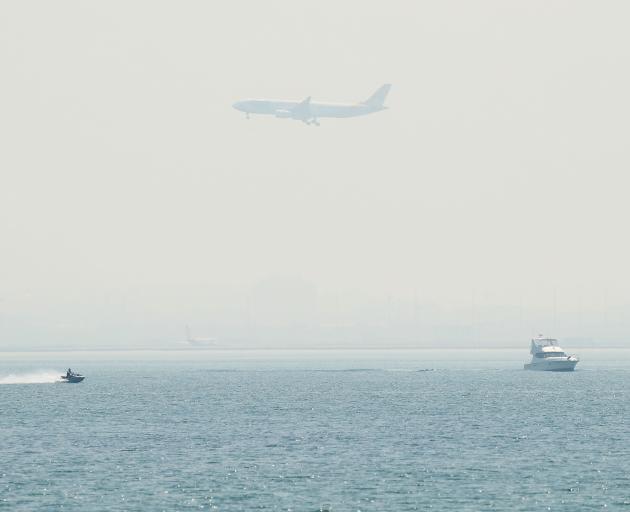 A plane flies over smoke-covered Botany Bay as it comes in to land at Sydney airport, while fires burn up and down the east coast of Australia. Photo: Getty Images
Recently, people in Sweden have chosen to fly less and take the train more. They have coined a new word, "flygskam", for the shame associated with flying and its climate impact. When Swedes want to visit other countries without flying, they have options. For New Zealanders, flying is the only practical option.

For many New Zealanders, the largest part of their carbon footprint is international travel. A round trip economy flight from Auckland to Los Angeles produces more than a tonne of carbon, and that’s not counting the non-carbon emissions that increase the climate impact of flying. An Aucklander taking one round trip to Los Angeles and another to London emits as much climate-warming pollution with those two flights as a typical New Zealander does in an entire year.

We only care about reducing emissions because we want to avoid the worst consequences of climate change, like extreme weather, rising sea levels, food and water shortages and mass extinctions. How is international aviation contributing to climate change?

Today, global aviation contributes about 3% of total carbon emissions, roughly the same as Germany. Non-carbon aviation emissions, including water vapor, aerosols and nitrous oxides, drive additional warming, probably doubling or tripling the climate impact of each flight. Efficiency gains for existing technology have already been realised for the most part. While there is hope that hybrid/electric planes will eventually replace conventional aircraft on short flights, for long-haul service, there is no alternative to high-carbon transport. Moreover, the 30-year lifespan of a typical passenger jet means that the existing fleet represents reality for the foreseeable future.

International travel, then, is a major cause of climate change today, and its impact is only going to increase. If we care about avoiding the worst consequences of climate change, then we need to reduce aviation emissions. And we have to act fast: according to the Intergovernmental Panel on Climate Change (IPCC), global greenhouse gas emissions must make a steep turn downward in 2020, fall by about half by 2030 and reach net zero by 2050.

We cannot wait for the UN agency responsible for international aviation, the International Civil Aviation Organisation (ICAO), to solve this problem: it is committing only to "carbon neutral growth", locking in existing emissions. Aviation’s share of the global carbon budget is expected to grow from about 3% today to as much as 25% by 2050.

Nor can we expect people to simply stop flying when it is often the cheapest and most convenient mode of transport. Nobody knows what proportion of people alive today have taken an international flight, but it is probably smaller than 20%, and even fewer people — frequent flyers, no more than 5% of everyone — are doing the bulk of today’s flying. These numbers mean that there is enormous unmet demand for flights: no wonder the ICAO predicts continued growth.

But we can still act at the local and national levels. New Zealand’s domestic flying is already part of our emissions trading system, and we have recently instituted an international visitor conservation and tourism levy that will raise the cost of flying here while funding sustainability projects. These are just first efforts: there is more that we can do.

When a Swede decides to take the train rather than fly, they reduce their emissions, lengthen their travel time and probably reduce their stress. If a New Zealander decides to forgo an international flight, they reduce their emissions, but now everything that would have happened on that overseas trip will not happen. Rather than lose those good things — international friendships, connections with relatives, business opportunities, education, tourism — we can make sure that we get maximum value for the flights that we do take.

For both professional and leisure travel, the default should be for longer, more high-value stays. We should encourage tourists to stay longer: if everyone doubled the length of their stay we could have the same tourist presence with half the aviation emissions. At work we can replace some in-person meetings with teleconferencing, and we can encourage our professional societies to decarbonise their activities. We need not feel flygskam if we are working towards a low-carbon future together.

Lisa Ellis is a professor of philosophy and politics at the University of Otago and a member of He Kaupapa Hononga: Otago's Climate Change Research Network. Each week in this column, one of a panel of writers addresses issues of sustainability.