All hands to the pump 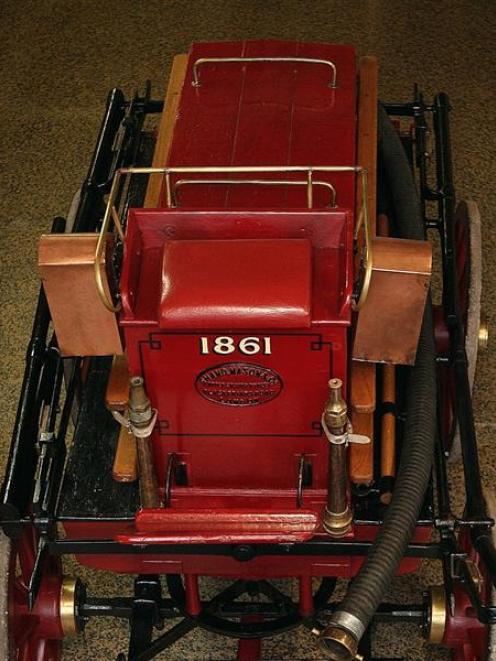 The "Pride of Dunedin" is housed at the Otago Settlers Museum. Photo from <i>ODT</i> files.
Two Dunedin institutions with intertwining histories celebrate their 150th anniversaries this year. One is the Otago Daily Times and the other is the Dunedin Fire Brigade. With the help of brigade historian John Ingram, Mark Price looks back at the danger fire posed in a young, wooden Dunedin and at how the brigade came into existence.

Fifty-seven-year-old Henry Monson left the thatched cottage he and his sons had built beside the Water of Leith and headed off to church.

While he was away, his cottage burned down and he lost everything he possessed - apart, it seems, from the clothes he was wearing and his violin.

Mr Monson joined the ranks of Dunedin's desperately poor until, eventually, he was appointed the settlement's first jailer. But that's another story.

The destruction of Mr Monson's cottage was significant in that it was the first recorded fire in Dunedin, a settlement constructed in those early days mainly from tussock, toetoe, rushes, timber, clay, mud, canvas and thatch.

And while the leader of the settlement, Captain William Cargill, had organised many things for the new settlement, a fire brigade was not one of them.

Two years after the Monson fire, a fire in the home of Dr Frederick Richardson sparked debate about how to reduce the fire risk.

In a letter to the editor of the newly established Otago Witness newspaper Dr Richardson wrote:"... should such a calamity occur in a town constructed almost entirely of timber as this is, it is impossible to calculate the extent of the mischief, or the ruin it would entail upon the sufferers."

The editor responded that Lyttelton had a fire brigade and that "something of the sort" might be done in Dunedin.

" ... or at least more attention might be given to the collecting of the rain water falling upon the roof of the houses - not only as a means of extinguishing fire, but as contributing to the saving of labour in carrying water for domestic purposes, and as adding to the comfort and cleanliness of the town."

One of the authors of Ready Aye Ready - 150 years of Fire Brigades in Dunedin 1861-2011, John Ingram says his research showed almost 90% of Dunedin at that time was made of wood or canvas.

"So a decent fire here spread for blocks. It wasn't just a small isolated thing."

Eventually, in 1860, plans were drawn up for the city's first fire station, to be sited prominently in the Exchange. 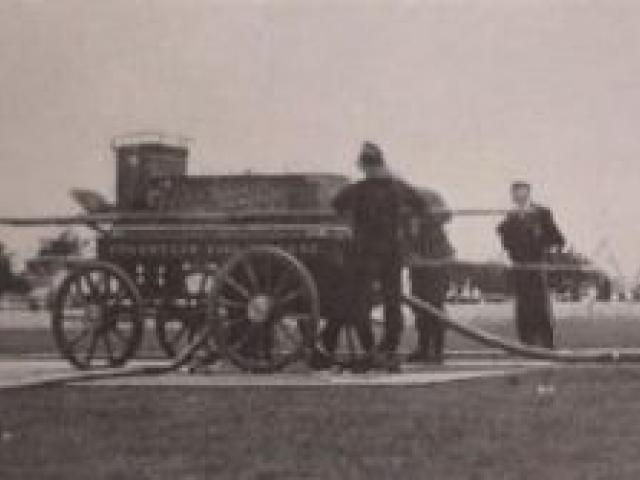 The 1862 arrival in Dunedin of the horse-drawn Shand Mason manual engine gave the town's fire-fighting force a major boost. It required 28 men to operate the "pumping poles" on either side to project two streams of water 12m into the air. Photo by the <i>Otago Witness.</i>

Mr Ingram says the Otago Provincial Council had refused to build offices for the Dunedin Town Board but had agreed to pay for a fire station.

So, the board put the fire station on the ground floor and "just happened to pop their offices on the top floor".

The Witness found the combination of pumps and town board business amusing.

" ... is their eloquence of such a fiery nature that the proximity of the fire engine is desirable?"

The first fire-engine - donated by the Liverpool and London Fire and Life Insurance Company and relying totally on manpower - was delivered early in 1861 and the first meeting of the Dunedin Volunteer Fire Brigade was held on February 20, 1861.

There were plenty of volunteers - mostly the owners of small businesses - and the following month they held their first practice.

Otago Witness: "The novelty of the bright scarlet uniform of the Brigade, and the passage of the Engine, drawn along the street at full speed, rather alarmed some of the Dunedinites, who thought something serious had happened.

"The firemen, however, without stopping to answer questions, pushed on to the Water of Leith, where they practised the use of the engine for an hour and a-half, and then returned to the engine-house, accompanied by an escort of enthusiastic juveniles.

"Great praise is due to those of our townsmen who have started this most useful institution."

But, the enthusiasm was short-lived.

In May 1861, Gabriel Read discovered gold near where Lawrence now stands and many of the brigade's volunteers deserted Dunedin for the goldfields.

Dunedin was booming and more vulnerable than ever to fire.

In December, 1861, fire broke out in a store or bakery near the office shared by the fortnightly Otago Witness and the Otago Daily Times, which was in only its second month of publication.

The high-speed practice of the brigade volunteers had impressed the newspapermen nine months earlier but now, when speed was really needed, there was a problem - the fire-engine was locked in the Town Hall and no-one knew where the key was.

The police had to break open the doors to get it out.

The ODT's editor then was Julius Vogel and the paper reported on December 2, 1861: "After some difficulty in obtaining it, the little fire-engine - the only one the town boasts of - was got out and fixed on the Bay Beach, and the hose connected on.

"Meanwhile the flames spread in such a manner that it became evident there was not much chance of saving the adjoining houses, whilst the safety of all the buildings between Stafford and Walker [now Carroll] streets seemed imperilled."

It was decided to "let the Witness go" and concentrate on saving the Queens Arms.

With the help of the engine and two chains of buckets, police, soldiers and civilians managed to save the pub.

But the Witness office and two large stores were "completely burnt down", a butcher's shop was destroyed and also, presumably, the bakery.

Using printing equipment offered by the proprietor of the Colonist, the ODT continued publishing with its editor calling for a public meeting to "take steps to produce an efficient fire-engine and Fire Brigade".

"Although it was a personal motivation at the time - having a lot of melted print left on the printing machines - I think it's rather significant both [the brigade and the paper] are celebrating their 150th in the same year and the ODT brought about the start of the second, more permanent brigade who weren't quite so gold-hungry as the first."

" ... it is worse than folly to consider (ostrich-like) that danger is avoided by hiding it from the view.

"The people of Dunedin should not lose a day in providing means for protection against fire."

A meeting was arranged but "owing to some unfortunate mistake" it was arranged for the same place and at the same time as a meeting to form a jockey club.

"After some confusion," the ODT reported, "the sporting portion of the meeting withdrew ..."

The chairman then called for business but " ... no-one seemed to know exactly what they came there for, and a scene of indescribable confusion ensued - everyone talking, proposing motions, and making amendments at once ..."

When "everyone was tired of shouting" a decision was made to have another meeting on another day.

The jockey club then went ahead with its meeting in an "orderly manner", in "strong contrast" to the proceedings of the fire brigade meeting.

But, wheels were in motion and on January 11, 1862, the editor was "exceedingly glad" to see a second, although small, fire-engine landed on the Dunedin jetty.

And, in August 1862 the second Dunedin Volunteer Fire Brigade was formed and fireman Robert Robertson was paid to look after the fire-fighting equipment and man the brigade's watchtower in upper Dowling St.

A major step forward was the arrival in November that year of the horse-drawn engine that came to be known as the "Pride of Dunedin".

Mr Ingram's book - which is still at the printer in Christchurch and might, or might not, be ready for the launch next weekend - details the many fire-fighting developments that have occurred since 1861.

And it recounts Dunedin's worst fire in terms of lives lost, which occurred in the early hours of September 8, 1879. Twelve people died when the three and four-storey Ross Buildings in the Octagon, where the Regent Theatre now stands, burned down.

There were three shops on the ground floor, including a cafe and theatre operated by Mr William Waters that had gained an "unsavoury" reputation.

Mr Ingram says police had threatened to close it because of complaints of young men "hooting, shouting and fighting".

The first floor was let to businessmen and the top floor contained 22 rooms rented to families.

Five of the rooms were taken up by Witness editor Robert Wilson and his wife and seven children.

"The entire complex was a warren of small rooms and branching passages incorporating different levels and serviced by only two narrow stairways".

The ODT carried accounts of the lucky escapes and heroic rescues.

"Above the noise, and shouting, and clanging of the bell could be heard the pitiful and heart-rending shrieks of women and men cut off from the only means of exit - the staircase, and it was indeed sorrowful to hear these piercing cries of terror, without any efficient means of rendering assistance."

Among the victims were Mr Wilson, his wife and four of their children.

The paper noted Mr Wilson had often expressed the opinion that a fire in the building would result in loss of life.

"He was but too true a prophet."

It also noted those who escaped with their lives had nothing but the clothes in which they stood and that little of any value was recovered from the ruins except for 6 in sovereigns.

Rubble from the fire was unearthed earlier this year during excavation of the Regent's orchestra pit.

Among items recovered were pieces of old bottles, segments of milk jugs and teacups, a clay pipe and a whole plate and saucer.

William Waters was later found by a jury in the Coroners Court to have wilfully set fire to the building but it considered he did not have any desire to cause loss of life.

Mr Ingram says the 150th anniversary celebrations will go ahead this coming weekend even though Dunedin fire-fighters are still engaged in the latest chapter of the brigade's history - helping with earthquake recovery work in Christchurch.