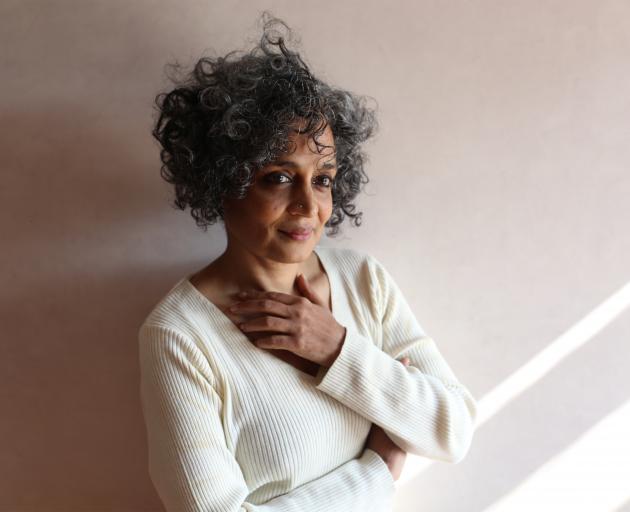 Writer Arundhati Roy. Photo: Mayank Austen Soofi
Arundhati Roy talks to Greg Bruce about her wild success and her despair at the state of her home country.

Since the publication of The God of Small Things, the novel that made Arundhati Roy rich and famous and won her 1997's Booker Prize, she's been smeared, criticised and criminally charged. She's been to court many, many times. She's been imprisoned once.

Her first court appearance came about when she was charged with "corrupting public morality" as the result of a scene in The God of Small Things, but many of her subsequent appearances have resulted from the stream of potent essays she has published in the intervening decades, attacking systems, leaders, power structures and corruption in India, where she was born, grew up and continues to live.

This torrent of literary outrage has now been collected in a 1000-page hardback called My Seditious Heart, presumably landing with an angry thud in the wastepaper baskets and skip bins of the secretaries and related intermediaries of India's leading power brokers.

I'm talking to her over Skype on the day it's released in India. "Is it fair to say you're an angry essayist?" I ask.

Still her best-known work, The God of Small Things was her first novel ("I just started playing tennis and I won Wimbledon") and it took 20 years for her to produce her second: The Ministry of Utmost Happiness. She had felt no pressure to write a second novel; for a long time she assumed she wouldn't. The significance of her first book meant she remained one of the world's most important literary voices.

When asked several years ago, in an interview with Random House, why she thought The God of Small Things had been so successful, she said it was a mystery. "I like it that way," she told them. "I have no thesis to offer."

Before books, she had written movies: two screenplays, one of which won a national award in 1988. She says the films were "What we used to call `lunatic fringe'." When she finished writing The God of Small Things, she thought, "Now I've written a lunatic book."

About its astonishing international success - reportedly more than eight million copies sold in 42 languages - and the resultant financial rewards, she says, "I couldn't even imagine anybody could make that kind of money from writing a book."

While at architecture school, she had written to one of her closest friends: "I'm completely broke. Please give me 2000 rupees ($NZ44) and when I'm rich I'll give you lots."

After The God of Small Things went ballistic, sales-wise, the friend said to her: "Roy, thank God we are rich."

Roy says now: "Everyone seems like they share it and own it, and that's right. It works to keep a lot of people afloat - not just me."

In 2015, she returned her national film award in protest at the actions of the recently elected Indian Government. The editorial she wrote in a national newspaper at the time gives a good sense of her feelings:

"I want to make it clear that I am not returning this award because I am `shocked' by what is being called the `growing intolerance' being fostered by the present Government. First of all, `intolerance' is the wrong word to use for the lynching, shooting, burning and mass murder of fellow human beings."

One of the longest pieces in My Seditious Heart, "The Greater Common Good", is about a giant dam project, a subject dull enough on its face to repel all reader interest, but over its 50 crushing pages Roy lays out a cruelly compelling story about the project's futility, its inability to deliver on its promises, its destruction (current and impending) of homes, communities, lives, hopes, dreams and the environment. By the end, you can feel the project's 3000 dams collapsing under the weight of their own pointlessness. Anyway, the project went ahead.

That angry essay was first published 20 years ago but on the day we spoke Roy picked up a current copy of the Indian Express newspaper and showed me an article detailing how, downstream from one of the project's two "mega-dams", the Narmada River, once 300m wide, is now down to 6m and is projected to dry up entirely by 2032. This means its power plant will no longer be able to produce any power. It hasn't produced any power since July last year.

Many thousands of people who lived near the river and whose lives depended on it have been displaced and driven away. Also, a large stretch of river, and almost everything in it, has died.

"It is just unbelievable," she says.

As a staunch critic of entrenched Indian interests and power structures, she has received more criticism and personal attack from her compatriots than might be considered normal for an internationally beloved novelist possessed of major international prizes and rare insight into the human condition.

She says: "You just keep your eye on the ball, as they say in cricket. So I just keep writing, don't get distracted by all that, just keep doing the work.

"Just by the laws of physics, you matter less than the work does."

But to many people, not least the powerful people she habitually criticises, she matters. She's been travelling a lot, she says, as a way of protecting herself: "It's like a solidarity between writers and readers," she says. "It's a shelter I live in."

I ask if she means that keeping her international profile up makes it less likely something will happen to her.

"No, not at all," she says. "That cuts both ways: so the stakes just get higher and higher. Much of the time it has happened to me that people will attack me or file court cases against me or summon me to appear at the criminal court only for the sheer thrill - just to be like: `OK, we can do this to her'. I've been dragged to court just so people can watch for their entertainment."

She says: "It's not at all funny and it's not a small game, but you just have to see it as a part of how this place works, how institutions are used, how thugs are used, how mobs are used, everything is used. You can't go there and think, `Oh, but I haven't broken the law', because it doesn't matter."

She will not be censored, self- or otherwise. "Let's say the minimum that I want to achieve is to leave a record," she says. "That is the minimum. At least that, if nothing else."

I ask if it felt like a curse for her to have been known as a novelist first, given her desire to hold power to account. She says no: "That is the greatest weapon anyone can have - the ability to write. That's what f***s them up! The ability to write and the fact that you can write and be read ... There is nothing - nothing - I would desire more than to be a novelist. Nothing. To be able to write what you think is the most beautiful gift you can ever be given."

I ask when she realised she was good at it. She says: "It's not about being good at it. When you find yourself able to close that gap between language and thought - your language and your thought - then the blood flows easily in your veins. It's like that. It's about your own feeling in your body. Any artist, I'm sure - any cricketer or any musician or any dancer - they can't be anything else, they can't do anything else. They know that."

Writing an essay, especially the type of essay typically found in My Seditious Heart - activist, political, heavily researched, exhaustively argued, potentially dangerous - sounds like quite a different thing from writing a novel, and in some ways it is, but in one important way, she says, it isn't: "An essay is a story," she says. "It is the work of a novelist. If it weren't, it wouldn't exist in the world today. It wouldn't matter."

My Seditious Heart, by Arundhati Roy, is published by Penguin Random House, $75.