Camaraderie of the trap setters 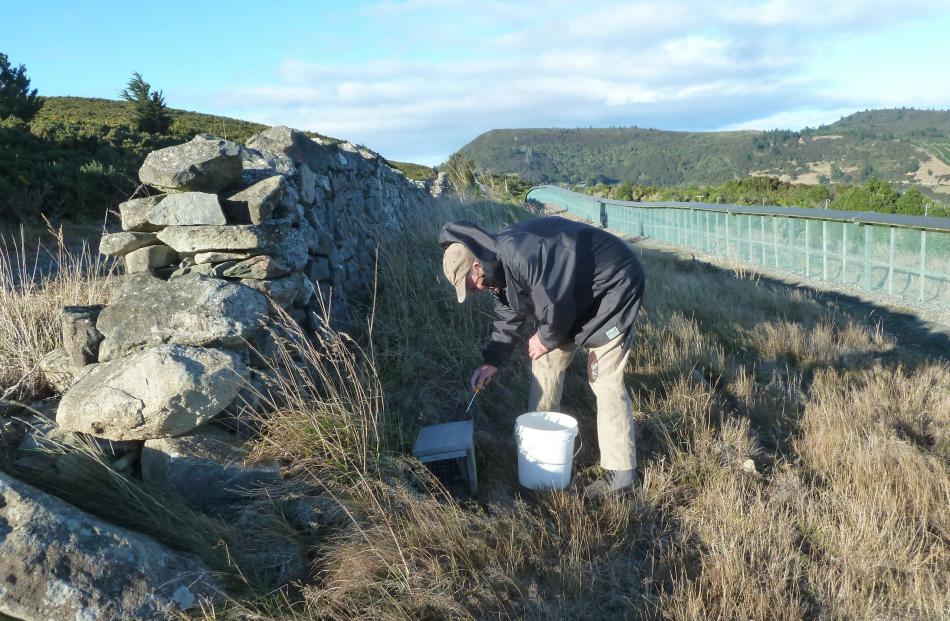 Bruce unscrews the protective cover over a trap to refresh the bait. 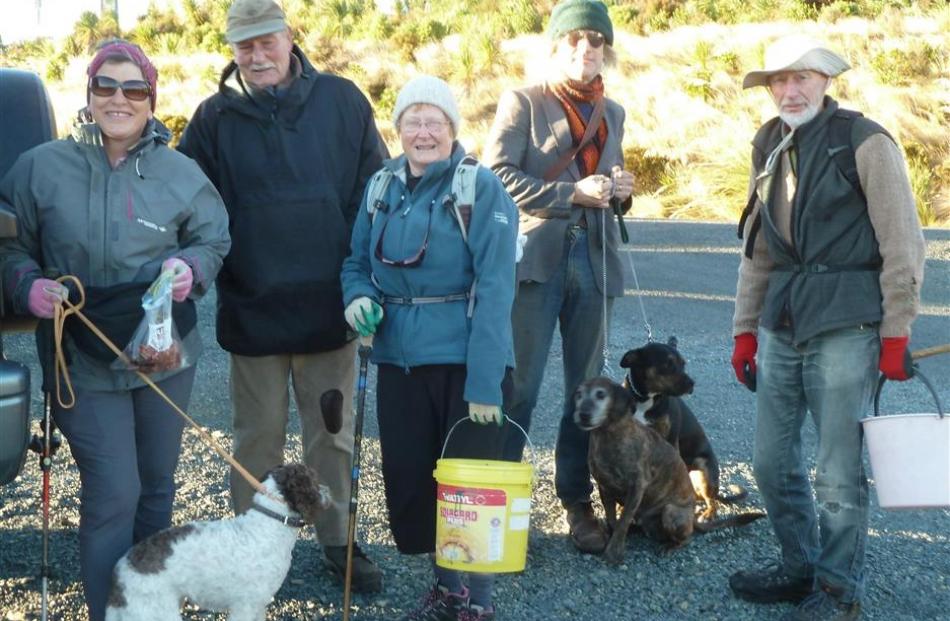 The assembled team ready to set off (from left) Chris James with Harriet, Bruce Cathro, Penny Love, Worik Stanton with Axel and Timmy, and Charles McLaughlin. 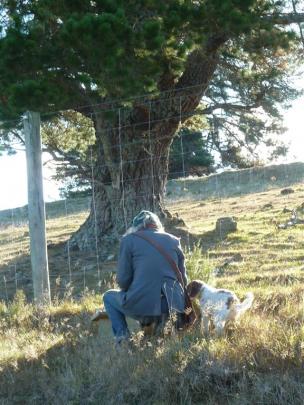 Harriet waits hopefully for Worik to throw out some discarded bait. 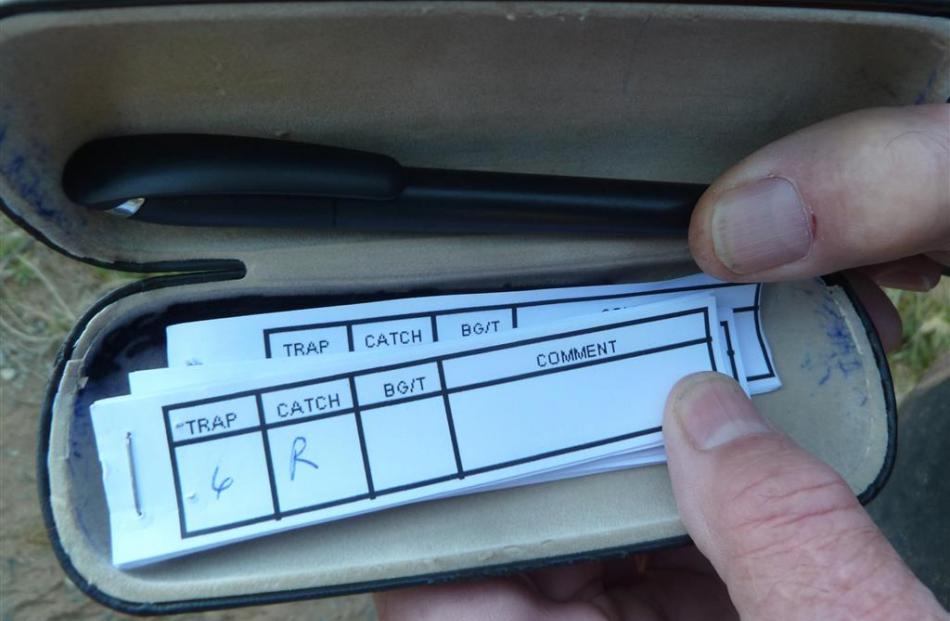 Recording the catch each day provides a useful overview of predator presence over time. Statistics are kept back at the ecosanctuary. 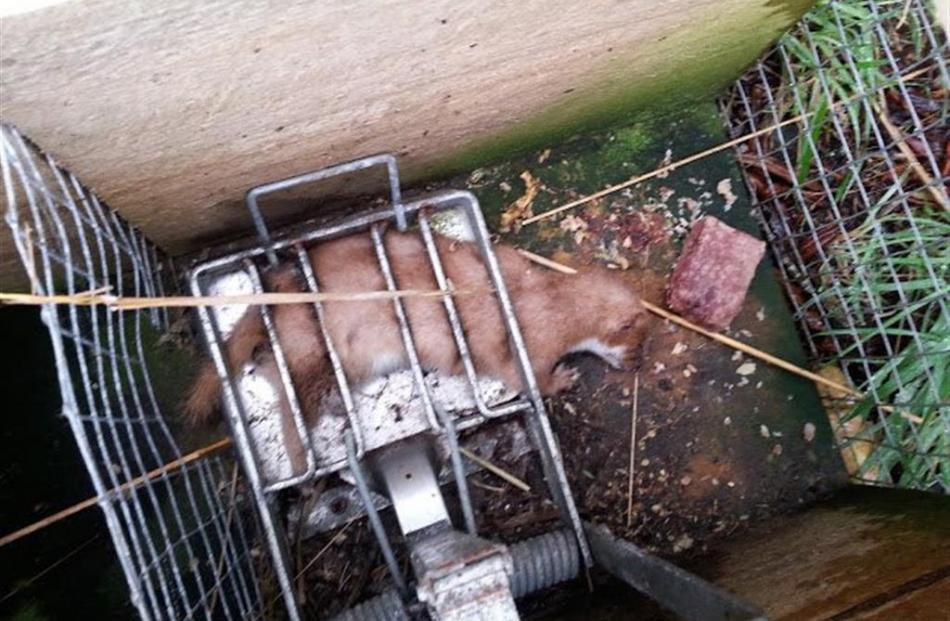 Emptying traps is not for the faint-hearted. Inflicting death on animals gives no pleasure, but a pretty animal can be a deadly killer.

Alyth Grant goes out with a trapping team to find out what is involved in the ongoing fight against predators at Orokonui Ecosanctuary.

The assembled team ready to set off (from left) Chris James with Harriet, Bruce Cathro, Penny Love, Worik Stanton with Axel and Timmy, and Charles McLaughlin.

Bruce unscrews the protective cover over a trap to refresh the bait.

Harriet waits hopefully for Worik to throw out some discarded bait.

Recording the catch each day provides a useful overview of predator presence over time. Statistics are kept back at the ecosanctuary.

Emptying traps is not for the faint-hearted.

Inflicting death on animals gives no pleasure, but a pretty animal can be a deadly killer.

That's what it takes for a morning clearing and setting traps around the perimeter of Orokonui Ecosanctuary.

A team of Orokonui volunteers sets off every two weeks in most weathers to tend the traps that are the first line of defence outside the Xcluder fence protecting the ecosanctuary.

Their catch of stoats, weasels, ferrets, rats and hedgehogs is a constant reminder of the ever-present threat to the precious wildlife within the sanctuary.

The team divides in two, going in opposite directions from the visitor centre down to the bottom gate.

Approximately every 100m there is a trap.

Clearing them sounds like a gruesome task and it is. Dead animals are not a pretty sight, especially when maggots are already present.

A pair of tongs to handle the carcass is highly desirable, and the box containing the trap needs a good shake to dispose of the maggots before rebaiting.

Even less enjoyable is the need occasionally to dispatch an animal that is trapped, but not killed.

Such unpleasant aspects to the job are mitigated by good company and chat.

The dogs are not necessary, but they provide plenty of entertainment.

For them it is a wonderful romp.

Harriet, small as she is, is not cowed by her much bigger mates, Axel and Timmy, tussling with them and racing along the track, grabbing the discarded bait from empty traps whenever possible.

Axel finds the remains of a rabbit he caught on an earlier run, and has another gnaw.

There'll be bad breath to be tolerated in the car on the return home!

But the dogs are in for some disappointment soon, as the fresh rabbit meat is to be replaced by a commercial product more attractive to stoats.

It is dried meat, similar to "jerky''.

Stoats are enemy No 1 for the ecosanctuary, and every possible improvement to the trapping regime will be tried.

But they are not the only pests that are dealt to.

In the course of a month, 12 hedgehogs, six weasels, six rats, 11 mice, two ferrets, seven possums and a rabbit were caught.

The incursion of stoats in 2015 reinforced how important this is.

Consequently, an initiative proposed by the Landscape Connections Trust to start trapping the "Orokonui halo'', using a workforce of local residents, is very heartening for Orokonui staff and volunteers.

Another of the volunteers, Bruce Cathro, commented that the "high kill rates provide clear evidence of the need for wider community involvement in eradication programmes''.

This season, robins have been observed on private land outside the sanctuary and as populations grow there will be more spillover.

Fortunately, some of Orokonui's neighbours are already trapping on their properties.

A co-ordinated project involving many willing locals collaborating to monitor bait stations and set traps, offers the hope of real success in the protection of the area's biodiversity.

That will bring as a reward the joy of seeing what have become rare birds present in our own gardens.

Today's catch was not remarkable: a few rats and hedgehogs, no mustelids.

Asked what kept them motivated to carry the work on, Bruce mentioned the "serious adverse effect the trapped animals have on our native birds, plants and small animals'', while Charles emphasised the need to reinforce the protection afforded by the fence to help keep predators at bay.

And there is always immediate reward to be had in "hearing the birdsong as we walk around, seeing native birds outside the fence and knowing that we are helping to keep them safe'', as Penny Love put it.

All of them know, as do those engaging with the "Beyond Orokonui'' project, that it is a long-term task, one that many citizens need to take up.

It was best summed up by Chris as: "Knowing that our closeknit team are helping to protect a special small remnant of bush and native animals motivates me to keep doing a necessary task. Hopefully, in the future, with more widespread trapping in the halo area, I will be able to take my granddaughter for a walk in the Silverpeaks and we will be overwhelmed by the songs of native birds.''

- Alyth Grant is a volunteer at Orokonui Ecosanctuary and an ONHT trustee.