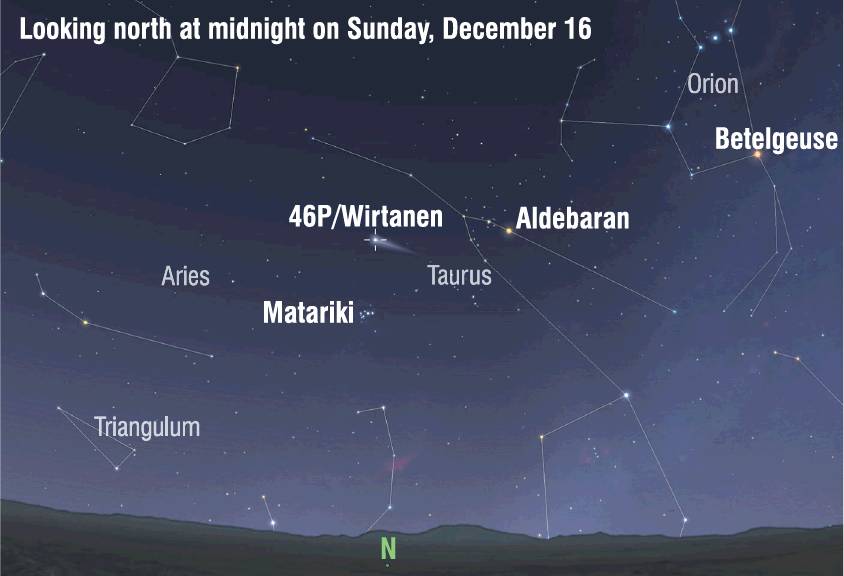 If sky gods are reading this column, I'm hoping they will look kindly upon Otago stargazers and give us cloud-free nights next weekend, writes Ian Griffin.

That's because there's the prospect of viewing a bright comet in the northern sky. With the moon setting just after midnight, the early hours of Sunday morning (December 16) will be just about perfect if you want to see the comet when it is at its closest point to Earth.

The comet is called 46P/Wirtanen. It was discovered back in 1948 by the American astronomer Carl Wirtanen, after whom the comet is named. Observations in the years since its discovery have allowed astronomers to characterise the comet fairly well; we know that it orbits the sun once every 5.4 years, and is just over a kilometre in diameter.

This year, the comet's closest approach to the sun occurs at the same time it is passing close to Earth, which means that it should be quite bright; indeed some astronomers are predicting that the comet should be very easy to see with the unaided eye once the moon has set.

On the night of Wirtanen's closest approach (when it will be just over 11 million km from us), it is passing fairly close to the star cluster Matariki, which can therefore be used as a helpful guide to finding the comet.

As our chart shows, in the early hours of Sunday, comet Wirtanen is in the constellation of Taurus, forming one apex of a broad triangle which includes the orange star Aldebaran and the star cluster Matariki.

If visible to the naked eye, it should appear as a dim circular green patch of light in the indicated position. If the predictions aren't quite right and the comet is dimmer than expected, it should still be easily visible through a good pair of binoculars.

It's been quite a while since a decent bright comet graced Otago skies, so, weather permitting, I encourage you stay up late on Saturday and try to spot this verdant celestial wanderer.