Consumed by quest to document the ways of the albatross 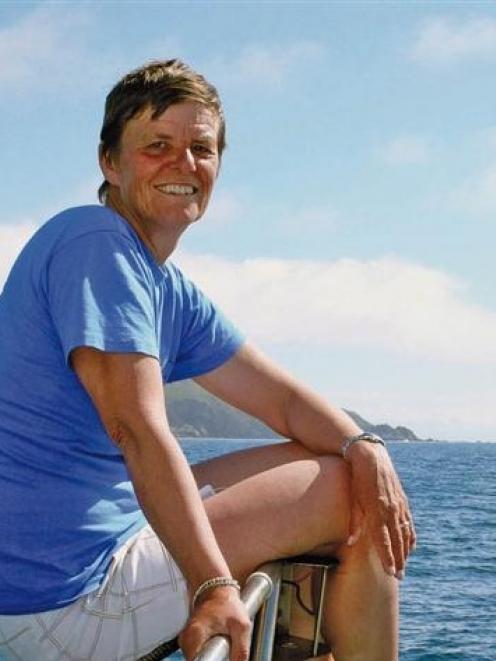 Over the vessel went, mast under water, as the man on watch crouched in the cockpit.

It was 5am and De Roy had been sleeping in her bunk.

Soon she was being rolled around the cabin, to the ceiling and back again.

From the tranquillity of her Golden Bay home, the nature photographer recalls the incident which wrecked the yacht's electronics, just part of a six-year, action-packed project that has culminated in the release of her book, Albatross.

"It's pretty wild out there but that's the world of the albatross."

On their next foray, De Roy and business partner Mark Jones headed for an even more challenging rock.

The Pyramid is an aptly-named pinnacle jutting from the seas off the Chatham Islands and home to the critically endangered Chatham albatross.

At 170m high, the island is almost as tall as it is wide.

Waves roll in from the Southern Ocean as rare visitors pile up on a steep, unprotected shore.

"You have to rush in by dinghy, ride the wave to get over the kelp, then leap up above the kelp and get up on the rock before the dinghy backs out."

The first people ashore then had to throw a rope to those still in the dinghy and haul their gear through the frothing waves, up the cliff, she says.

De Roy's quest to photograph the albatross has taken her around the world.

To find the Atlantic yellow-nosed albatross, she travelled 2800km from South Africa on a crayfishing vessel to Tristan da Cunha Island, the most isolated human community in the world.

Landing on Gough Island in the South Atlantic required clambering from a small fishing tender into a dangling rope basket and being hauled up a 30m cliff.

Bypassing the "extremely successful" northern royal albatross colony at Taiaroa Head for places that were truly wild, she became the first woman given permission to land on The Forty-Fours and The Sisters owned by the Chatham Islands iwi.

The 54-year-old, who spends half the year travelling, was raised in the Galapagos Islands by artistic parents seeking a self-sufficient, pioneering lifestyle.

As a child, she was free to explore the incredible surroundings and it was perhaps no coincidence that she turned to photography.

Although she shares her name with a native New Zealand bird - her parents found the name in a book about someone sailing around the Pacific - it was not until she was in her late 30s that she moved here.

That happened after she visited a Kiwi naturalist she had met while working on a tourist vessel in the Antarctic.

De Roy's rare wildlife images have been published in more than 30 countries but it is the albatross that has become her all-consuming passion.

"They're the most incredible, most awe-inspiring animals on this planet," she says.

"They're the largest flying bird and they live incredible lives in wild frontiers we can often only imagine."

Albatross fly at more than 100kmh and have been known to cover more than 1800km in a single day, she adds.

One bird fitted with a radio transmitter flew around the world in 46 days, while Toroa, the 500th chick hatched at Taiaroa Head, had travelled almost 40,000km since last September.

"And not only do they travel with such ease, they know exactly where they're going. Some tracked from the Chatham Islands were found to revisit exactly the same area, within 50km to 100km, off South Africa on the same date a year later.

"They wander the planet's oceans the way we wander to the supermarket."

But De Roy says most of the 22 species are endangered, with the biggest threat coming from high seas fishing fleets.

Natural scavengers, the birds are accidentally caught on fishing lines or on the wire ropes of trawl nets.

Several techniques have been proven to keep the birds away from the lines behind ships but the challenge is to get all fishermen to use them, she says.

That will require an international effort but New Zealand, being the albatross capital of the world with more than half the species nesting here, has a "tremendous opportunity" and a responsibility to lead the way.

"These amazing birds are only going to survive if huge strides are made and time could easily run out on them."