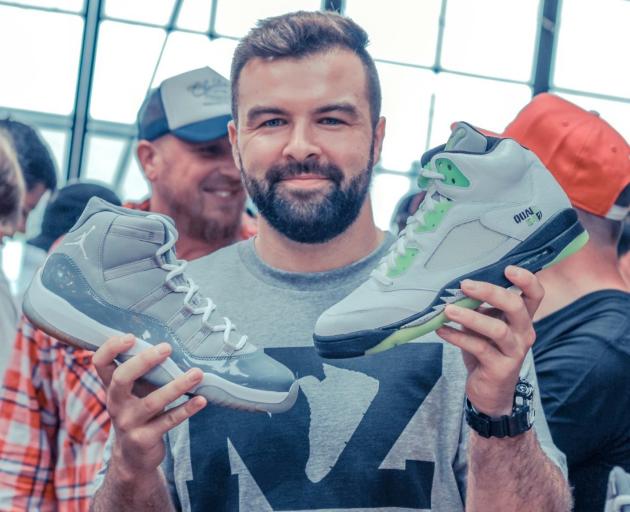 Sean McIntee gets his hands on some Air Jordans at a sneaker swap meet in Auckland. PHOTO: SUPPLIED
At 15, Sean McIntee spent all his savings on a pair of kicks.

Not just any shoes though. The $200 from his paper round got him Nike Dunks that were designed by alternative rock band Dinosaur Jr and inspired by the mammoth boots of 1970s glam rockers.

"They were full-on silver shoes with purple laces," the 28-year-old explains.

"They were actually quite outrageous."

Thirteen years later, McIntee owns so many limited edition sneakers that they are spread across his own home in Auckland and his parents’ house in Dunedin.

The interest began at high school, where he played basketball and soccer and noticed other athletes wearing interesting footwear.

Soon, he was fully immersed in a sneaker culture that had begun years earlier in the United States with the exploits of basketballer Michael Jordan and the emergence of hip-hop music.

He once paid $700 for limited edition black and white Yeezys from rapper Kanye West’s range of sneakers. 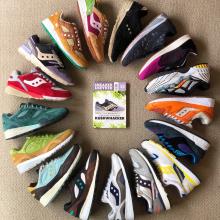 Some of his Saucony sneakers. The purple shoe in the circle and on the cover of the magazine was a collaboration between Sneaker Freaker magazine and Saucony.
The rarest among his 120 pairs are Allen Iverson Reebok Question shoes that were named for an NBA legend and made exclusively for Boston College basketballers — he estimates there are only about 20 pairs in existence.

And he still has an eye for the flamboyant. Bright green, furry sneakers — a collaboration between Nike and psychedelic rock band the Grateful Dead — were a recent online purchase.

Although he has spent "thousands" on sneakers over the years, McIntee says it is a hobby, not an addiction, and comes second to paying his bills. He buys all his shoes with the intention of wearing them but acknowledges that as collectors’ items, they would attract a premium should he ever want to sell them.

The recipient of an Otago Daily Times Class Act award in 2010, McIntee went on to gain a physical education degree and to play in the national futsal league. In 2014, he co-founded Sole Central NZ, the country’s biggest online sneaker forum and marketplace with more than 22,000 members.

His interest in sneakers has led to friendships with people he might not otherwise have met, he says. And it is not just a hobby. He works as New Zealand account manager for three footwear labels, including athletic brand Saucony that releases its own limited edition sneakers.

"Now that footwear is part of my job, it gives me an excuse to have so many."