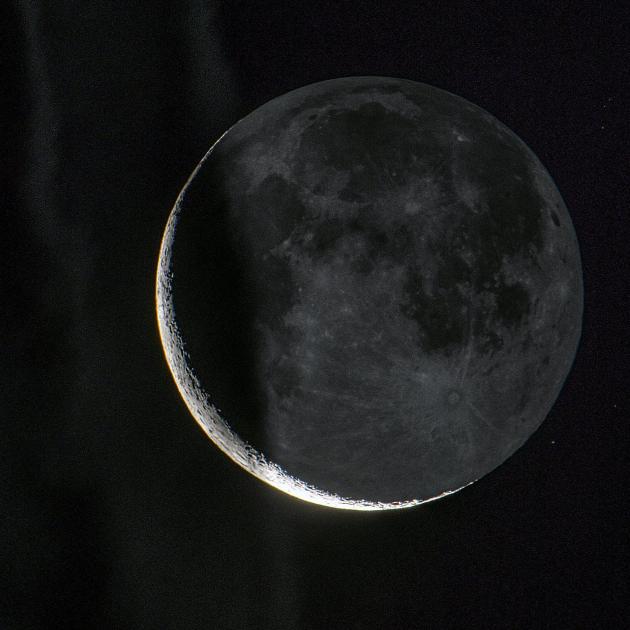 PHOTO: IAN GRIFFIN
A new moon occurred yesterday at 8.06am. The next few evenings are an excellent time to hunt its young waxing crescent. The moon will be tough to observe tonight — it is just 2% illuminated and its slender crescent sets shortly before 10pm. To find it, you will need binoculars and an uninterrupted view to the west. At sunset, the moon is just 10 degrees above the horizon; 30 minutes later, it will be just five degrees high.

While finding the moon will be tough tonight, tomorrow, at age 2.5 days, it will be a much easier target. The lunar crescent will be more than 6% illuminated, and our closest celestial neighbour will stand more than five degrees above the horizon an hour after sunset. If the sky is clear, tomorrow will be an excellent chance for owners of binoculars or small telescopes to study Earthshine.

Leonardo da Vinci was the first person to understand this phenomenon. In his Codex Leicester (written between 1506 and 1510), he explained how Earthshine is sunlight reflecting off Earth’s surface, illuminating the unlit portion of the moon. Another reflection from the lunar surface results in the ashen light we see when looking moonward. That's why Earthshine is sometimes called the Da Vinci glow, although it is much more commonly known as "the old moon in the new moon’s arms".

Earthshine is present at all lunar phases, but it is so weak we can only see it easily when the moon is a crescent.

Earthshine varies in brightness on a timescale of days as the angles between the Earth, moon, and sun change. It also depends on seasonal variations on Earth. For example, if it is cloudy or snows in winter, more sunlight is reflected towards the moon and Earthshine is enhanced.

It is hard to get a decent picture of Earthshine without burning out the bright lunar crescent. A few weeks ago, as I was photographing Earthshine, a convenient passing cloud obscured most of the bright crescent, resulting in a very lucky capture of a pretty scene.