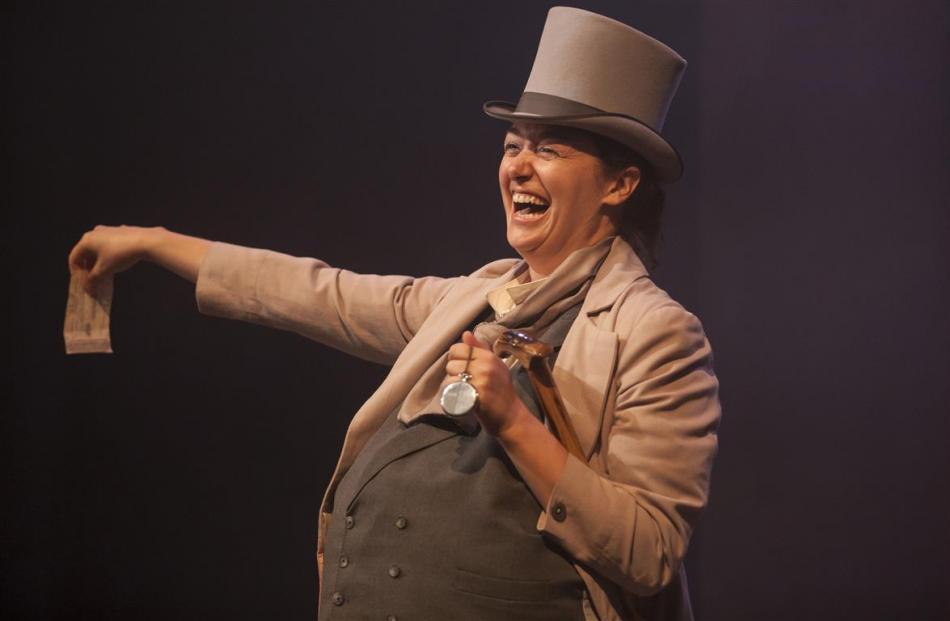 The Devil's Half-Acre is set in the slums of goldrush era Dunedin, when the powerhouse of New Zealand lay south of the Waitaki River. Photos supplied. 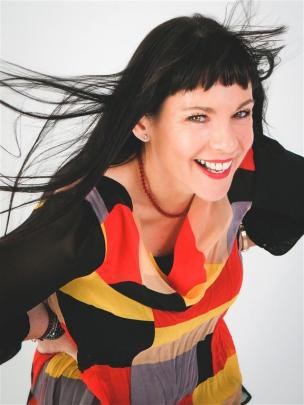 New Zealand comedian Michele A'Court contemplates all of the things she overlooked telling her daughter in Stuff I Forgot To Tell My Daughter. 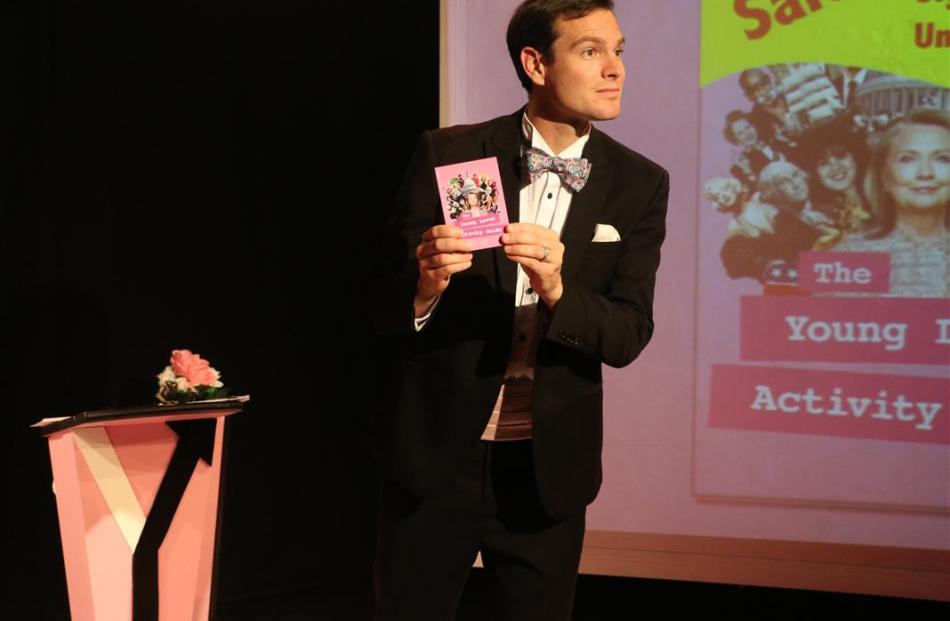 Arthur Meek portrays the overeducated and underachieving Richard Meros in On the Conditions and Possibilities of Hillary Clinton Taking Me As Her Young Lover. Actor, singer, writer and comedian Sheridan Harbridge stars as Marie Duplessis in Songs for the Fallen.

So says Nicholas McBryde, director of Arts Festival Dunedin, the biennial smorgasbord of theatre, music, dance, comedy and points in between, which will be held over 10 days starting on September 30.

That's two months away. That means he's rather busy.

''Because it is a two-year cycle, you tend to forget what it was like last time, until you are back into it and it all comes back again. This is now my, gosh, eighth festival out of nine.

''The preceding 18 months have been about devising the programme. It is potentially very stressful because there is a point at the beginning of the cycle when I have an empty canvas. Even setting the dates for the festival can be tricky.''

More recent challenges for McBryde and his small team include finalising the festival programme, which was launched two days ago at a ceremony at the Regent Theatre.

Those of a more organised bent might register that the festival's dates - September 30 to October 9 - dovetail into the school holidays.

That's no coincidence, McBryde describing the timing as ''a bit of a social experiment''.

''I want to see if that makes a difference to the 'catchment' we attract. By shifting it to that timeframe, we have unapologetically included a whole new feel. It is a shift. But we aren't changing the quality of the programme. It's about providing events that more people can embrace.''

He is referring to several productions aimed at children big and small, from the pantomime Commander Claire and the Pirates of Provence to teen-oriented hip-hop extravaganza Out of the Box to a concert by the acclaimed London Conchord Ensemble, which will perform a relaxed classical repertoire (for more information, see break-out).

''We have had comments before that the festival is a little bit expensive and elitist. Well, our ticket prices are cheaper than elsewhere. In fact, they are as low as I can make them.

''We are using the Regent Theatre for four performances of Commander Claire and the Pirates of Provence. And it's free. You can't get more accessible than that.''

Still, it's important to get the mix right, McBryde says.

''I have lived in Dunedin for 20 years and have worked in all the performing arts, so I know how they work. I feel confident enough to lead audiences into new areas but not pushing them so far that I lose them along the way.

''I have to be really mindful about that. I could put some really arty-farty material in the festival, but it might alienate too many people.

It's also a financial thing.

The event was rebranded Arts Festival Dunedin in 2014, in part because of the fallout from the 2012 event.

''We were back at square one, but at least solvent,'' says McBryde, who was reappointed director following the 2012 festival, the only one he has not helmed.

This year's festival has a budget of around $1 million, raised by funders and sponsors.

''It's not an inconsiderable amount to make a festival work in this part of the world,'' McBryde acknowledges.

Yet, as arts commentator Peter Entwisle noted in an Otago Daily Times opinion piece in 2014: ''Mounting such an event is an ambitious undertaking in a city of 120,000 people set in a sparsely populated hinterland at a considerable distance even from the other more populous New Zealand centres, let alone those of the larger world.''

Since the Otago Festival of the Arts Trust, a not-for-profit charitable organisation, was established in 1999 to present a biennial arts festival in Dunedin (the inaugural event was held in 2000), it has adhered to a philosophy of staging ''a boutique festival in a boutique city''.

''We need to primarily cater for this catchment by offering as much as our money can buy,'' he says.

''We do have to work smarter here, because we have certain idiosyncrasies in this marketplace. We have quite a small catchment from which to draw an audience as well as business partners and funding.

''I think Dunedin has quite sophisticated tastes. People are quite discerning; they can tell if something is not quite excellent before they go to it. You can't pull the wool over the Dunedin market, I believe.

''Dunedin does have its idiosyncrasies, such as a slower uptake of tickets. Having said that, several promoters are very keen to come to Dunedin while the festival is on because they get in on the action the festival creates.

''Also, the public's buying patterns change during the festival; they tend to buy tickets further in advance and buy more of them. And that's the whole point. It's about having a bit of a feast.''

McBryde's balancing act extends beyond a weighing up of artistic sensibilities.

As arts festivals have grown (particularly in the past decade in the southern hemisphere) so, too, has the depth of artists and performers.

In short, there is now what might be termed a festival circuit.

However, the connective tissue among festivals is, well, a little fragile.

''I spent a lot of time brokering or trying to convince other festival organisers to sign the same act,'' McBryde reflects.

He points to the forthcoming Arts Festival Dunedin show Songs For The Fallen, a celebration of 19th-century Parisian courtesan Marie Duplessis.

Known to history as the Lady Of The Camellias, Duplessis died at 23 but has been an inspiration for works ranging from Verde's opera La Traviata to the musical Moulin Rouge.

''Now, I went across to Australia last year to have a look at it, then actually on-sold it to Auckland Live, the Nelson Arts Festival and the Hawke's Bay Festival. That means the troupe has gone from the Adelaide festival to a four and a-half week tour of New Zealand based around festivals.

''So my choices are not just influenced by what I'd like to do, but by these other considerations.

''I might want a really nice show but not have other festival partners to support me, so I'd have to let that show go. But I never let on what I have had to drop because that would just lead to a sense of disappointment about what's not in the festival.''

McBryde's methodology this year included, at least in one instance, an immersive approach that involved him heading to Wellington to see The Devil's Half-Acre, which premiered at the New Zealand Festival in March.

He subsequently gave the Trick of the Light production team (responsible for The Bookbinder) some feedback on how it could be better tightened for an Otago audience.

''They are reworking it a bit to make it slightly smarter. Of course, that happens with many new productions as they progress. I think there has to be a level of respect and trust between parties for that to occur.''

Set in the slums of Dunedin during the gold rush, the theatrical presentation conjures a place of brothels, opium dens and gambling joints, and has been described as a Faustian tale set against a backdrop of political manoeuvring.

It's not the only politically and/or socially inclined commentary at this year's festival.

''I think Michele A'Court's Stuff I Forgot To Tell My Daughter is very topical,'' McBryde says of a show in which the New Zealand comedian ruminates on when her daughter left home and how she, as a mother, runs through a checklist she wishes she had passed on.

Others on his shortlist include What I Have Found To be True: an evening with Michael Leunig, the internationally acclaimed Australian artist, who will share his love of cartooning and human observation while talking and drawing at the Glenroy Auditorium.

Then there is On the Conditions and Possibilities of Hillary Clinton Taking Me As Her Young Lover, in which playwright and actor Arthur Meek portrays an overeducated and underachieving man (Richard Meros) who launches into an anarchic address.

Its key point: that by taking him as her young lover prior to the 2016 United States presidential election, Hillary Clinton will attain the world's highest office and initiate a golden age of Western culture and society.

A month before the real election is held? Impeccable timing?

''You couldn't get more topical.''