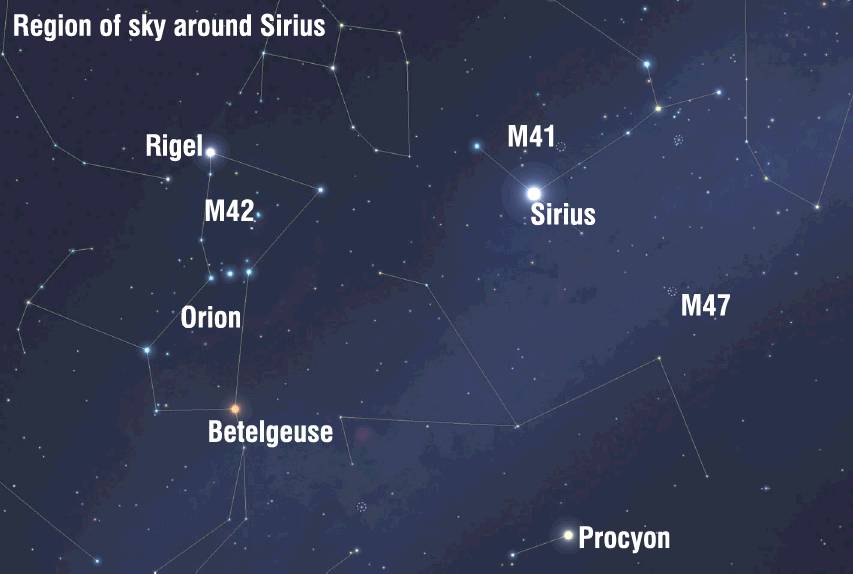 Many people get given a pair of binoculars or a telescope as a Christmas gift. After the excitement of looking at the moon, it can sometimes be hard to figure out what to look at next, writes Ian Griffin.

That is why in this week’s column, I thought I would highlight some beautiful objects that are high in the sky after sunset at the moment.

In particular, I want to focus on the region near the star Sirius. This is the brightest star in the heavens, so there’s really no excuse for not being able to find it! If you haven’t tried seeking Sirius, the constellation Orion is a helpful guide.

Just extend an imaginary line up and to the right of the three stars which comprise Orion’s belt, and Sirius is the first bright star you come to.

Sirius is a pretty amazing star. Astronomers have measured its distance and, at just over eight light-years away, it is relatively close to us on a cosmic scale.

Despite its cosmic proximity, travelling at a speed of 300,000km every second, the distance to Sirius is still so immense that the light you see when looking at it began its journey back in 2011.

Sirius is the brightest star in the constellation of Canis Major, the large dog. This part of the sky is teeming with nebulae and clusters of stars, which make it well worth exploring with binoculars or a telescope.

Back in the 18th century, a French comet-hunter called Charles Messier was always confusing dim star clusters or nebulae with comets. To avoid confusing comets with these objects, he decided to make a catalogue of galaxies, nebulae, and clusters.

This meant that when he found something that might be a comet, he could check its position against this catalogue. Luckily for us, this Messier catalogue contains some beautiful objects and to this day, provides a good starting point for newbie astronomers.

Of course, Messier 42, the Orion nebula, is well known, but the star clusters M41 and M47 in Canis Major are well worth checking out.