A good reason to stop in ... Ashburton 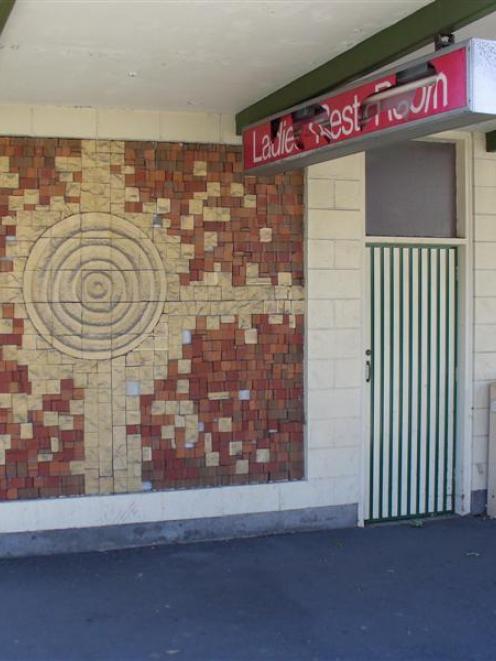 The distinctive exterior of the now-closed Ashburton women's restroom. Photo by Peter Donaldson.
In the early part of our courtship, the man in my life endearingly described me as wrong-headed and stuck in the '70s.

That may explain why a highlight of many a stop in Ashburton for me has been a visit to the Ladies Rest Room, in Tancred St.

The yellow, cream and brown brick pattern on the outside of this little gem, built in 1970 by the Gillard Brothers at a cost of $14,941, made me feel instantly at home.

Inside, it was always clean and roomy enough to hold a party (ladies only, of course).

If you were already suffering from the aftermath of a party, the pink and maroon striped doors might have been a bit much, but I loved them.

If I had been one of those wonderfully organised ladylike types I could have filled up the Thermos from the boiling water dispenser, too.

Alas, such luxuries are no longer available from the Ladies Rest Room. It is closed.

Ashburton District Council roading and street services contracts engineer Tony MacPherson said leaking skylights meant patrons (or should that be matrons) dashing in to shelter from the rain could continue to get wet.

New toilet facilities have been provided in nearby East St - which include a baby changing area - as it was considered repairs to my beloved building would be too expensive.

Redevelopment of the block including the restroom was being considered and Mr MacPherson said it was unlikely even the facade would be retained.

It would be fair to say he was rather surprised by my affection for the 1970s swirl on the outside wall.

Ever so gently, he suggested I might get over my disappointment by taking in some of the other attractions of the town.

I interrupted him by praising the foresight of the town in having its skateboarders visible from the main drag, not tucked away like an ugly secret.

He said as well as admiring their skills, I could visit two of the town's largest building projects - the Somerset redevelopment, which includes shops, offices, a cafe and a bar, and the new performing arts theatre.

During our chat, he told me the town was considering a new slogan to replace its baffling " Whatever it takes", which, he said, some "clowns" had reduced to " whatever" on one of the town signs.

A town where people have a sense of humour - that sounds like reason enough to keep stopping in Ashburton, even without a 1970s Ladies Rest Room.